Since the experimental emergence of multi-channel surround-sound in 1952’s. This is Cinerama (a documentary made to showcase a new widescreen projection format), the technology has arguably enriched movie-watching more than anything else – including popcorn. Superman no longer sounds like he’s flying in tiny circles around the telly, and sound fields can be so enveloping you duck for cover when bullets fly over your head. 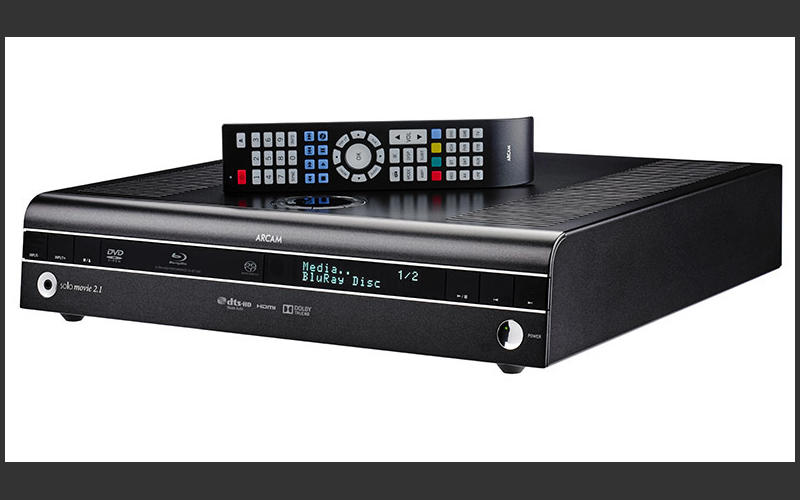 A 2.1-channel home cinema set-up (simply a stereo presentation with the addition of a subwoofer) may seem antiquated in the face of today’s 5.1.7.1 and Dolby Atmos configurations. But we are far from retiring the format to the Museum of Idle Technology, for it’s sail worthwhile to those without the space or desire for surround sound.

“The Solo Movie 2.1 makes the original iteration seem partly furnished. It adds Blu-ray support and more connections than most could make use of”

If that sounds like you. and the idea of a combined hi-fi and home cinema set-up – with speakers either side of a telly – seems particularly attractive, let us introduce you to the Arcam Solo Movie 2.1: an amplified all-in-one system that features a Blu-ray and CD playback, myriad connections and hi-res audio network streaming

The clue’s in the name

It’s no surprise there aren’t many of the Arcam’s kind around. But we reckon that somewhat plays into its hands. If its name isn’t enough of a giveaway, the Solo Movie 2.1 caters more for AV duties than its counterpart in the range, the Solo Music.

It shares its 160W amplification (80W per channel), HDMI inputs and hi-res audio playback, but adds to the disc drive’s support of CD/SACD with Blu-ray and DVD. and is able to decode Dolby TrueHD and DTS Master HD audio formats too. It asks only a reasonable more for the extra functionality.

“Multi-channel surround-sound technology! has arguably enriched movie-watching more than anything else – including popcorn”

The well-equipped Solo Movie 2.1 makes the original 2008 iteration seem only partly furnished, by adding not only Blu-ray support, but also more connections than most households could probably make use of. Joining one HDMI output are four HDMI inputs, single coaxial and optical inputs that support up to 24-bit/192kHz and 24-bit/96kHz respectively, and USB (also compatible with 192kHz files), phono and 3.5mm connections.

An ethernet socket caters for wired network streaming, although a supplied antenna puts wireless connectivity on the menu too. Either way. the Arcam will stream FLAC, WAV and A1FF files up to 24-bit/192kHz. AACs up to 24-bit/96kHz and the usual WMA and MP3 formats.

There’s another antenna for aptX Bluetooth, and a FM/ DAB/DAB+ tuner too. How you flick between the inputs – through the on-unit controls, remote control or mobile app – is up to you. All are pleasingly intuitive and responsive – just note that the latter is available only for Apple devices.

It doesn’t play up to the 4K fad. mind you. 4K Blu-ray discs aren’t welcome, and as the HDM1 inputs are version 1.4 (not 2.0. which can carry a 4K signal) there’s no option to add Ultra HD Blu-ray playback into the system either.

It’s a good job the Solo Movie 2.1 is such an impressive performer with Full HD material then. Spielberg’s The BFC looks appealingly bright and clean, the live-action sequences crisp and detailed enough to highlight the film’s excellent production.

When the giant jumps over hills, the picture doesn’t jump along with him and there’s real texture to patchwork quilts and mountainous landscapes. With bat-like talents, the Arcam proves perceptive in night scenes and in the darkness when we enter the giant’s lair. Clarity and sharpness levels are easily on par with those of a decent standalone player – not just with Blu-ray playback, but during the upscaling of DVDs too.

Not forgetting the Arcam’s sonic responsibilities, we turn our attention to the film’s John Williams score and our positive impression is instantly bolstered. The orchestra’s string section climaxes with apparent ease, power and authority in copious supply.

That’s partly down to the Solo Movie 2.1 being blessed with Class G amplification, which essentially switches between multiple power supplies to deliver a lot of output (needed for a big. powerful sound) without wasting electricity as heat or causing distortion.

Like the giant, it’s big and friendly, not throwing its weight around bullishly but rather conducting itself with poise and precision. There’s muscle behind falling metal bins, creaking beds and axes being forcefully driven down onto tables, but it’s pleasingly subtle with it.

Physically, the Arcam’s presentation is entirely front-heavy and thus no stand-in for a surround-sound experience. It still has the size and expanse to spread the orchestration to the comers of a room and make it sound like the giant’s stomps are landing right in front of you. though. They are full of solidity and punch, traits that extend up the frequency range.

You wouldn’t need particularly expressive kit to instantly recognise the giant’s West Country burr, but the shrewd Arcam ensures it is well projected. Further up the spectrum, chiming town bells have more jingle than a Frank Sinatra Christmas album.

“This is a particular product for a particular | crowd – in the Arcam’s case, someone who isn’t interested in surround-sound or 4K”

Despite its name advocating a preference for movies over music, the system, like a scrupulously fair parent, really isn’t discriminatory so can be trusted as much with a collection of CDs as Blu-rays. We choose Red Hot Chili Peppers’ Blood Sugar Sex Magik album and the Solo Movie 2.1’s even balance and naturally compelling combination of power, size and insight comes to the fore in the eponymous track. There’s thrust to the opening drumbeat, impetus behind John Frusciante’s electric riffs, and clarity to Anthony Keidis’ vocals.

The application of Arcam’s ‘bringing music and movies to life’ maxim may be intended across the brand’s expansive portfolio of AV and hi-fi kit, but it also singularly pertains to the Solo Movie 2.1.

Of course that talent doesn’t change the fact that this is a particular product for a particular crowd – someone who isn’t interested in surround-sound or 4K. and who perhaps has access to smart apps elsewhere.

Those who want the former can always consider the Solo Movie 5.1. which – you guessed it – can cater for surround speakers. Or if AV duties are already covered, why not save a few bucks and go for the Award winning Solo Music?

But those who do meet the criteria and are looking for a 2.1 channel set-up should strongly consider putting this almost-does-it-all box at the heart of it