With the advent of innovative devices like the Chromebit computer on a stick, we’re likely to see monitors take on a greater part in computing other than just being a dumb display. 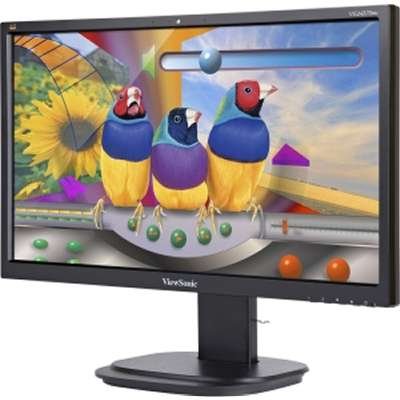 The ViewSonic VG2437Smc is one of those monitors that try to be more than a simple adjunct to your computer, though inherently it needs that part too.

To the casual observer the ViewSonic VG2437Smc is a 23.6″ widescreen LCD panel with a natural resolution of 1080p and an ‘A’ grade power rating.

It uses ViewSonic’s own SuperClear MVA technology to deliver punchy colours that anyone who has seen IPS displays will recognise. However, that aspect doesn’t make it ideal for the high frame-rates that gamers might need.

The standard inputs are VGA, DV1 and Displayf ort, and the inclusive stand offers a range of positional adjustments, including full rotation. ViewSonic also gave it 2W speaker, about which we’ll talk no more.

ViewSonic alone makes at least ten monitors the same size as this one, and with the exception of the 1ms gaming panels, they’re almost all cheaper than this one. Why?

It has a small collection of features that ViewSonic added, with the idea being to sell this as an all-in-one video conferencing solution. To that end, it’s given it a 2MP webcam, a microphone jack and a microphone, all plumbed through an on-board USB 2.0 hub.

I was slightly irritated that this wasn’t a USB 3.0 one, as that would have made it marginally more useful. But the USB hub is there almost exclusively to service the webcam, which wouldn’t be advantaged by the faster technology.

I’ll be honest and say directly that I was disappointed at this interpretation of an ‘all-in-one video conferencing solution’ when it omits to mention that doesn’t include a computer or even any pointers to finding some conferencing software.

It didn’t even put a link to Skype or Hangouts on the driver disc, disturbingly.

The camera, revealed in the ‘Devices and Printers’ panel is a BisonCam NB Pro, which appeared on many Asus laptops a while back. It’s fine as these devices go, but it’s not at the bleeding edge of webcam technology.

You can buy a webcam of this quality for less than £20 and attach it to any monitor, and get pretty much the same experience.

So what’s good about this screen? The display is a good-quality one, and ViewSonic did include VGA, DVI, USB and audio cables, though no Displayfort line.

In constructional terms, this is plastic over a metal chassis, but the bezel is nice and thin, and ViewSonic resisted temptation and left the power supply inside and not in some horrible external box.

My major complaint here is that what’s included as a distinctive feature here just isn’t special enough and could quite feasibly be added to all ViewSonic’s displays at minimal cost. Being a ‘VG’ series monitor, this design is aimed squarely at business customers, who hopefully won’t worry about the cost as much.

A high-quality business monitor with a built-in webcam.