GREAT PROTECTION, PRICE AND FEATURES, BUT A SLIGHTLY ANNOYING INTERFACE GETS IN THE WAY

TREND MICRO MAXIMUM SECURITY – Trend Micro scored well last year, but the main thing that put us off was the high price. This year, Trend Micro has reduced its pricing, making its software quite a bargain. We reviewed Maximum Security, which has support for up to two devices (a four- and six-device option is available). Maximum Security also contains mobile protection, if that’s something you require. 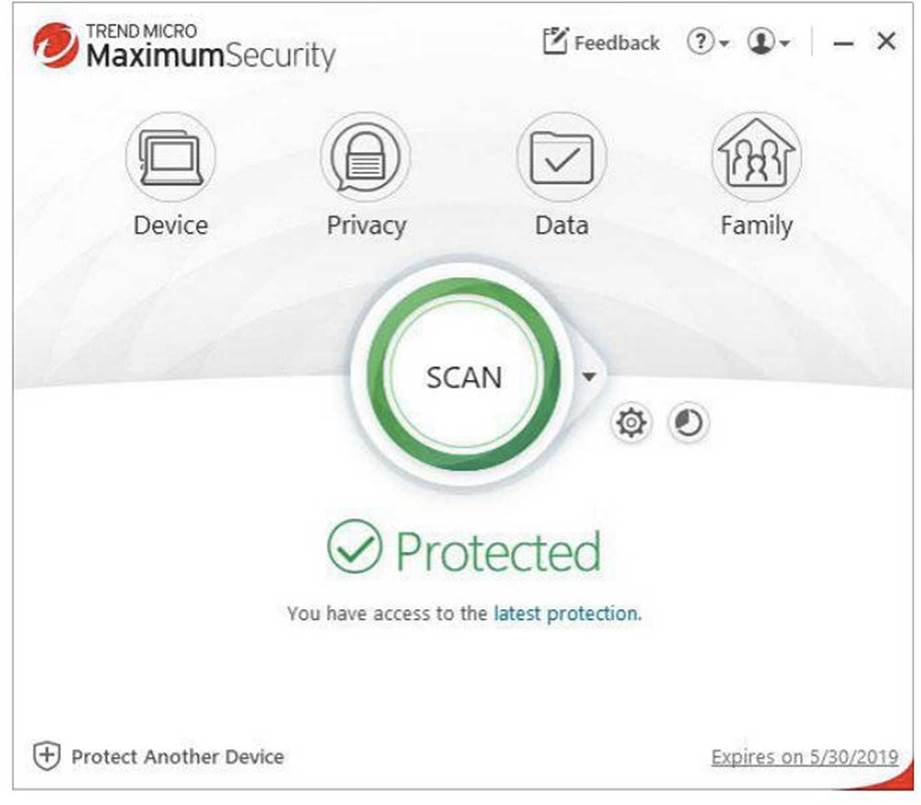 While the price has gone down, the level of protection hasn’t. In our tests, Trend Micro Maximum Security scored a total accuracy rating of 97%, which shows just how good this software is.

Maximum Security scored a protection accuracy rating of 94%, managing to detect all 100 threats, blocking 97 and neutralising one further threat. However, that meant that two threats compromised the test systems. Even so, that puts its protection just under the top performers in this test.

Scoring a 98% accuracy rating in the legitimate software test showed that Trend Micro didn’t stop too many bits of good software from being installed, either.

Trend Micro Maximum Security comes with a whole host of add-ons and extras. Sadly, Trend Micro hasn’t updated its interface, and all of the options are buried in annoying, animated menus that take several seconds to whizz around the screen each time you click a button. Simpler menus should be par for the course.

The interface is divided into four sections: Device, Privacy, Data and Family. Device lets you configure the anti-malware elements of the software, with options for both its real-time and scheduled scans. Most options are explained reasonably well, so you won’t have to go looking for explanations online.

From Device, you can also perform a PC Health scan, which looks for resource-heavy startup programs, junk files and out-of- date versions of Internet Explorer and Flash Player. It also checks your user account settings to see if there are any ways you can easily bolster security. It’s not particularly pushy or over-dramatic about these ‘threats’, which is refreshing. The Mute mode is handy, stopping Trend Micro from bothering you with popups and the like.

The Privacy section offers up a privacy scanner that checks your social media feeds via a browser toolbar. It also checks your browsers for privacy settings such as Do Not Track. Finally, there’s a data- protection tool that will prevent you and other people who use your PC from typing in personal information, such as credit card numbers, and sending it over the internet. You can turn on social media protection, which scans links shared on popular networks, preventing you from being tricked into visiting malware-infected sites.

The Data tab contains a file shredder, password manager and a tool that can scan your OneDrive files for malware without having to download them locally. It’s an interesting if rather niche idea that lets you keep files you don’t trust at arm’s length, in the cloud, before downloading them. Then again, if you’re that worried about a file’s security implications, you should probably avoid it altogether.

The Data tab also has ransomware protection, with Folder Shield.

Once enabled, the folders you’ve set to watch are monitored by Trend Micro; any suspicious activity is blocked and reported.

It’s good to see a password manager included, which lets you create and share secure passwords between all of your devices.

The final tab lets you set up parental controls, with the ability to set adult content filters, limit the use of certain programs and generate reports about what your children get up to online.

With the new lower price but high levels of protection, Trend Micro Maximum Security is now a great choice. Certainly, if you’re running this software already, there’s no reason to change to something else. However, Kaspersky Cloud Security has the best protection and range of features.

RATHER THAN BEING an all-new product, Kaspersky Security Cloud appears to have been built around the existing Total ...
£19.99 Buy It Now
Read full review
8 Total Score
Trend Micro Maximum Security

Trend Micro Maximum Security has an easily navigable interface, great protection, and the price is right. Some of its privacy features didn't work reliably in our tests, but the cloud protection scanning is an interesting feature, and Mute Mode is a great take on the usual gaming mode feature. Overall, Maximum Security is a good choice for antivirus on Windows.