Salix linux review – When it comes to choosing your next distribution, anything based on Slackware tends to fall out of favour. That’s not saying that Slackware is bad by any means, but it’s instead statement to the level of improvements made throughout some of its competition. One of the main Slackware-based distributions that has generally held up well over the years is Salix, generally considered the premium choice for all of those who are seeking a CPU friendly slice of Slackware on their machine. Its latest edition (14.2) is actually based around the highly customisable and extremely lightweight Xfce 4.12 desktop environment. 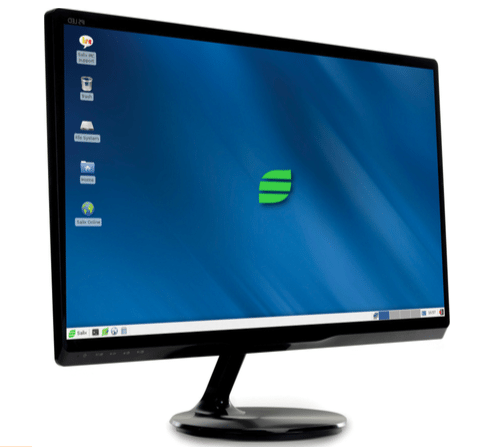 One of the first major changes that will instantly become noticeable to new and seasoned Salix users alike, will be the integration of a new boot menu. Salix can now be booted and installed in a variety of languages, and we found no slowdown throughout this new-look boot process. When you reach the desktop for the first time, your eyes are in for a treat. The Xfce i ntegration has helped really lift the way Salix both looks and functions, making general usage much quicker, snappier and unlike many of its Slackware- based competitors, easy. We especially liked the widget theme used here; it’s clean, simple and minimal in its approach.

It’s remarkably hard to compare it to other graphical boot managers and it’s near faultless when in use.

Looking past its attractive exterior, Salix now boasts two new GUI system tools. GUEFI has been built for use on 64-bit machines, and acts as graphical boot manager for UEFI systems. It’s remarkably hard to compare it to other graphical boot managers and it’s near faultless when in use. If you want to be able to create and manage UEFI boot entries, GUEFI is a more- than-capable boot manager. Equally as important is the gtkreposesetup tool, which is a decent addition when it comes to selecting a repository mirror. Closely linked to this is the news of a new repository that comes stacked with a large number of available packages. Named ‘extra’, many of the bundled packages are built from SlackBuild scripts, and it’s likely that the number of packages within will continue to grow over the following months. Similarly to most of Salix, ‘extra’ simply works well.

As you’d expect, much of the bundled software within Salix 14.2 has been chosen with looks and key functionality in mind. Firefox has now been implemented as the default browser, while the fantastic NetworkManager tool handles all network configurations. Perhaps the biggest inclusion, in our

eyes anyway, is the use of PulseAudio. It’s proven to be one of the best apps available to Linux computers when it comes to bridging the connection between desktop audio and wireless speakers, which it does well when using Salix. Of course, all the usual suspects are included, such as Gimp, LibreOffice and Zim. Perhaps a little disappointing is the lack of updates in the collection of bundled Salix System Tools. Sourcery still remains a great choice for general package management, but updates between the rest of the collection are few and far between. With Salix 14.2 bringing some big changes, it seems a strange move to do little in terms of Salix’s own in-house programs, but we’ll keep an eye out for updates in later versions of the distro.

Slackware still remains a fan favourite for those with a rich history in the OS. What Salix shows, is that Slackware can indeed keep up with the new kids on the block. The latest 14.2 update goes far beyond a facelift, and instead showcases some great new GUI tools, a superb new repository and a decent selection of bundled software, even if it’s a little uninspiring at times. If you don’t think Slackware is for you, we implore you to take Salix out for a test drive. Interested users can head across to salixos.org for all of your necessary downloads.