A long with the Asus ROG Centurion, the Roccat Kave 5.1 is one of the few true surround headsets currently on the market. It’s available in either an a nalogue version that requires you to already have a surround-sound card, or in the digital version we re looking reviewing here, which comes with its own USB adaptor.

The adaptor is similar In many ways to that of the Asus. including a volume knob that also doubles as a volume control for each set of drivers, and it has outputs for analogue surround speakers.

Incidentally, you could also just plug stereo speakers Into the front speaker output If you don’t have surround speakers. 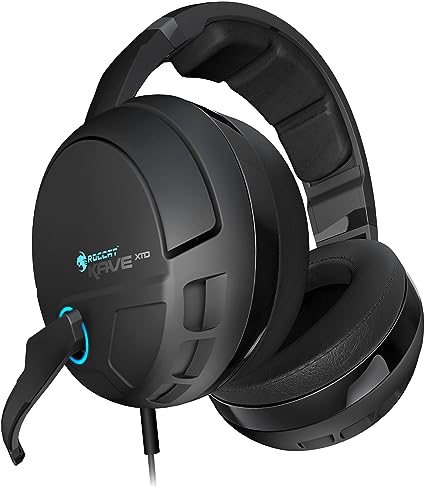 It also Includes Bluetoolh support, which enables you to use your headset to make catls, although you can t listen to music from you r phone with it. Plus there are buttons for the mute function, and for switching between movie and game modes, although the latter isn’t massively useful. What would be useful is a way to switch between stereo and surround modes, but this function is only being handled by the driver, which Is a shame.

The unit itself is mostly easy to set up, but it isn’t perfect. The cables are tethered, so you can’t replace them, and the volume control simply doesn’t go low enough either. While you can adjust the volume in Windows, even with the Windows level at 50 per cent, the lowest setting on the external control was a long way from being whisper-quiet. On the plus side, those tethered cables are long, with each stretch – from the computer to the adaptor and from the adapter to the headset -being 1,8m long.

Meanwhile, the headset itself is mostly finished in fetching matt black – it looks good, although it doesn’t have quite the flare of the SteelSeries or the muted appeal of the Razer It’s well made, though, and very comfortable to wear. In fact. It’s the most comfortable headset on test, mainly due to the excellent padding and Its leather covering. Like the Corsair, the padding is property contoured to provide a snug grip around the whole of your ear. making for a secure but not tight grip.

Roccat also has an interesting rotation system for its microphone. It uses a standard phono socket to attach the mic. and then simply relies on the fact that the connector’s shape is round to allow the microphone to be rotated in and out of talking position. This setup does work, but it could be prone to wearing out.

Finally, we come lo sound quality, which is where the Kave 5.1 Digital is a tale of two halves. In stereo, the modest bass presence and middling detail levels make music sound a little lifeless.

In contrast, though, the surround gaming performance is very good, at least in terms of raw positioning. It isn’t the most balanced and integrated sound, with each driver sounding distinctly separate. This balance can be adjusted, but Asus ROG Centurion offers a superior out-of-the-box experience.

The Roccat Kave 5.1 Digital gets a lot right, and it’s great that the company is still committed to making true surround headsets. The Kave 5.1 is comfortable to wear, has a good range of features and its gaming surround sound works well, even if you have to tweak it a little. However, the lacklustre stereo audio performance, a few design niggles and a high price means it’s not a convincing all-out winner. If you’re looking for a true surround headset, it’s worth paying the extra £20 to buy the Asus ROG Centurion instead.

Extremely comfortable and offers good surround sound in games, but the Asus ROG Centurion Is a superior headset in this league.

Extremely comfortable and offers good surround sound in games, but the Asus ROG Centurion Is a superior headset in this league.