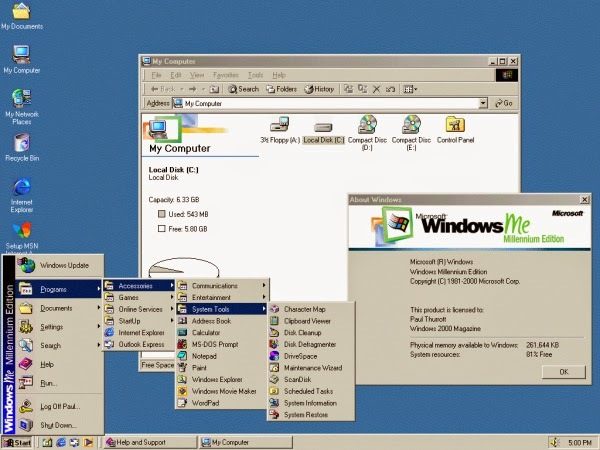 Not all technology memories are happy ones

Windows 8.1 has a lot of users in a flap over its tiles, style and the way it works. It’s different, but it does work and it’s pretty quick as well.

Windows Vista, the last ‘bad’ operating system from Microsoft, was met with pretty much the same scorn. But once you apply a service pack or two and a few updates, and if you take a moment to tweak behind the scenes, Vista actually becomes a half-decent OS.

Before 8.1 and Vista, though, was something far worse. An operating system that Microsoft would really want to brush under the rug once and for all and, in the process, wipe everyone’s memory of such a thing ever happening. That OS is, of course, the ill-fated Windows ME. But it can’t be all that bad, can it?

Windows ME (Millennium Edition – or Mistake Edition) started life on September 14th 2000, as a follow-up to the incredibly good Windows 98 SE.

ME was supposed to be the one OS to finally bridge the gap between consumer editions of Windows and the business stability of the NT kernel. Unfortunately, things didn’t go quite to plan, and the connecting project, which would have brought the NT code into the mainstream consumer systems, was eventually dumped. Interestingly, the code that was worked on would eventually be used once more in the Whistler project, which ultimately became Windows XP.

Windows ME, despite being rushed to the shelves, did promise a better overall system than the current consumer edition, Windows 98SE. Microsoft bragged about faster boot times, better support for the emerging USB devices, better support for scanners and printers, better support for online connectivity and collaboration as well as network technologies, improved power management, and far better media resources. What the users got, though, was something rather different.

Windows ME was plagued with problems from the moment you put the disc in the drive. The installation routine was buggy, the initial setup was buggy, the initial login was buggy. If you somehow managed to escape the Blue Screen of Death during the setup, then you would soon discover an operating system that crashed randomly, didn’t install the right drivers and somehow managed to wipe and corrupt software that was installed on another drive.
After only a year of being made available, the plug was pulled on ME, and it was quickly replaced by the immensely better Windows XP. Microsoft then did the digital equivalent of taking the failed OS out into the desert and introduced it to the business end of a loaded gun.

Nope, we couldn’t think of anything either.

Windows ME, Microsoft’s bad memory. At least you provided us with a laugh for a year or so.