David Hayward recalls the cacophony of the print room 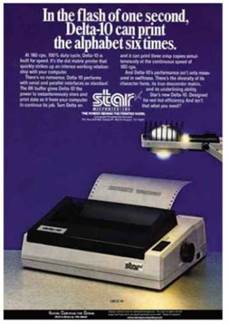 Back in the mid-nineties, I remember sitting in the IT Support office of a college when the Director of All Things (I can’t recall his exact title, sorry) burst through the door and demanded we set up in a separate room, away from his offices and placed in the furthermost corner of the building. The reason: dot matrix printers.

It wasn’t just one printer causing the poor bloke a headache – we had something like a dozen dot matrix printers of varying sizes, speeds and volume levels almost continually spitting out rainforest sized reams of tractor fed continuous paper. Admittedly, the resulting din was pretty spectacular; you had to shout to be able to be heard above it.

Thus, a print room was created and we bravely manhandled the hundredweight of printers down the corridor to their new home. That would have been the end of this tale, except for the fact that, amusingly, you could still hear the printers when stood outside and the block of flats next to the college made a collective complaint. The end result was the college being forced to buy nice new laser printers. A happy ending – for those with sensitive ears at least.

The first dot matrix printers appeared in the late sixties, but they weren’t commercially available until DEC (Digital Equipment Corporation) introduced the LA30 in 1979.

A few months later, Centronics launched the C101, which introduced the Parallel Interface (co-developed with Brother) that persisted until it was eventually replaced by USB many years later.

As time moved on, print quality and speed was greatly improved. The Epson MX-80 for example, was considered a milestone product and allowed both home and business users access to a cheap, but wonderful, workhorse printer. 1985 saw the release of the legendary Tandy DMP- 130, a printer so well thought-of that a popular rumour states there’s one installed in the President’s private nuclear bunker.

At 100cps, why not? After all it was popular in schools, colleges, universities and businesses well into the mid-nineties.

Eventually though, the dot matrix printers proved to be too expensive to maintain compared to mass produced, laser quality printers that were beginning to drop in price to the point where non­black ops military budget holders could buy one.

Thus it was that we said farewell to the dot matrix printer. A unit so impressive you could shelter behind it in confidence should the enemy ever drop a thousand pound bomb. You probably could have made roadblocks out of them.

They were pretty solid and, providing no one ham-fisted got to the controls, generally required very little attention. You didn’t need to replace paper all that often, either – a ream of twenty miles worth of continuous lasted a day or two, and the ribbons tended to go on for some time before fading to nothing. I once knew a chap who licked the ribbon to get a few more pages out of it. Crazy times indeed.

Should someone unqualified to open a tin of beans get their hands on the controls, then you were in for a rough day. The touchpad buttons rarely did what they advertised, and untangling the horrendous mess of a butchered ribbon was enough to drive the sanity from you very quickly.

What’s more cutting the feed’s perforated edges while the printer in use was a dangerous task. Fingertips were fast becoming an endangered species.

We were a patient bunch back then, imagine having to wait for a whole second!