Is that a clamshell in your pocket? Will Meister encounters a tiny, ARM-powered PC that revives a much-loved form factor. Read our Planet Gemini PDA Review.

Since April 2018, small, distinctive packages have been plopping onto the doormats of middle- aged IT professionals. Fourteen months after the launch of Planet Computers’ March 2017 Indiegogo campaign for a new personal digital assistant, production got under way at Planet’s Chinese supplier.

The review PDA showed up late in June 2018, but we’re not complaining. For a tiny startup to bring out a complex piece of hardware from concept to production in the time it would have taken Sharp or Asus to roll out an incremental improvement is an impressive achievement. However, while Planet might enjoy soaking up congratulations and applause from the old guard, the Gemini will need to win new fans if the company is to survive. How does it stack up as a smartphone… and as a Linux platform?

Have we met somewhere before? Planet’s Gemini PDA brings to mind the classic Psion Series 5.

The Gemini certainly makes a positive first impression. Like the illustrious Psion Series 5 (from 1997, I still have mine – Ed), it’s about the size of a child’s watercolour paint set, but with a hefty new brushed metal shell that suggests durability. There’s also an improved hinge design, which claws back real estate and hopefully obviates the Series 5’s display cable problems.

Like its predecessor, the Gemini’s proportions are determined by its keyboard. Its keys are just two-thirds the size of those on our office G80s, and arranged in a dense, non-standard layout that fills the entire lower half of the device. But they feel great, with

firm action and plenty of travel.

Booting the device via a long press on the ESC key, there was a little burst of vibration from inside the case – a nice touch. The 40-second startup was enlivened by a sun-and-planets animation, showing off every one of the two million pixels crammed into the six-inch screen. Like most premium touchscreens, the display is amply bright indoors but looks a little faded in sunlight, with a tendency to pick up smears.

If we were being really picky, we’d add that the in-built sound is anaemic by comparison with the average laptop, but let’s cut Planet some slack. After all, people aren’t buying this to be a portable boombox! The volume is good enough for casual Skype and YouTube, and you get a surprisingly widescreen experience by viewing a movie with a stereo soundtrack from a distance of a few inches.

After following a scripted setup that demonstrated the speed of the device’s Wi-Fi, we moved on to the phone functions. The supplied tool made it easy enough to prise off the upper part of the case and expose the microSD and SIM slots. Although the Gemini wouldn’t read the contacts file from an un-smart phone, it turned 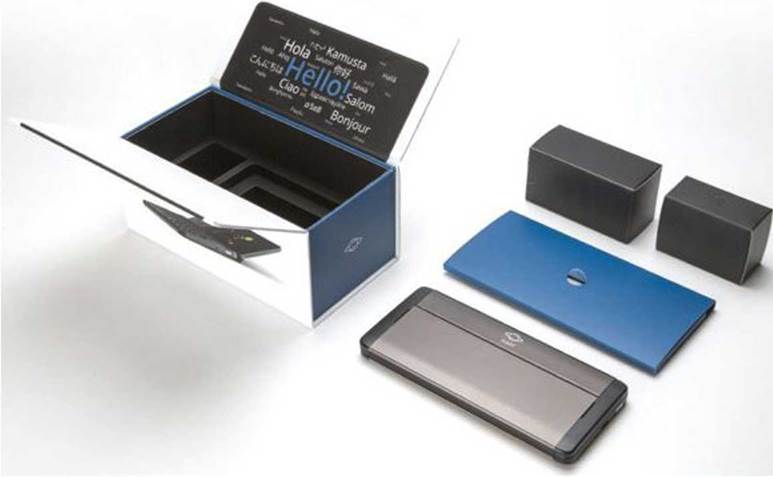 Jolla’s Sailfish is a mobile Linux with an impeccable pedigree. It’s a direct descendant of the Nokia/Intel MeeGo initiative with a number of interesting features, among them its use of Wayland display technology, and its facility with touchscreens. Sailfish and Gemini should be a match made in heaven. Jolla has both a core team of professional developers and an active user community. The Sailfish image, which is now available for download via Planet’s site, is a community remix that’s based on beta versions of Sailfish 3.0. Its functionality is impressive, but it makes a couple of significant omissions – not least the software layer that enables users of official releases to run Android apps alongside Linux software. We also had some problems with the third-party flashing tool that’s been made available by Planet. Jolla has promised that a full release of Sailfish 3.0 for Gemini will become available by the end of the year.

out to make a reasonable, if awkward, handset. Reception is good and, once you’ve figured out how to hold the speaker to your ear, the sound is acceptable.

It’s even possible to take an incoming call without opening the case, although dialling out requires access to the screen and keyboard.

Thus far, first impressions had proved accurate. There had been rumours of keyboard and port problems in the first production run, but the worst fault in our unit was a transient crackle via the headphone socket. The Gemini rivalled mid-range laptops for speed, delivered a full day’s work on one charge, and fitted into a pocket. Connectivity wasn’t ideal, but cramming two USB-C ports with charging and HDMI functions into such a tiny device must have been quite a challenge. In hardware terms, then, the Gemini looks like a worthy successor to the Series 5. But what about its software?

The device arrived with a complement of Android apps that included all the usual suspects, among them Chrome, Word and Skype. There was also a neat, user- configurable launcher that nodded to the old Psion app bar and a force-rotate app to engage the otherwise elusive portrait mode.

The apps worked well enough. Word for Android felt much better with a real keyboard, and Skype made impressive use of the front-facing camera. However, most of the apps failed to take full advantage of the Gemini’s wide-format screen. And while Android will make the device instantly familiar to, say, Galaxy Note owners, it may alienate the mini-clamshell fans who comprise its core market.

If so, their prejudice is understandable. Psion’s Apple-like preference for in-house development meant that the Series 5 and 7 had first-class software to go with their EPOC OS and unique screen layouts. Android is simply not great at the file management tasks that preoccupy keyboard-centric users.

Planet’s rejoinder is built right into the device. The Gemini’s hardware reflects all the lessons of a decade or so of open-sourcing, and the company has spoken of the role it expects the user community to play in the development of fully fledged Linux solutions.

Every Gemini shipped to date has been Android-powered. Planet had a Ubuntu port available when the first devices were released, along with installation utilities. However, this was a proof-of-concept vanilla OS that skipped GSM functions and worked best with a mouse. The intervening weeks have seen the emergence of an impressive community remix of Jolla’s SailfishOS, offering GSM telephony and touchscreen integration (see box, left). There’s also rumoured interest from developers of other distributions, including UBports, the community continuation of Ubuntu Touch.

While these are reasons to be cheerful, potential buyers need to be aware that neither Ubuntu nor Sailfish can yet handle all the Gemini’s resources. Dual-boot installation is the order of business, so Linux

experimenters should prepare for a session with an online partitioning tool, the configuration of a flash installer on a host PC, locating and downloading appropriate firmware. And some finger-crossing…

But this picture is changing weekly. So far, only a few thousand Geminis have rolled off that Chinese production line. If the user base continues to grow at the present rate, there’s every chance the Gemini will get the software that it deserves. 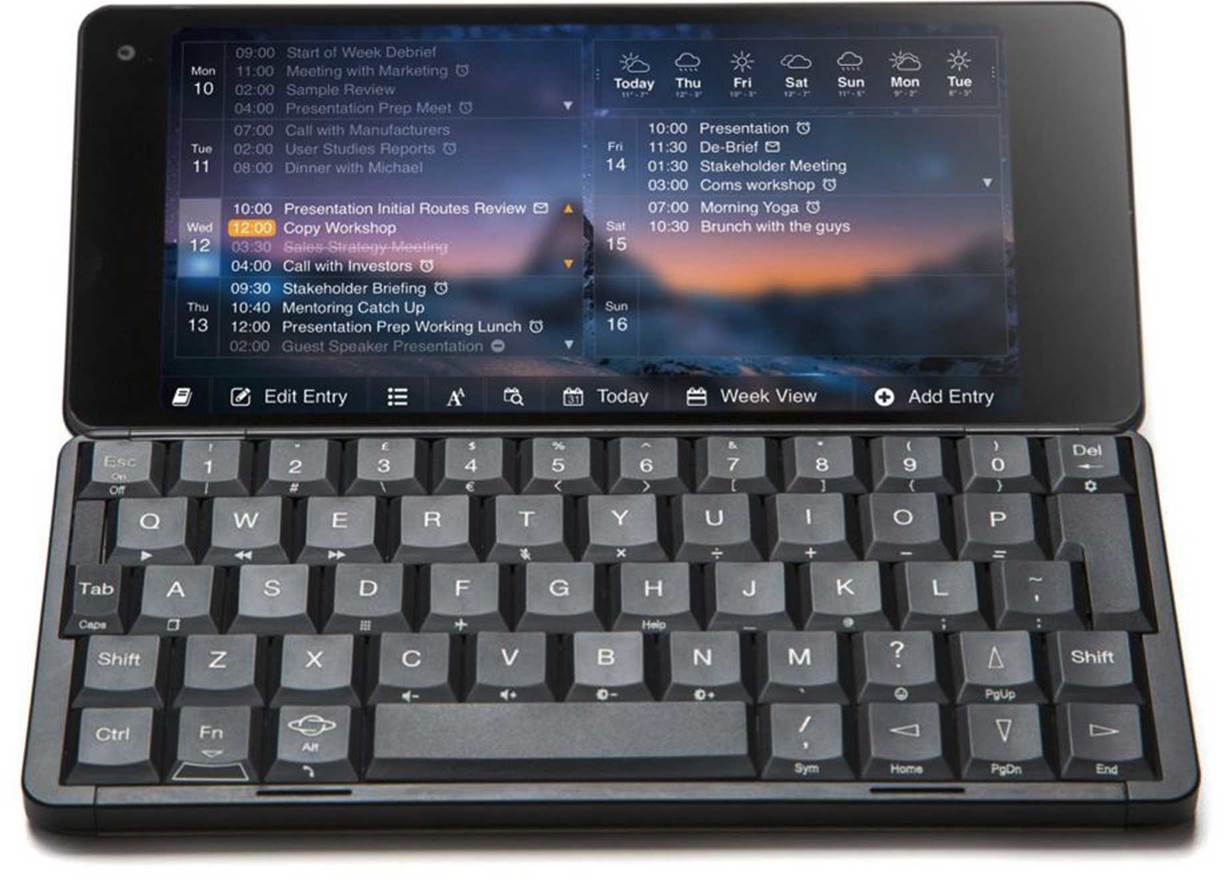 A key lure of the original Psion 5 was that tiny but functional keyboard. The Gemini has lost nothing on this front with a touch-typing capable keyboard.

For the price of a full laptop you get good hardware with the potential for greatness... if decent software becomes available.