Ever wished that what you scribbled on paper could magically be stored in your PC? The Rocketbook is the answer! Maybe. Read our Rocketbook Wave Executive Review.

You buy this comb-bound notebook and write or draw on its pages, which have a faint grid of squares pre-printed, using a Pilot Frixion ballpoint. Then digitise each page by taking a photo of it with your phone, and…

Wait, what? The nicely designed Rocketbook app does make this simple, automatically straightening up your snaps with the aid of those squares, but relies on decent light and a good-quality phone camera. It worked well with our Samsung Galaxy S7, but the squares were partially visible, as were some strange blue marks, maybe due to our Rocketbook getting damp. 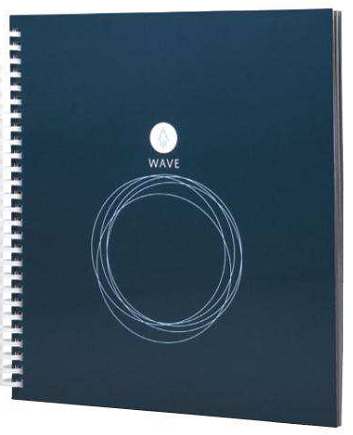 It may look like a normal notepad, but don’t use a normal Biro – the Rocketbook system only picks up Pilot’s Frixion pens

The software integrates with Dropbox, Google Drive, Evernote and Microsoft OneNote, or you can just email the scans to yourself. But that’s it. The app doesn’t do anything clever like converting your handwriting to a Word file (via OCR).

The unique selling point is that the Rocketbook is re-usable. That’s the Wave part. You put it in your microwave. Seriously. With a mug of water, so it doesn’t catch fire. And you cook it. Then when you open it, all the writing has disappeared (except any that you accidentally did in normal pen instead of Frixion). And even the Frixion writing doesn’t always totally vanish. And nor do

the indents you made in the paper. But anyway, you can do this up to five times. Which is just as well, because a normal notebook costs about five times less.

Now. to be fair. Rocketbook is much cheaper than actual electronic notebooks, like the Moleskine Smart Writing Set or Wacom’s Bamboo Slate, a digitising clipboard that works with single sheets of ordinary paper. But we’re struggling to see what it actually does. Just buy a normal notebook, and use one of the many mobile apps that straighten photos of documents (the next version of Apple’s iOS has this built in). 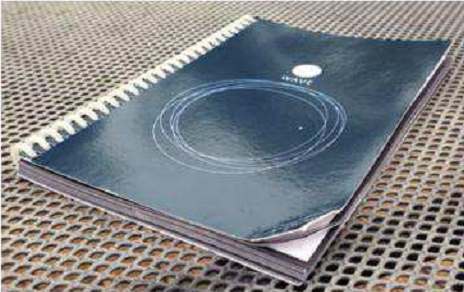 Our test Rocketbook looked tatty after a fortnight’s use

Even better, pop your page on the scanner on your multi-function printer. Don’t have one? You can buy one cheaper than a Rocketbook (such as the Canon Pixma).

Available in A5 or A4 sizes, this effortlessly transfers whatever you write or draw to your phone or tablet via Bluetooth