Netrunner Rolling 2018.01 review – There’s a seemingly endless list of Arch-based KDE distributions. Does this one manage to set itself apart from the others?

Netrunner is a product of Blue Systems, a German IT company which is one of the most prominent supporters of the KDE project and which employs quite a few core project developers. Netrunner has multiple KDE-centric versions. There’s the headline Desktop release, based on Debian. and this rolling release based on Manjaro Linux – one of the most popular distributions built atop Arch Linux. Given its close ties to KDE. Netrunner ensures its distributions offers the best KDE experience. 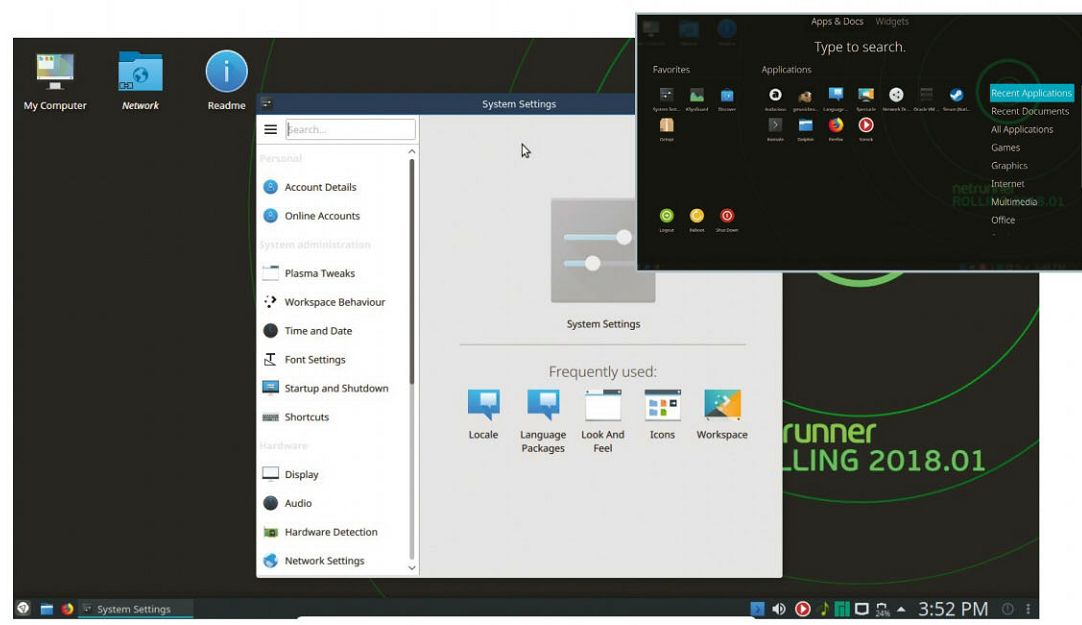 Netrunner Rolling doesn’t try to mask the fact that it’s based on Manjaro. For example, if you’ve used Manjaro you’ll notice Netrunner Rolling uses the same boot menu. The unique point of this boot menu is that it allows users to select whether they wish to boot the Live environment with either the free or proprietary drivers. The one very prominent aspect in which Netrunner Rolling distinguishes itself from Manjaro is its heavily customised Plasma desktop environment. The distribution has also worked on its usability by reorganising the various modules in the KDE System Settings manager. For example, a new section named Plasma Tweaks houses all the settings related to the look and feel of the KDE desktop and its various elements such as icons, window decoration and so on.

Unlike stock KDE desktops, the one in Netrunner Rolling doesn’t have the Folder View widget; instead, it’s completely blank aside from three icons. Command-line warriors will appreciate the inclusion of Yakuake, a utility that enables them to pull down a terminal window at any time with the F12 key.

The distribution has also done a wonderful job of integrating the items borrowed from the Manjaro Settings Manager into KDE System Settings.

Netrunner Rolling’s smart-looking desktop uses KDE’s full-screen Dashboard application launcher by default. The only issue with the launcher is incomplete labels for several menu items. In the absence of tooltips, this will not only confuse and irritate first-time users, but also looks very unprofessional. You can. however, switch to any of the three other included app launchers.

One strong suit of the distribution is its list of installed apps: Firefox Quantum 57. for instance, launches almost instantly thanks to a pre-load daemon. It’s also equipped with a couple of add-ons such as uBlock Origin for filtering content. Similarly, KDE’s default file manager Dolphin ships with several extra extensions enabled by default, including the ability to manage Git, SVN, Mercurial and Bazaar repositories.

There’s also a host of marquee KDE apps such as Kdenlive, Krita, KDE Marble and more. Surprisingly. Netrunner Rolling includes the mainstream LibreOffice instead of KDE’s almost-as-good Calligra Suite, perhaps because of the former’s improved usability. In the same vein, the distribution also rolls in a couple of proprietary apps. including Skype and the Steam installer.

To appeal to a wide variety of users. Netrunner Rolling includes a handful of niche apps such as vokoscreen for screencasting. Handbrake transcoder. GRUB Customiser and VirtualBox. Multimedia duties are handled by gmusicbrowser. Audacious, and SMPlayer. There’s also the Yarock music player, which is visually appealing and includes a bunch of online radio-streaming services.

For package management, the distribution includes Octopi. which is a front-end to Arch’s Pacman package manager, and also Plasma Discover, which is KDE’s app store. You can use either of the store apps to track and install updates, which is a nice touch.

Aesthetically pleasing desktop with a string of usability customisations and a wide range of apps.

Netrunner Rolling is an aesthetically pleasing distribution built atop a solid foundation. It makes good use of its base distro by nicely incorporating its key components. The distro does a good job of catering to a wide variety of users, from first-timers to experienced.

Netrunner Rolling is an aesthetically pleasing distribution built atop a solid foundation. It makes good use of its base distro by nicely incorporating its key components. The distro does a good job of catering to a wide variety of users, from first-timers to experienced.