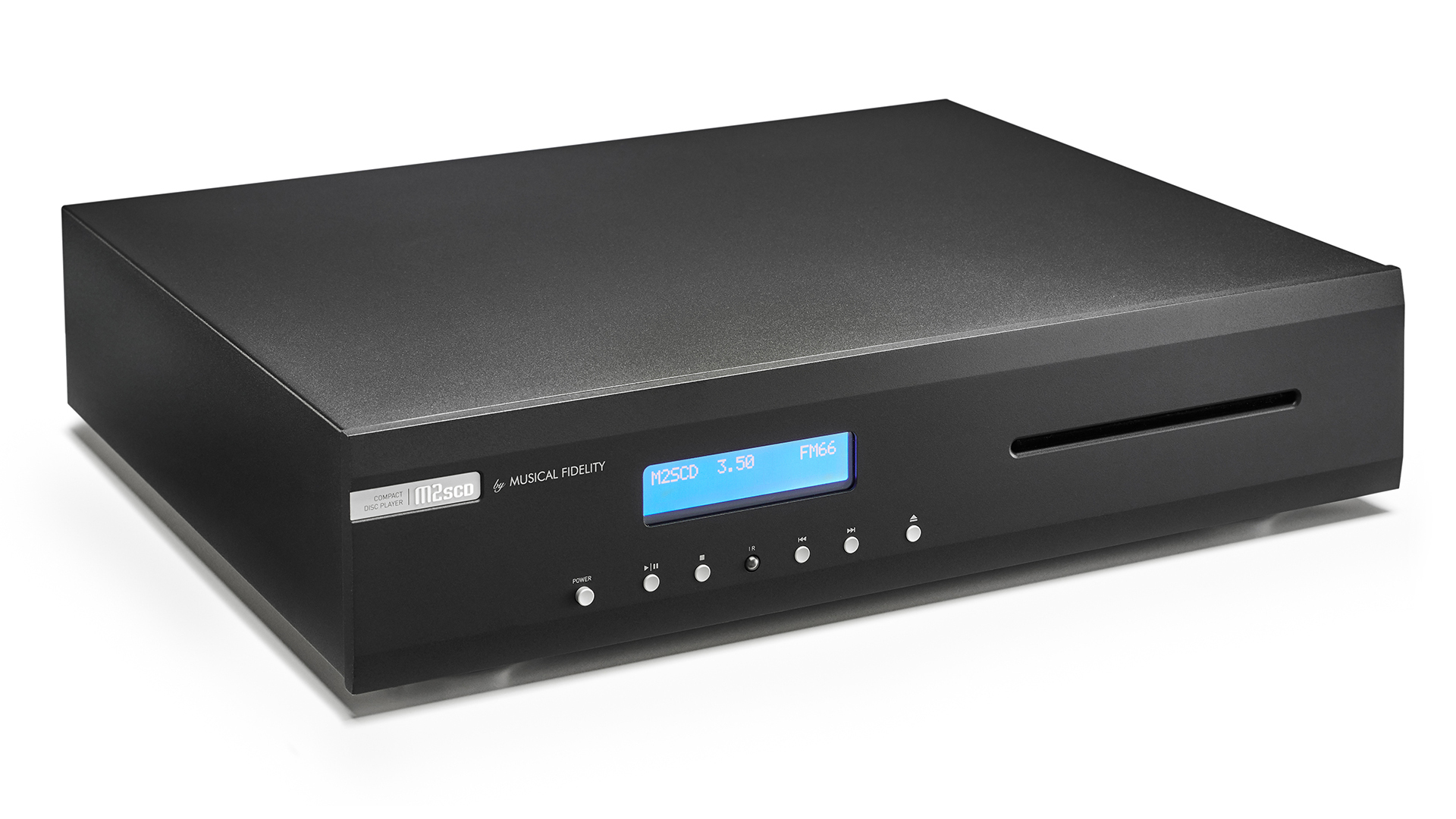 Musical Fidelity’s M2sCD CD player is a natural partner for the M2si stereo amp – the two-part M2 series marking the brand’s first release since being acquired by Pro-Ject Audio Systems.

The M2sCD is the firm’s most affordable CD player, sitting below the M3 and M6 models. The M6, which is positioned as a digital hub rather than just a CD player, will set you back well over three times the cost of the M2sCD.

Musical Fidelity has opted for a sleek, fuss-free design, with a small silver M2sCD insignia plate the only real flourish in terms of bodywork. Combined with the player’s dimensions, it reminds us of the opening mechanism of a quality briefcase.

There are small, silver, circular control buttons located in a line below the digital screen. This row of six is split by a centrally positioned IR receiver, which gets in the way somewhat and looks a little awkward, but the buttons feel precise and are pleasing to push. Otherwise, there’s little to dislike here in terms of aesthetics.

The bright blue display is reasonable, but viewing angles could be better. Unless you’re almost directly in front of it, the magnolia digital track information text fades away into the abyss. It can be turned off, with Musical Fidelity claiming this will minimise electrical noise and help improve the M2sCD’s performance.

The M2sCD boasts a mains choke filter alongside its more hi-tech digital stream noise filter. While the former is perhaps a less fashionable approach, Musical Fidelity uses it to clean up the power supply and give you a better sound.

There’s a 24-bit Delta-Sigma dual differential DAC onboard, and coaxial and optical digital outs as well as analogue RCA. There are no digital inputs: this is a sleek CD player with integrated DAC, nothing more, nothing less.

The M2sCD also comes with a neat remote control

We slip Prince and the New Power Generation’s Diamonds And Pearls into the M2sCD. It’s the same CD we’ve heard many times before, but this is something of a levelled up performance compared with players at around the £ mark, such as the Marantz CD6006 UK.

The separation and transparency of the vocal chorus at the start of Thunder is startling, accompanied by an agile, smooth bassline as the rhythm and guitar reverb kick in. This is Prince’s music as it should be: rhythmic, clear throughout the frequencies and musical, with each melodic strand and vocal lick held in check, yet given ample space to riff. The overall effect is impressive.

The album continues to Daddy Pop and, dynamically, it’s clear that we’re being treated to a fine rendition. The pensive, ambient sounds at the start of the title track are rounded and sparkling, perceptible right up until they give way to the bass, cymbal and keys. Prince’s vocal is central within a cohesive mix.

We dig out more challenging material to see what the Musical Fidelity is capable of and settle upon the digitally remastered version of Weather Report’s jazz/rock masterpiece, Heavy Weather.

The M2sCD finds an extra ounce of detail and flick of musical flair at every turn, even as the instrumental layers build to a cacophony during Birdland. If you can listen to this player and not tap your toes, you’ve more reserve than us.

The soaring saxophone solo in A Remark You Made is three-dimensional and emotive. It’s as sombre as the musician doubtless intended, but never gets muddied by its electric bass counterpart, even when both instruments play the same melody.

We listen to Radiohead’s OK Computer and the M2sCD continues to provide a refined, musical listen. But here, the jagged bassline at the start of Airbag feels marginally smoother and less disconcerting than it should do. Indeed, the track could also have a slightly harder edge through the guitar.

We load the CD into the Cyrus CDi and we hear that extra bite. Although the CDi involves a steep hike in price, it’s a small mark against the Musical Fidelity.

The M2sCD presents a refined, enjoyable listen and for those who like a smooth, musical and elegant sound, it’s a fine proposition – beating less expensive models for both breadth and clarity.

This player is cleverly positioned between fine budget performers, such as Marantz’s CD6006 UK, and more premium offerings, including the Cyrus CDi and Quad Artera Play+. There’s little competition at this price, which makes it an excellent buy.

This is a detailed and delicately layered CD player, and a very listenable proposition too