The X40 does almost everything you could want – and more – and claims audiophile credibility too. James Parker explores

Most people thinking of committing their music collection to some kind of digital storage solution have a wish list in mind. They’d like an all-in-one unit able to rip, store and play their CDs; or something able to access internet radio and lossless streaming services such as Qobuz; or perhaps a means of ripping their LP collection to hard disk for playback.

Maybe they want to record from the radio, be it internet-streamed or FM; or have a unit holding music able to be accessed by other players around the house; or even something to store and play not only hi-res PCM-based music but also DSD.If you’ve been sitting reading that and ticking off the things you’d like to have, then you’re not alone. Happily, the people at Novafidelity, and its sibling brand Cocktail Audio, like the way you think, mainly because they clearly think the same way. All the functions previously mentioned – and quite a few more – are loaded aboard the Novafidelity X40, its latest player. Er, recorder. Umm, server – well, you get the idea.Of course, the two brands aren’t any stranger to this kind of ‘everything you need plus a device for taking stones out of boy scouts’ hooves’ thinking: right from the entry-level Novafidelity X12, there’s a lot on offer, including CD ripping, playback and the ability to act as a standalone unit with just the addition of speakers, as a server for other network players or as a client for local music storage on a computer or a NAS device.Sitting at the top of the range, the Novafidelity X40 takes the design of the Cocktail Audio X30, and then adds some more bells and whistles onto that machine’s already impressive array of things you can ring or blow.Yes, the X40 is rather more expensive than the X30 – in the base ‘add your own hard drive’ specification, but at first glance it appears to offer less than the more affordable model, as the X30’s built-in 50W per channel Class D amplification has gone overboard in the process of creating the new model, so the X40 needs to be used as a conventional source component into an amp.

However, the gains outweigh the losses, as the X40 has added the ESS Sabre32 Reference DSD/DXD digital-to-analogue conversion solution: whereas the X30’s Burr-Brown PCM1792a DAC tops out at 24-bit/192kHz, this one can handle both DSD64/2.8MHz and DSD128/5.6MHz content as well as DXD up to 24-bit/352.8kHz and PCM at up to 32-bit/384kHz, and do so in native form, not by jiggery pokering the content down in resolution.

It’s all under the control of a hunkier Digital Signal Processor, in place of the 700MHz CPU used in the cooking model, while there’s also a toroidal transformer to keep things quieter under the hood, and a more substantial chassis and case, complete with a 12mm aluminium front panel to improve rigidity and resistance to mechanical and electrical interference.Also new is a moving magnet phono input: the X30 could perform the trick of recording from its built-in FM and internet radio tuners (complete with timer recording from internet radio streams), as well as accepting line and digital inputs and ripping CDs, but the X40 can also have a turntable plugged straight in to allow digitising of vinyl at up to 24-bit/192kHz.Completing the package is a choice of analogue outputs: to reinforce its serious intent, the X40 comes complete with balanced XLRs as well as the regular RCA phono socket outputs, and both sets can be used at either fixed level – for use into a regular amplifier – or variable for direct connection to a power amplifier or active speakers.So what else can it do? Well, it offers a choice of wired or wireless networking, the latter using an optional ‘dongle’ (and it fits in one of the USB sockets on the rear panel), though I’d probably stick with the former if shunting a lot of hi-res files around.As already mentioned, it can be had in a range of hard-drive capacities up to 4TB, using 2.5in or 3.5in drives, and either conventional hard-drive or solid-state storage for faster access. To give you some idea of how the whole pricing model works, the 2TB model supplied for review is £ more than the ‘bare-bones, fit your own drive’ version, one with 4TB installed is another £, and the top-end model with a 1TB SSD.

It’s your call, really: fitting a drive into the X40 is no harder than changing the storage in a NAS drive, in that you undo a couple of bolts, slide out the drive tray, fix the drive in place with four screws, and then stick the tray back in place. The only thing likely to take a bit of time is the process of formatting the drive.Well, that and loading the X40 with some music might also hold you up a bit, especially if you try to copy an entire 128GB USB stick to the hard drive as I do before I start listening. Ripping CDs is rather speedier – and of course you can choose whether or not to store them at ‘full-fat’, something more phone/personal player-friendly, and at what bitrate/speed you want to rip them at. The default is ‘very fast’, which runs at about 3x speed, while choosing the slowest ‘excellent’ setting will take 50 percent longer than the running time of the disc.Fortunately adding music to the X40 incrementally isn’t a chore, whether from disc or ‘stick’, and a library can be built up quickly and easily.I use the X40 both into the new Cambridge CXA80 amplifier and my usual Naim Supernait 2, and as a server for my usual network players and a client for my QNAPs NAS units, and while it’s clearly slicker running music from its own hard drive storage, thanks to a reasonable browser-based interface usable on computers, tablets and smartphones, it also performs the server and client functions well. It can even be run directly from the handset supplied, once you’ve found your way round the myriad buttons, not least due to the big, clear 5in TFT display on the front panel. 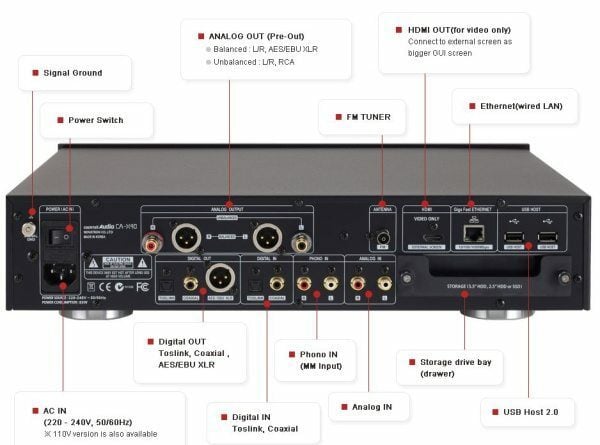 The sound of the X40 is instantly appealing: whether on internet radio stations or with hi-res music all the way up to DSD, it has no shortage of punch and drive, coupled with fine insight into the detail of a recording.It makes the most of the extra quality available in DSD, DXD and hi-res PCM files, thanks to substantial bass as adept when crashing out the rhythm section of The Who in full flight as it is with grumbly synth-bass lines or the weight of a full symphony orchestra. What’s more, it’s not just that there’s a lot of bass on offer: the speed and definition down in the lower registers is equally impressive, whether with lightning-fast electric bass or the rosiny growl of an upright instrument. It’s a sound seemingly designed to encourage you to turn the system up and enjoy the clout on offer. And when you do so the reward is truly thrilling power and slam, more than up to the standard of a very good CD player.Things get even better when you load up a DSD file and revel in the big, organic-sounding low-end higher resolution recordings can deliver, while at the same time giving you all that sense of space and character that’s so much a part of the appeal of hi-res played on good equipment.Play some tight small-group jazz, and the X40 reveals its ability to shimmer out cymbals and present piano with full weight. Step things up to the current Blur set, and its speed and ability to drive rhythms cleanly ensures the music holds the attention and rewards close listening.By any standards, what this fiendishly capable unit can do is remarkable: all that flexibility has been achieved without any compromise in sound quality, as soon becomes clear whether playing solo classical instruments or high-octane rock recordings. If the material you load onto the X40, and the rest of your system, are up to the task, this is a recorder/player fully able to deliver all that a recording has to give, and do so with no more than a twist and a push of the main control.Yes, you’re going to have to spend some time with it to do any more than scratch the surface of the wide-ranging competence here – by the way, it makes very good rips from LP (and is of sufficient quality to mean you’d better be using it with a pretty good turntable, not one of those plasticky budget buys) – but this is one of those components that rewards with extended use.Just when you think you’ve got it all, chances are you’re going to find something else it does – and does very well indeed.

Novafidelity has added winning sound to its already amazing flexibility.?

£699.00
Added to wishlistRemoved from wishlist 1