MSI Z370 SLI Plus review – We’re still waiting for Intel to release Coffee Lake chipsets other than the expensive Z370 model, not least so that its non-K-series CPUs can offer better value once you factor in the motherboard price. It seems we’ll have to wait a bit longer in order to pick up boards that aren’t geared towards overclocking, but MSI has managed to squeeze quite a few features into its Z370 SLI Plus. 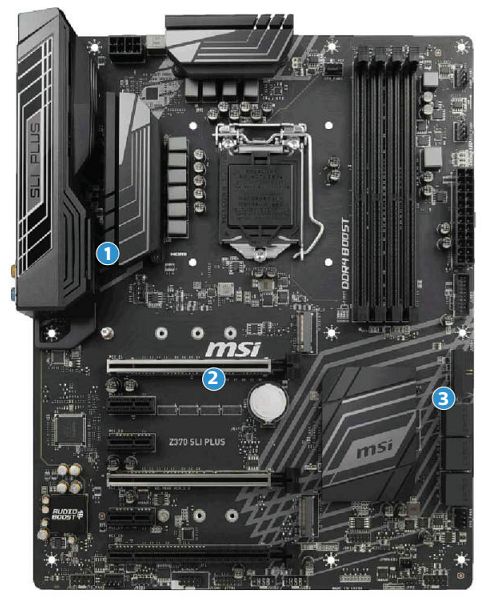 Compared with the likes of Asus’ Z370 Strix ATX boards, it’s a comparative bargain, and it looks great with a black PCB and heatsinks mixed with splashes of silver.

Despite its name, the board supports AMD CrossFire as well as Nvidia’s SLI multi-GPU technology, and MSI includes its usual great EFI, so you get superb fan control, with the ability to change the temperature source to an area other than the CPU for system fans. The dedicated water pump header offers 24W of power, so it could be used to control many DIY water-cooling pumps, as well as all-in-one liquid coolers, and there’s a handy total of six 4-pin fan headers too.

Obvious budget-cutting omissions on the PCB are a complete lack of overclocking and testing tools, as well as M.2 heatsinks, but there are two M.2 slots, both of which support either PCI-E or SATA M.2 SSDs. Thankfully, the cuts haven’t been too deep elsewhere, as you get some hefty CPU power circuitry heatsinks and an attractive I/O panel shroud, which looks a lot better than the bunch of exposed ports you normally see on boards at this price. MSI hasn’t skimped on the audio either, as you get Realtek’s latest ALC1220 audio codec rather than an older, lower- performing 800-series codec.

There’s no USB 3.1 header, as you might expect on boards approaching £200, but MSI does include both Type-A and Type-C USB 3.1 ports, courtesy of an ASMedia 2142 controller.

The rear I/O panel sports a further four USB 3 ports and two USB 2 ports, which should be enough for most people, as are the six Intel Z370-controlled SATA 6Gbps ports, all of which are mounted parallel to the PCB.

Meanwhile, the two primary 16x PCI-E slots are steel-reinforced, which not only looks great, but reduces the chance of them shearing when you move your PC.

MSI hasn’t skimped on the audio either, as you get Realtek’s latest ALC1220 codec

You might think RGB lighting would be beyond a board at this price too, but there are LEDs on the rear of each corner of the PCB and PCH heatsink, which offer a subtle glow that’s customisable in MSI’s Mystic Light software. You also get the usual 4-pin RGB LED strip header should you wish to attach your own lighting, plus an extension cable in the box.

Overall, the layout is practically faultless; you’ll be able to access at least one of the M.2 ports and the lower PCI-E slot even if you opt for a two-way GPU setup, and the latter will benefit from double-spaced 16x PCI-E slots, allowing the top card to breathe, if it’s air-cooled, of course. Our only qualm is that there’s only one fan header within easy reach of the CPU socket, so if you want to power two fans or a pump, you’ll need to stretch the cable past the DIMM slots, or to a header south of the larger power circuitry heatsink.

The Z370 SLI Plus fared well at stock speed, matching the rest of the field with a system score of 186,504, and never straying far from the best Z370 results we’ve seen. Overclocking was also simple thanks to the excellent, clear EFI, which requires less flitting between pages than Gigabyte’s current EFI. Our Core i7-8700K required a vcore of 1.28V to hit 5GHz, which is a little high considering the Asus Maximus X Hero only needed 1.25V with the same CPU, but the thermal demands were still within reach of the all-in-one liquid cooler we used for testing.

This overclock saw the system score rise by 11 per cent while Ashes of the Singularity: Escalation saw 2fps added to the minimum frame rate. The Realtek audio was on the

2 The two primary 16xPCI-E slots are steel-reinforced, reducing the chance of them shearing

money too. with the dynamic range of 111.3dBA sitting between the lowest and highest results we’ve seen from other ALC1220 codec results. The M.2 speed was excellent too. managing read and write speeds of 3,398MB/sec and 1,857MB/sec respectively, despite the lack of heatsinks for our Samsung 960 Evo SSD.

The MSI Z370 SLI Plus offers excellent value for money for a Z370 motherboard already, but it offers many high-end features and solid performance in our benchmarks that mean it’s still competitive with considerably more expensive boards. It also managed to overclock our Coffee Lake CPU as far as other Z370 boards we’ve tested, with just a little more voltage than the average amount plus it looks great as well.

We’d still suggest waiting for cheaper motherboards based on chipsets other than Z370 if you have a non-K- series Coffee Lake CPU. as you’ll likely save a few more notes, but the Z370 SLI Plus is the perfect match for the likes of the Core i3-8350K, while still looking good and offering more than just the essentials.

A great budget-conscious Z370 board that still offers premium features, a good layout and solid overclocking.