Asus TUF Z370-PRO Gaming – Oh, how the mighty have fallen

Oh, asus, what have you done to our beloved TUF? A brand synonymous with endurance, world firsts, the introduction of dust protection, impeccable cooling, incredible overclocking stability, and a neutral color palette, capable of appeasing even the most accent-phobic of system builders, has been reduced to a budget, entry-level board, daubed with yellow construction- site paint. 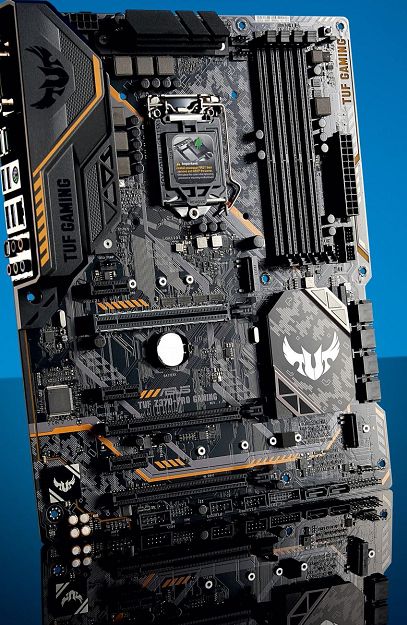 We’re only telling you this because we love you.

As you can probably tell, we were quite fond of TUF. It has powered personal rigs and test benches, and has been a brand that we at Maximum PC have always turned to whenever we’ve needed to construct a no-fuss, get-the-job-done system for any and all. So, when we spotted these new motherboards on the horizon, well, we wept a little on the inside.

Now, let’s get this straight: We re not bemoaning the fact that the aesthetics have changed. Although it is a factor, it’s not the only reason we’re disappointed with where Asus has decided this brand should go. It makes sense, sort of. ROG is there for the gamers, while the WS series is available for professionals with a limitless budget, and the Prime series is aimed at everyone else. So, where does TUF fit into the market? It’s arguably a brand that should merge the very best of the WS lineup with that of ROG, with an emphasis on endurance and cooling. OK, so it’s not a huge deviation, and traditionally we’ve always railed against cheapjack rebrands of the same board for more dollar—but this? This is just cruel.

Don’t believe us? Then let’s bust out the comparison list. So, compared to the previous generation, first and foremost, there’s no longer any dust-protecting armor. Secondly, there’s no reinforced backplate. Thirdly, there’s no USB C rear I/O. Number four: no PCIe SSD covers (or any covers, for that matter). Five: the addition (it’s staggering this) of two vertical facing SATA ports. Six: DVI-I out instead of better substantiated I/O. And lastly, the loss of seven PWM fan headers—seven!

Anywho, enough with the railing- let’s get back to what matters. And that is, of course, performance. Overall, the Z370-PRO Gaming is a fairly solid all-around board; it performs in a very similar manner to the Maximus X Hero we tested not so long ago, with comparable scores in Cinebench R15, Fry Render, and X265. Latency is slightly improved, thanks to the more modern BIOS, and sequentials seem up as well. On the whole, overclocking was also pretty similar—we didn’t encounter much in the way of issues when it came to hitting our 5GHz target. Unfortunately, Asus is still plagued by those ramped-up stock voltages, and it’s quite commonplace to see temperatures reach 70 C under load at stock, even with a 280mm cooler, with the trade-off being the additional 10 percent performance.

By all accounts, ignoring its heritage, it is a solid and dependable board in today’s market. It’s a touch pricier than we’d like, but that aside, it performs just as well as boards twice the price, and we’ve got to give it credit for that. We just wish there was a premium TUF option out there, at the usual pricing, as opposed to this cut-down, basic version we’ve been given. If you’re after a budget overclocker, and don’t mind the garish yellow paint job and overvolting CPU VCore, though, this fits the bill nicely. -zak storey

HONOR THE WHAT? Poor rear I/O; degradation of a brand; lack of cooling; no premium option; overvolts CPU; nothing to make it unique; color scheme.