I was just about to shoot myself after watching Full Metal Jacket and having to do yet another motherboard review of a product that is just like every other board until this sucker came along. It’s substantially more expensive than the competition, so I expected to see some major innovations or new features. I’m not so sure I ended up seeing what I wanted. 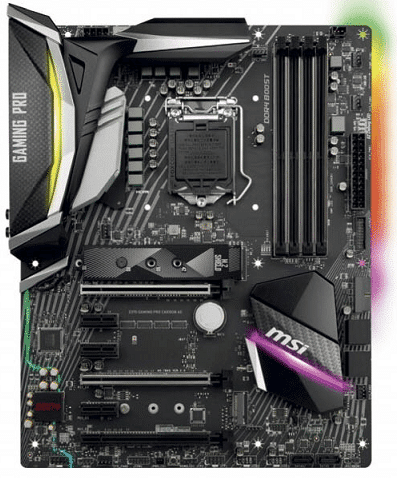 Like Gigabyte’s Aorus brand, MSI’s boards are all about the RGB. If you want your gaming room to look like a laser testing facility, this is the board for you. Mystic’s version of RGB is called ‘Mystic Lighting’, and it does up to 16.8 million colors…. Like every single other board on the market using RGB lights. Like the Gigabyte Aorus board, it’s compatible with most third party RGB solutions.

One thing instantly noticeable is how much denser and more coverage the power phase and southern heat-sinks are. It’s night and day compared to the other boards, which suggests this product will handle higher heat more ably, which equals higher overclocks. Speaking of which, this board doesn’t have MSI’s OC wheel, nor does it have any onboard buttons for rebooting, powering up, etc. When cheaper boards have this, it’s a strange omission.

Yet again we see this being a standard ATX board, this time with three full length x16 physical lanes (two steel reinforced) and three x1 physical lanes. Yep, identical to the others basically. There are two full speed PCIe 3.0 x4 M.2 slots, one of which comes with a nice chunky heatshield (this is the slot closest the main PCIe x16 slot for your GPU, so it makes sense to keep things chillin’). There are six SATA 3 ports, but oddly two of them are front facing, rather than along the side like the other ports. 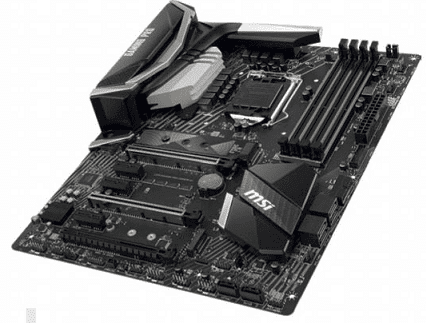 The four memory slots are rated to handle a maximum speed of 4000MHz, 300MHz less than other boards, though we think they’ll all hit around the same speed when tweaked properly. There’s just a single Ethernet port, but this is the only board to include integrated 802.11ac Wi-Fi. Is that really worth the extra though?

You can guess which audio codec this board is using already – the ALC1220 used by every other board in the roundup. Yep, it’s been beefed up, but this time is called ‘Audio Boost 4’.

It sounds just the same as the others, with one exception. The inclusion of Nahimic 2+ software definitely gives it a better virtual surround sound experience than the other boards.

if you want your gaming room to look like a laser testing facility, this is the board for you

Other than that though, this board seems pretty much identical to the others with the addition of Wi-Fi and removal of several SATA and M.2 ports. It does feel physically built better than the others, but not to the point we’d spend more.

Even when you jump the price, it’s still hard to make a difference, and MSI hasn’t done enough here to justify the leap.

Even when you jump the price, it's still hard to make a difference, and MSI hasn't done enough here to justify the leap.