MSI Raider GE63 8RF Review: Is MSI’s all-rounder a lemon or a Lambo?

MSI Raider GE63 8RF Review – MSI makes a bewildering array of gaming laptops. They come in all shapes and sizes from big, noisy and fast, to thin, light and portable. The Raider GR63 seeks to be an all-rounder – a gaming notebook that remains portable and sober enough to use for work. 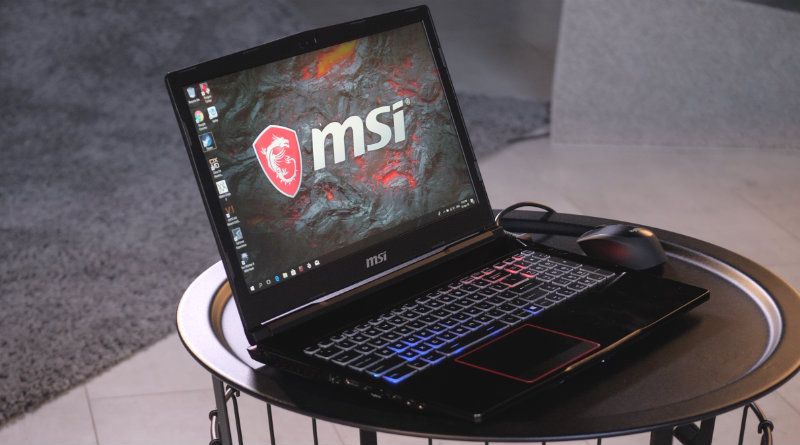 While MSI might not be the coolest moniker, its dragon badge makes amends. Cooler still are the pulsating, glowing streaks on the lid, which impressed everyone who saw them.

It’s also well-built with a solid chassis and a screen which hardly flexes. The 15.6-inch Full HD screen is matte and reflection-proof. It gets very bright but it’s not as crisp or uniformly-lit as rivals. It’s no deal breaker but text on a white background can show discolouration, especially when scrolling. Viewing angles are mediocre. However, the 120Hz refresh rate makes gaming smoother.

But that’s it for criticism. MSI’s SteelSeries RGB keyboard is a joy to use both for gaming and typing. There’s a full complement of keys (including a number pad and full-sized arrow keys) and they’re well laid out The trackpad is feels good and responsive. There’s a useful Dragon Center shortcut button and a max-fan button. The latter is important.

MSI’s many models mean it’s created a plethora of cooling systems and, in this type of laptop, cooling is a big deal as performance drops considerably when things get too hot. It’s so reliable that we consistently achieved seven per cent speed boosts when ramping-up the overclocking settings. While this isn’t much, competitors regularly run significantly slower due to overheating when overclocked. Be aware though, that at max power, these fans get very loud. You can throttle them though.

But what of the performance? This Raider uses Intel’s new Coffee Lake, hexa- core, Core i7-8750H processor which has a stock speed of 2.2GHz but all cores can Turbo Boost to 3.9GHz (one can push to 4.1GHz). This, along with 16GB RAM plus a 256GB NVMe SSD hard disk, make it fly along for all 2D tasks. There’s also a 1TB mechanical drive for storage.

For gaming there’s Nvidia GTX 1070 graphics. This never dropped beneath 30fps in any of our game benchmarks while its Fire Strike score was higher than more-powerful rivals, likely due to its cooling capabilities. To test that further, we left it cryptomining and the GPU only hit 74°C – rivals can push 90°C.

Battery life varied considerably depending on cooling profile but it still ran the PCMark test for two-and-a-quarter hours (albeit 25 per cent slower than when plugged in). It played our Full HD MM The balance of price, performance, and usability make it our favourite all- rounder notebook… MM movie for four hours. Portability is fair at 2.5KG but there’s a hefty power brick to lug around.

Connectivity is good thanks to USB-C, USB-A, Gigabit Ethernet, HDMI, mini- DisplayPort, an SD-card reader and two audio jacks. An HD webcam sits above the screen. The speakers are particularly praiseworthy due to their loudness and full-bodied audio.

The balance of price, performance, and usability makes it our favourite all-rounder notebook on the market.

Fast, looks-great, a joy to use and good value. What’s not to love?

Fast, looks-great, a joy to use and good value. What's not to love?