MSI B350i Pro AC Review – An ITX Ryzen mobo, with a fantastic overclocking solution, and a kick-ass feature set, all on the B350 chipset. Wait, what? The understated brown PCB, the sub-high- end chipset, the simple, unsophisticated black heatsinks — it all mars an otherwise fantastic assembly of prime components designed to push the Ryzen ITX form factor to new heights. 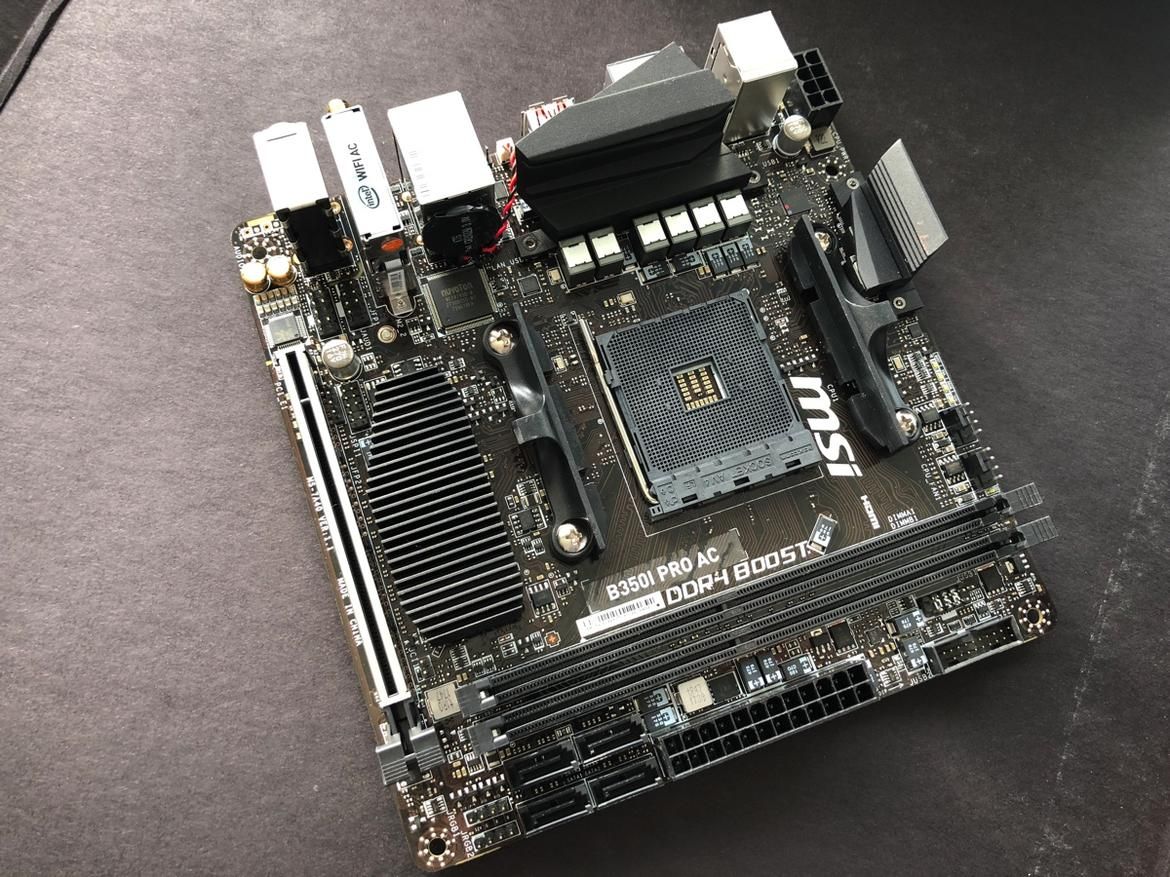 What’s so good about the B350i Pro AC? It all comes down to the power-phase design. There are nine phases in total here (with the closest competing ITX board housing a meager six in contrast), which helps provide the additional grunt needed to balance the power from a Ryzen core. At stock, the MSI B350i Pro topped our X26S, Cinebench R15 Multi, Fry Render and AIDA64 memory latency scores across every first-gen Ryzen board we’ve tested by quite a margin. So much so, in fact, that we had to double-check our testing methodologies to make sure nothing was awry.

We’ve never seen anything like it. Generally, when you get these kind of scores in motherboard testing, the dead giveaway about what’s going on is shown in the power draw figures. And, sure enough, peak draw testing puts the B350i Pro second highest, behind the Gigabyte AX370-Gaming 5, drawing a hefty 172W from the wall, compared to the AX370’s 197W. There’s not a huge difference between this and the other ‘boards below it (about 4W at most), but it’s enough to identify what’s causing these higher figures at stock. And that’s the stock Turbo performance.

Traditionally, Turbo clocks only kick in when a processor is under load. It’s a smart way of saving power when the core’s workload is non-existent. Under load, the processor ramps up the core frequency across all of its cores to the max safe operating parameters.

With Ryzen, AMD introduced a new form of Turbo tech known as XFR. Depending on the task at hand, and if temperatures are within the boundaries, it auto-overclocks and pushes as many cores as is needed to a higher frequency for better performance. So, you can get one core at 4.05GHz in demanding single- threaded applications, or eight cores at 3.9GHz in more challenging multithreaded programs.

So if a mobo provides scores meaningfully higher than its competitors in our testing suite, it almost certainly means power draw is up (and it is, in this case), implying the ‘board is leveraging temperatures and overclocks better than most. More often than not, because of that increased voltage, temps increase as well. But MSI has balanced this just right, to get more performance out of the processor without increasing temps much, with our tests reading around 65°C under load.

Unfortunately, all this VRM wizardry still doesn’t translate to a higher maximum overclock (as the architecture is still fairly maxed out as it is), but it does mean that the B350i Pro is a fantastic, almost budget, ITX offering for those looking to get the most out of any Ryzen CPU without tinkering. Power draw is higher than we’d like to see, but not enough to worry us, as those temps are still within reasonable parameters. Connectivity is solid, too. There’s nothing not to like about the B350i Pro, except perhaps the brown PCB.