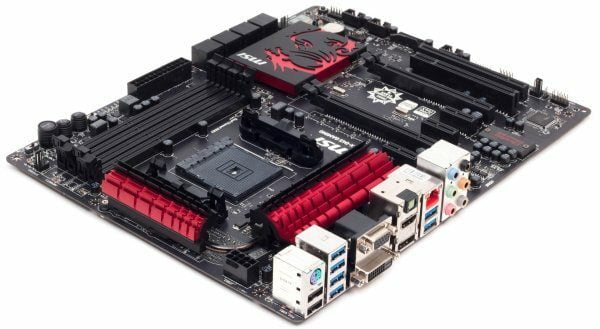 One of the main benefits of an APU system is its potentially small size, so full-sized ATX Socket FM2+ motherboards such as MSI‘s A88X-G45 Gaming often seem like a bit of a contradiction. However, there’s a few reasons to consider this particular board. Firstly, it has some of the best power circuitry cooling of any Socket FM2+ motherboard we’ve seen, which is important if you’re thinking of overclocking.

There’s also not one but three 16x PCI-E slots that support three-way CrossFire, although the third slot is limited to 4x speed. Sensibly, there’s also a large gap between the two top 16x PCI-E slots for airflow, plus a single PCI slot and trio of 1x PCI-E slots, one of which sits above the main 16x slot so it should always be accessible. That said, if you’re building a system with two or more graphics cards, you’re unlikely to do it with an API) system.Of course, you can also pair AMD’s APUs with discrete graphics cards in dual graphics mode, using the on-board CPU and discrete CPU together. However, the fastest model that’s compatible with this feature is the R7 250X, so sadly you can’t pair an A10-7870K with an R9 270X for a free performance boost.The PCB is peppered with useful tools and features too, such as five fan headers, power, reset and clear-CMOS buttons as well as an LED POST code display. The larger PCB has also enabled MSI to beef up the on-board audio, with an isolated area of the PCB dedicated to the audio processor, and a headphone amplifier thrown in too. This setup partners with the included Creative Sound Blaster Cinema software, which adds features with which owners of Creative sound cards will be familiar, such as Creative’s Crystalizer and Smart Volume.There are eight SATA 6Gbps ports too – more than you’ll find on any AMD mini-ITX motherboard, although there are no other SATA or PCI-E storage options. The SATA ports are all mounted parallel to the PCB, though, for easier cable routing and the layout in general is excellent. There’s plenty of room around the CPU socket, despite the large heatsinks, and MSI has made the most of the extra PCB real estate compared with a similarly priced Intel Z97 motherboard.There’s no on-board Wi-Fi, but you do get Killer E2205 Gigabit Ethernet. The rear panel also has the full array of video outputs, so if you’re planning on using an APU now to save money, but plan to drop in a discrete GPU at later, the A88X-G45 Gaming should work with any monitor. The DVI port will work with 2,560 x 1,600 monitors and while any APU-based system would struggle at 4K in games, the Display Port output can certainly handle a 4K monitor.There are plenty of USB 3 ports available too. The rear I/O panel offers two ports via the A88X chipset, with a further two via a motherboard header, while a separate VIA VL805 controller ads a further four ports to the rear I/O panel. The USB 3 header is perhaps the only poorly placed object on the PCB; mounted at the bottom of the motherboard, it isn’t ideally placed if your case’s front panel cables are routed from the top.Whether your APU is overclocked or not, MSI’s EFI is excellent and is very similar to the EFI systems on its Intel motherboards. It’s easy to set the memory frequency correctly (crucial on an APU system), and its visual fan control suite provides a welcome flash of colour too.Using AMD’s new A10-7870K, the A88X-G45 produced a total system score of 58,106, with the system drawing 128W under full load from the wall and 38W at idle. We then set about overclocking the APU, which proved to be easier overall than with the Gigabyte F2A88XN-WiFi we used in this month’s APU feature – the A88X-G45 Gaming happily pushed our APU to 4.6GHz with no additional vcore required. Beyond this frequency, the temperature quickly made the chip throttle.However, overclocking the on-board Radeon GPU wasn’t quite so easy. The Gigabyte board enables you to alter the CPU frequency in 1MHz steps, but the A88X-G45 Gaming only lets you increase the CPU clock in increments, usually between 20 and 40MHz. This system wasn’t ideal for fine tuning, and we had to settle for a GPU clock of 918MHz, which is only one step up from the default 867MHz frequency, as the next increment of 975MHz proved too far.Even so, this overclock resulted in some welcome performance increases of nearly 3,000 points in the image editing test, close to 19,000 extra points in the video encoding test and nearly 9,000 points in the multi-tasking test, with the system score rising from 58,106 to 65,894. This did have the result of increasing power consumption to 180W under load, although at idle, the difference between stock and overclocked was just 2W.We’re still in two minds as to whether an ATX-sized Socket FM2+ motherboard is a worthwhile investment. After all, if you intend to use more than one discrete graphics card, Intel’s Core i5 and i7 Devil’s Canyon chips provide a much more powerful foundation and, unlike a Pentium G3258 system, you can’t upgrade the CPU in an FM2+ system to one from a more powerful family later.There’s a case for using the Socket FM2+ platform as a super-cheap entry into the PC gaming market, though, and the A88X-G45 Gaming offers plenty of upgrade potential from CrossFire to discrete sound cards and even PCI-E storage using the ample on-board slots. It might have niche appeal and inflexible integrated GPU overclocking, but the A88X-G45 Gaming ticks all the other boxes. ANTONY LEATHERThere’s a small but definite niche market for large AMD Socket FM2+ motherboards, and the A88X-G45 Gaming is a well-designed board that fits this niche well.Memory support 4 slots: max 16 GB DDR3 (up to 2400MHz)Expansion slots 3 x 16x PCI-E 3, 3 x 1x PCI-E, 1xPCISound Realtek ALC1150 8-channelNetworking Killer E2205 Gigabit LANOverclocking Base clock 90-129MHz, CPU multiplier 8-63x; max voltages, CPU +0.5V, RAM 1.8VPorts 8 x SATA 6Gbps (A88X), 8 x USB 2, 8 x USB 3, 1 x LAN, 6 x surround audio out line in, mic, optical S/PDIF out, 1 x HDMI, 1 x DisplayPort, 1 x DVI, 1 x VGA