Although it’s known mainly for making cases, mice, keyboards, power supplies and so on, the German company MS-Tech also makes a small selection of PC audio products too, including the LD1500.

The LD1500 is made up of four upright satellite speakers with 3” drivers of 5W each, with an additional horizontal center speaker. The sub is a large monolithic structure that dishes out 25W RMS through its 5.25″ driver, totaling 45W RMS across the range. There’s a remote with the set (one that includes batteries, thankfully), which is quite large and ‘retro’ looking, like something you’d expect to find in a car boot sale.

The design of the satellites is simple, square and functional, with a silver stripe partway down the front of the mesh. They could easily be considered as being dull looking, but that’s made up for with the tall silver and black sub, complete with many buttons for source, volume, power and so on, and a digital display that appears to only show random numbers at different intervals. 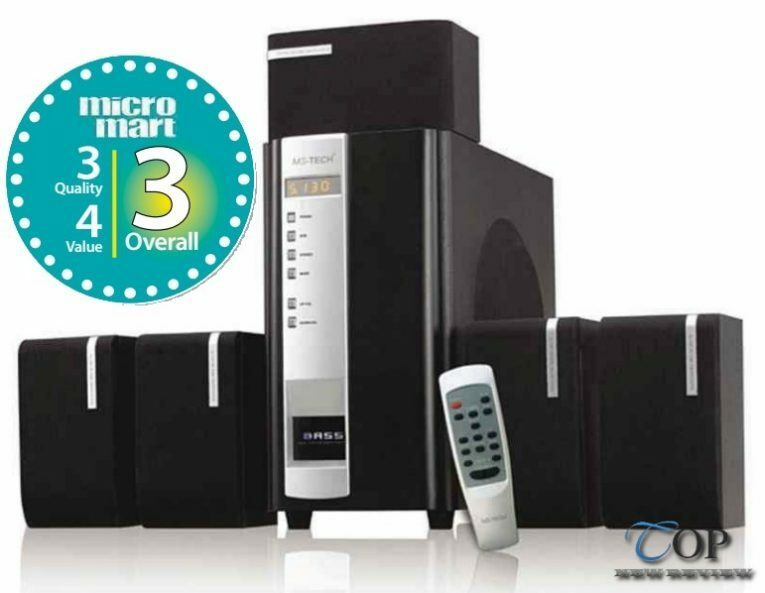 We can’t blame the designers for making it look like something from the 80s, but we can blame them for the abysmal sound quality that comes from both the sub and satellite speakers.

The sub was certainly problematic. We’ve never heard so much distortion and vibration from a sub before -even one we’ve intentionally turned right up to a window-pane-loosening level. It’s simply un-listenable and sets your teeth on edge.

The satellite speakers aren’t much better either. Their ear piercing shriek was close to making our ears bleed, and again the amount of distortion was simply terrible.

The movies, games and music we listened to were messed up beyond belief. And to add insult to injury, there were a shocking number of sound problems across the whole set, with missed audio sections and frequent popping as a speaker suddenly decided to lurch into action. Our Babymetal collection has never sounded so bad – and that’s saying something.

Surprisingly, the remote was excellent. In fact, it one of best wireless remotes in this group. It even worked when we were in a different room. It’s just a shame that MS-Tech couldn’t have applied that working technology to the rest of the system.

We have no idea how good the other products from MS-Tech are, but we have heard they’re rather good. We’re guessing, then, that It dropped the ball significantly with the LD1500 5.1 Sound System.

The average price for the LD1500, but to be honest, we’d recommend you steer well clear of this set.