Now, pay attention, class. The Surface Pro is Microsoft’s tablet. There’s the Surface Bookthat’s half tablet, half laptop. And now Microsoft is about to launch a new Surface Pro – marketed as ‘the most versatile laptop’, but it’s really a tablet. 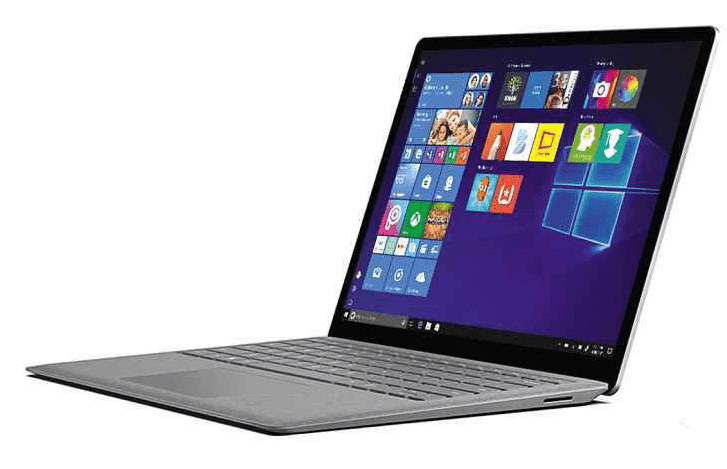 Meanwhile, here’s something completely different: the Surface Laptop. This one really is just a laptop. It has a full aluminium case, which feels sturdy despite being very thin and is spookily free of seams, screws or grilles. It’s also almost free of ports, which is not quite so welcome. The backlit grey tile-style keys are well spaced and move far enough when pressed, with a satisfying click, to ensure typing doesn’t feel mushy.

A big trackpad supports Windows 10’s gestures, but the Surface Laptop also comes as standard with a touchscreen.
This has 2256×1504 pixels, about 70 per cent more than Full HD, which is very sharp at 13.5in. Unfortunately, our tests found it covered just 77 per cent of the sRGB range, and colors looked muddy, washed-out and inaccurate. Despite high contrast and decent brightness, it’s not a good choice for photo or video editing.

Inside, even the base model has a capable Intel Kaby Lake i5 processor, although the meagre 4GB of memory will slow down more demanding apps and multitasking. We also tried a configuration with a more sensible 8GB and twice the storage, at 256GB, and it handled a variety of jobs with aplomb.

We couldn’t run our usual tests, though, because this is the first laptop to come with Windows 10 S, a new version of the operating system (OS) that’s locked down, meaning it allows only programs from the official Microsoft Store to be installed.

That’s a big step for PCs. For users who only need mainstream software, it helps avoid security concerns, which is not a bad thing. Others might need a more flexible edition of Windows, and you’re not prevented from installing whatever OS you want, but you’d have to buy it separately. To test the water, Microsoft is offering a free upgrade to Windows 10 Pro until the end of the year. If you get a Surface Laptop, you should definitely take up that offer.
Microsoft is aiming the Surface Laptop at students, who can also claim a 10 per cent discount. It will interest plenty of others, and the build quality does justify the price, while long battery life (ten hours 42 minutes in our video-playback test) makes it wonderfully practical.

But it seems a shame to compromise such a beautifully made machine with a dull screen.

CUT FROM A DIFFERENT CLOTH

The Surface Laptop’s most striking feature is the fabric covering around the keyboard. It’s made of Alcantara, a suede-like synthetic microfibre used in upmarket cars. We like the idea. It’s reassuring to have a soft finish against the screen, and comfortable to rest your hands on. But can it avoid getting grubby? Car seat covers are often made to go in a washing machine. This isn’t.

When asked about this, a Microsoft spokesperson said a special coating makes the fabric more stain-resistant, and recommended a microfibre cleaning cloth dampened with soap and water.

Because the keyboard isn’t spill-proof, you’d want to be careful with a wet cloth. In passing, he quoted the expected life of the machine at ‘four or five years’. For a grand, that would be the minimum we’d expect.

With similar devices achieving 100 per cent sRGB and beyond, the screen is a let-down, but overall this is a very nice laptop indeed

At the same price for an 8GB/256GB option, this is slimmer and prettier but has no touchscreen and a slower processor