WE’VE SEEN A lot of whole-home Wi-Fi systems in recent issues of Shopper, all of which are designed to use multiple access points to give you better coverage. If you just want raw speed and don’t have a huge house, a single high-powered router, such as Linksys’s WRT3200ACM, might be a better option.

This hefty router has Tri-Stream 160 technology, which combines three simultaneous 867Mbit/s streams to give a total of 2,600Mbit/s on the 5GHz band. The 2.4GHz band is taken care of with a 600Mbit/s throughput. As a modern router, the WRT3200ACM supports multi-user MIMO (MU-MIMO). This enables the router to split its bandwidth, giving each compatible device its own dedicated network stream. That’s the good news; the bad news is that there are few MU-MIMO devices, so you won’t necessarily see the benefit of this technology today. Even so, on paper, this is one of the fastest routers we’ve come across. 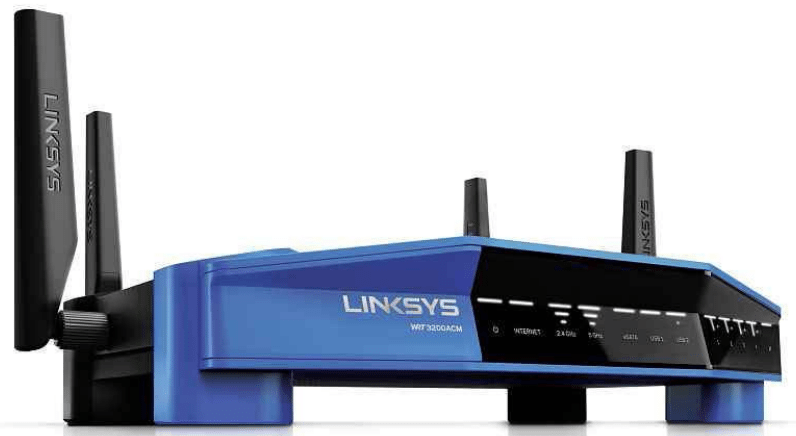 Setting up the router for the first time is easy, with Linksys’s simple wizard taking you through broadband configuration and Wi-Fi setup. This router has a single Ethernet WAN port, so you’ll need to plug it into a modem to get internet access.

Wi-Fi configuration gives you the option of splitting the 2.4GHz and 5GHz networks or joining them under the same network name.

With the latter option, the router uses band steering to select the best network for your connecting devices automatically. This is a good choice for simplicity, but you may want to leave the networks separated if you want to choose which band you want to use.

Finally, there’s the option of a guest network. Connected to this, people who visit you can access the internet, but your other devices remain protected and hidden.

Once the wizard is complete, the WRT3200ACM can be configured via the web interface. It’s one of the best, with a clear and modern look. We like the main page, which gives you an at-a-glance look at all of the router’s main settings.

Linksys has provided all the common options you’d expect, including dynamic DNS, port forwarding and parental controls. Using the latter option, you can set schedules for when certain devices can use the internet, and you can also block access to set websites.

Blocking is a manual job, which requires you to enter each blocked website’s address. As such, you’ll want to use proper parental controls for younger children. We couldn’t find an option to turn on IGMP YouView support.

Without this, our streamed YouView channels, such as BT Sport, wouldn’t work.

Basic settings can be controlled via the Linksys smartphone app, and it’s nice to see Alexa support.

Using an Amazon Echo, you can tell the WRT3200ACM to turn on its guest network or to give you your network details. 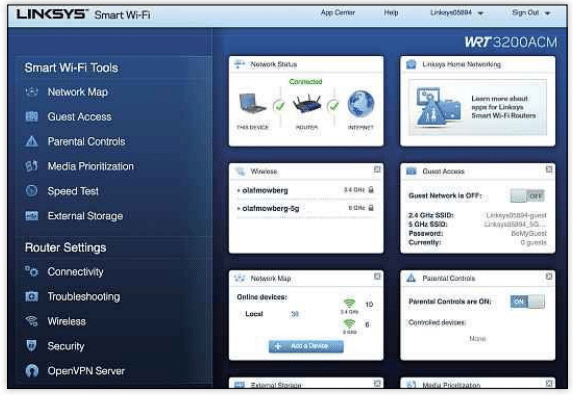 The web interface is one of the best, with a clear and modern look

If you don’t like Linksys’s firmware, this router officially supports DD-WRT and OpenWRT open-source firmware.

Flashing the router with either of these opens up some more advanced features, such as full VPN support. You can also run applications, such as a BitTorrent client, directly on the opensource firmware, making them a good choice for more advanced users.

The C3200 doesn’t have MU-MIMO, but it supports streamed YouView channels, making it the better choice.

A fast and powerful router, but you can get similar performance for less 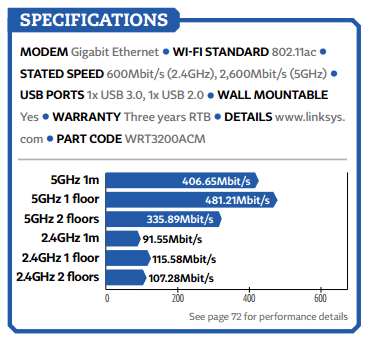