But the Ubuntu universe is a big place these days, with ten different official and community distributions, plus dozens of unofficial ones. One that I have never had the opportunity to try out until now is Kubuntu, Ubuntu’s KDE-based flavor.

At 15 years old, Kubuntu is a very mature distribution. It was first proposed by Canonical employee, Andreas Mueller, on 10 December, 2004, at the Ubuntu Conference in Mataro, Spain. Based on the reputation of the KDE community, Kubuntu immediately gained Mark Shuttleworth’s approval as the first variant of Ubuntu. The first version was Kubuntu 5.04 Hoary Hedgehog, released on 8 April, 2005, just six months after the first release of Ubuntu.

After being sponsored for many years by Canonical and then Blue Systems, today Kubuntu is a community-driven project.

In the African Bemba language Kubuntu translates as “towards humanity”. The 20.04 LTS release also has an African connection, being codenamed “Focal Fossa” after the small cat-like carnivore from Madagascar. 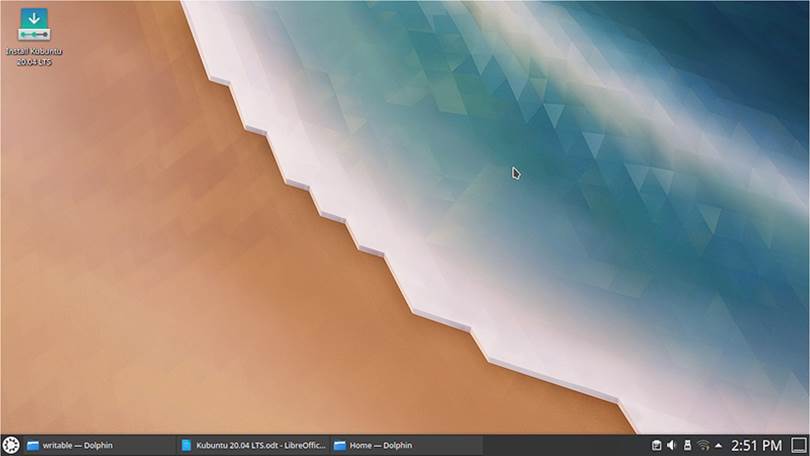 Kubuntu has always used the Qt toolkit-based KDE desktop, but, over the last 15 years, KDE has evolved a lot. The first version of Kubuntu used KDE 3.4. Kubuntu 8.10 brought KDE 4, which became known as the KDE Software Compilation 4.5 in Kubuntu 10.10. KDE Plasma 5 was introduced as a “preview” in Kubuntu 14.10 and became the default desktop in 15.04. Over the past ten releases, since Plasma 5 was introduced, it has been incrementally improved and 20.04 LTS features Plasma 5.18.

I made up a Kubuntu USB installer using the Startup Disk Creator. As with the other Ubuntu flavors, booting from the USB stick now results in an automatic file system check, which is a good idea to ensure your stick is error-free.

Once Kubuntu 20.04 LTS boots up, it shows a rather striking default jagged ice and earth wallpaper called “Next”. The included wallpaper selection gives 27 choices, all of which are quite beautiful. The Desktop Folder Settings also offers plain color desktops, a slide show, “picture of the day”, downloadable wallpaper plug-ins, or you can always use you own wallpaper. This sets the tone for Kubuntu in general, as it is highly configurable in all respects. 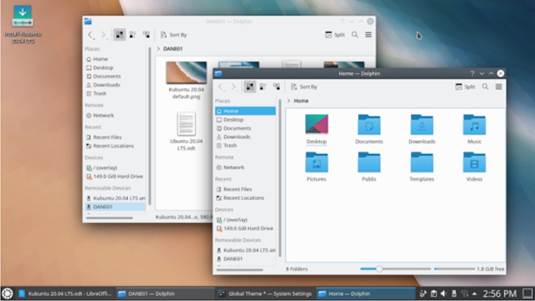 This is markedly different from Ubuntu these days, which has much more limited customization. Kubuntu first and foremost feels like a distribution that is designed by developers for their own use.

Computer desktops these days basically have two paradigms; they are either launcher-based, or menu­based. Ubuntu uses a launcher, while Lubuntu, Xubuntu and Kubuntu use a menu.

The Kubuntu menu opens showing “favorites” and recently used applications. It then has sub­menus for “applications”, “computer”, “history” and “leave”. The “applications” menu has sub­menus for things like “graphics”, “internet” and “office”, and then sometimes sub-sub-menus, too. Overall, it works like Lubuntu’s single menu or the Whisker menu found in Xubuntu, but because each level requires a click, it works more slowly and feels more cumbersome to use. I am sure most users find what they are looking for on the initial “favorites” 90% of the time, which is fast to access. The items on the “favorites” menu can be manually rearranged, removed from the menu, or added to the bottom panel.

It is worth noting that there are desktop widgets that can be installed to replace the menu, such as the Application Dashboard, which adds a desktop icon that 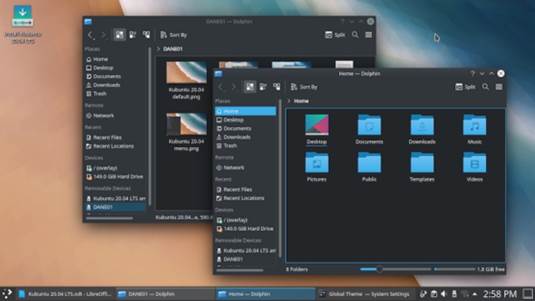 Resizing or dragging windows on the desktop by default results in them going about 50% transparent while being moved, which I quickly found annoying. Being highly configurable, this was easy to turn off at System Settings > Workspace Behavior > Desktop Effects. In fact, the desktop effects have a staggering number of settings available. Just reading through the menus reinforces the idea that Kubuntu is probably the most customizable flavor in the Ubuntu universe, a true embarrassment of riches.

LTS releases tend to focus on stability rather than new features, but this one does bring one new default application, the Elisa music player. It replaces Cantata, which was used up until now.

In general, Kubuntu has its own unique suite of Qt-based applications for the KDE desktop including the Qt version of LibreOffice. The one exception to this scheme is the use of the GTK toolkit-based Firefox web browser. There is a Qt-based browser, 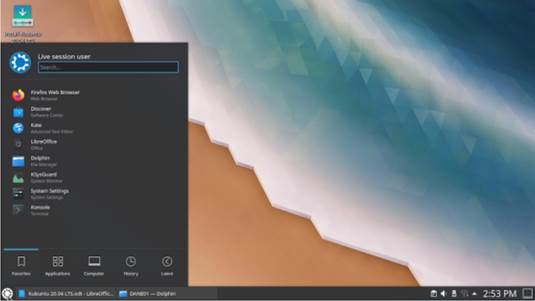 Falkon, and perhaps one day it will mature to the point of being ready to replace Firefox on the Qt desktop, but it is not quite there yet.

Some of the applications included in Kubuntu 20.04 LTS are:

It is interesting to note that, like Ubuntu, Kubuntu 20.04 LTS does not include a CD/DVD burning application by default. This seems sensible in 2020, as neither laptops nor desktop computers have come equipped with optical drives for many years, and CDs and DVDs are getting hard to find. If users install Kubuntu on a computer that has an optical drive, the KDE standard CD/ DVD burner, K3B, can always be installed from the repositories using Discover, Muon or the command-line.

By default, Kubuntu 20.04 LTS also does not come with a webcam application, an image editor, or video editor, although there are several of each available in the repositories, if needed.

There are some inconsistencies in how applications work in Kubuntu. For instance, the native KDE applications, like the Dolphin file manager, have “global menus” that open on the top panel. LibreOffice and Firefox do not, however, and their menus are at the top of their windows instead.

As noted, Kubuntu offers a wide range of customization, probably more than any other Ubuntu-based operating system. Almost anything can be configured or changed on this distro.

Most of the customization is found under “System Settings”, including six different window color themes. Two of these are the obligatory dark themes which are so much in vogue these days. Most of the windowing themes are well thought out and at least make it clear which windows are active and inactive.

By default, Kubuntu has two panels, one at the top to show the global menus and one at the bottom with the main menu “gear” button, open applications, and status icons. Panels can also be placed on the sides, instead of, or in addition to, those at the top and bottom.

Kubuntu features desktop widgets, devices that can be added for extra functionality, such as an analog clock, full screen application menu, CPU monitor, weather reports, activity managers, and even comic strips. Again, this all allows for a high degree of personalization. 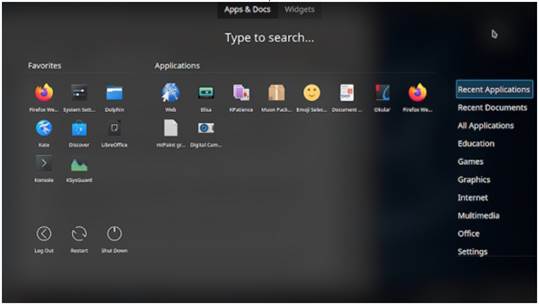 In daily use, Kubuntu 20.04 LTS is quick to figure out and easy to use. The main menu takes a bit of getting used to, but, with some practice, it works well enough, particularly since most commonly- used applications will quickly end up on the favorites menu, which is the first displayed on opening.

I installed the Application Dashboard widget as an alternative to the main menu, and found that it is actually faster and easier to use, basically a complete alternative menu system.

Considering that this is the 31st release of Kubuntu, and the tenth since Plasma 5 was introduced, it really is a very polished and mature Linux distribution, with very little need for improvement.

Where Kubuntu really differs from the other Ubuntu flavors is in its wide choices for user customization. Almost anything in Kubuntu can be changed to get it looking and working the way you want. Perhaps the biggest challenge is to make good notes so that you can duplicate your favorite set-up for any future fresh installation.