HP’s affordable laptop-tablet has changed only slightly on the outside, shaving a few millimetres off its width, but Intel’s eighth-generation processors give the design new life. The configuration we tested is currently only £ more than the i3-7100U we saw last year, but its quad-core i5-8250U puts it in a different league of performance. At a time when prices generally are creeping up, that’s a very welcome development. 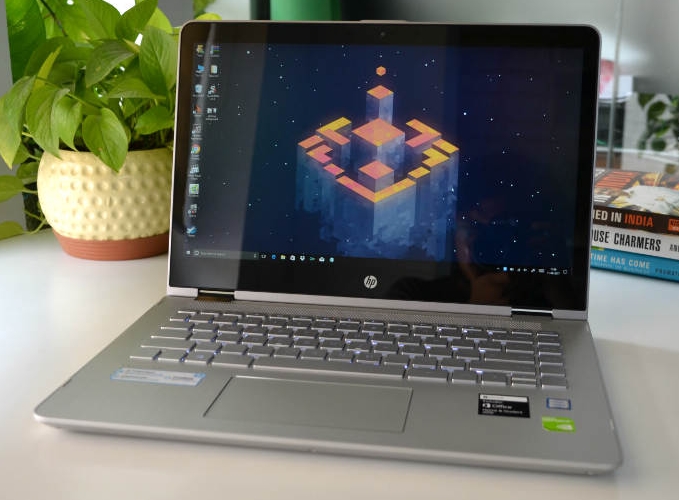 The 256GB SSD is speedy, too – with 1,240 megabytes per second read speeds and 711MB/S write speeds, it’s about ten times faster than typical hard drives. There’s no graphics card, and the integrated UHD Graphics 620 will manage only very light gaming, which is what you’d expect, while the battery lasted a modest 5 hours 30 minutes in our video-playback test.

The Pavilion x360 is made of plastic with a metallic finish, which is by no means unattractive, although we’re not keen on the two-tone styling (silver on the keyboard half and grey on the lid). In fact, they could belong to two different machines, the latter being slim with elegantly minimalist radiused edges, while the former has the chunky curves, grilles and haphazard array of ports that we were seeing in laptops 20 years ago.

Back then, though, they weighed a lot more than the Pavilion’s 1.59kg, and you couldn’t fold them back to use as tablets. Like other laptop-tablets, it feels

awkward and decidedly heavier when you try this, but it works, helped by Windows 10’s Tablet mode. There’s the option of HP’s Active Pen stylus if you want to write or draw on the screen.

In laptop mode, the keyboard is well laid out and shouldn’t trip up your typing, although it has an uncushioned, rattly mechanism that could annoy people around you. The widescreen-shaped touchpad works well. Where compromises literally become visible is in the screen, which remains relatively dim, covers just 62 per cent of the sRGB colour range with poor accuracy, and suffers lots of distracting reflections. It’s perfectly usable, but rules out serious photo- or video-editing work.

It's not for 3D gamers or serious photo editors, but anyone else might be tempted by this quad-core big-name laptop-tablet

With a Ryzen 5 CPU, this 13in is sleeker, with faster graphics but only a 128GB SSD