HP OfficeJet 250 – Scan and print on the move

It’s easy to take printing, scanning and photocopying for granted now that affordable all-in-one devices can handle every task. Most of them even work over the internet, meaning you can print and scan no matter where you are. Except you can’t really. Because if you print out a document to your home printer, you still won’t have it with you, and if you have a document you need to scan, you’re not there to put it on the scanner.

Not ideal if you need to print in bulk, but very effective as an occasional portable printer and scanner

HP may have found the answer to this digital reality check. The HP OfficeJet 250 isn’t the first portable multi-function printer: that honor went to its predecessor, the OfficeJet 150, back in 2012. This update looks slicker, but still has a bit of a problem with the concept of’portable’. It’s portable in the sense that it works off its own rechargeable battery, but at 3kg – around two bags of flour – you won’t want to be carting it around any more than you have to. It’s heavier than all but the very biggest laptops. 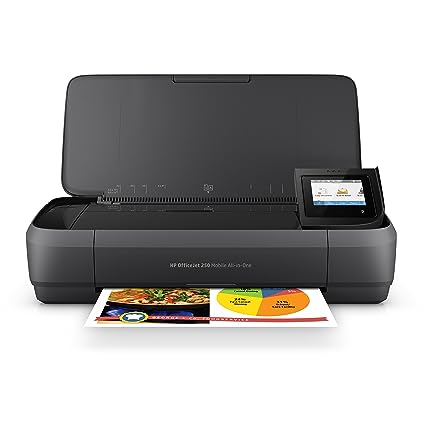 Still, portable it is, and for all that weight you get a reassuringly sturdy chunk of black plastic. It’s a shame the lid doesn’t latch shut securely, but it keeps the dust out and forms a 50-sheet paper-input tray when opened. There’s nothing to catch printed sheets, but they come out high enough to clear a deep-pile carpet, should you find yourself using it on a hotel floor or in your car. A large touchscreen pops up on a spring hinge to let you choose options, a process made simpler by sensors that automatically set the paper size according to what paper you’ve put in.

In our tests, black text came out at 10.5 pages per minute (ppm), which would be slow for a desktop printer but not disastrous. Draft mode increased this to 13.4ppm, while a complicated color graphics document reduced the rate to a still acceptable 3.7ppm. On battery power, these figures fell slightly, but not dramatically.

With no room for a full A4 scanning glass, documents you want to digitize are fed into a 10-sheet automatic feeder, which is convenient but precludes anything that’s too bulky. You can feed in photo prints as well as standard paper, but we found they curled up slightly after passing through the mechanism. An A4 photocopy took 21 seconds in black-and-white or 24 in color. Scanning to a PC took slightly longer, partly because HP’s software sets a minimum resolution of 300 dots per inch (dpi). An A4 color page document took 34 seconds. A 6x4in photo took 49 seconds.

Portable printers typically use tiny ink cartridges that cost a fortune, but HP’s 600-sheet black and 415-sheet color refills work out at 3.2p per black page or 8.4p for color. That’s not much more expensive than many desktop printers, although you don’t have the option of using extra-large cartridges to save money.

Among the specs quoted for any printer is its ‘duty cycle’, the maximum number of pages it’s intended to print per month without prematurely wearing it out. This would usually be in the thousands or tens of thousands. For the OfficeJet 250, HP quotes 500, and it recommends just 100-300. So if you want to use it as your office printer as well, and you regularly print a lot of documents, it won’t be ideal. As an occasional portable printer and scanner, however, it’s very effective, and although the price is three times what you’d pay for an equivalent desktop model, the reasonable running costs make it a justifiable purchase.

This is our favorite portable printer so far, with scanning and copying completing a very practical package

This printer is more compact, but slower, takes smaller cartridges and doesn’t scan