Forget email – you can now send items using your computer’s sound insteadA new, free Chrome extension that lets you ‘broadcast’ files and web addresses to nearby computers using your PC’s sound. Google says the extension “aims to make sharing digital things with nearby people as easy as talking to them”. It promises to let you share items more quickly than is currently possible by email. 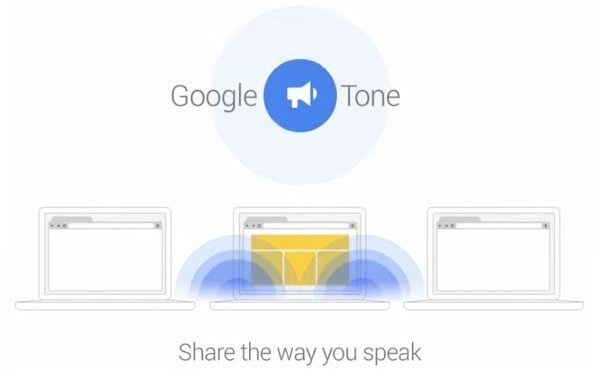 By emitting a short sequence of bleeps that can be picked up by other machines “within earshot”. These bleeps behave just like a human voice does, so they can’t pass through walls, and can be affected by the acoustics of a room and the sensitivity of computer microphones.

It can be a bit erratic, but then it is an experimental feature, so it’s unfair to expect it to work perfectly straight away. Google admits that – by it’s very nature – it can’t be completely reliable: “Not every nearby machine will always receive every broadcast, just like not everyone will always hear every word someone says”. But it worked for us in the Computeractive office. If it doesn’t work, you’ll see the message “Tone couldn’t hear itself”.

Yes. First, make sure you’re logged into your Google account, check that your PC’s volume is on, then add the extension to Chrome from the browser’s web store (https://chrome.google.com/webstore/detail/google-tone/nnckehldicaciogcbchegobnafnjkcne). You’ll now see a blue speaker icon at the top right of your screen. Next, go to a web page you want to share with someone, then click the speaker icon. Your PC will emit the bleeps. Any computer within range that has Tone installed will receive an on-screen notification. Clicking it will open the same web page that’s already open on the ‘sending’ PC.

They could become so after a while, once the novelty wears off. But Google has worked hard to make them palatable to the human ear, following early tests that, by their own admission, “sounded terrible”. The bleeps actually sound rather musical, like the noise we’d imagine a robot makes when thinking.

For instantly sharing files and websites with people in the same room as you. Workers collaborating on a project will find it useful, but so will family members who want to share photos, news stories, YouTube videos or blog posts. Anything you can see online, in fact.

Tone helps to solve a curious paradox about modern technology, as identified on the Google Research Blog (https://ai.googleblog.com/2015/05/tone-experimental-chrome-extension-for.html) by Alex Kauffmann and Boris Smus, who helped to develop the extension. They maintain that while email has made it much easier to share items with people around the world, it’s an unnecessarily long-winded way of sharing items with people in the same room.

No, the Android and iOS app Chirp (http://chirp.io) does something very similar. Launched in 2012 by British inventor Patrick Bergel, it hasn’t caught on as quickly as the early hype suggested (read what the BBC’s Rory Cellan-Jones wrote at the time: https://www.bbc.co.uk/news/technology-18927928). But Bergel hopes that fresh competition from Google will make the ‘internet of sound’ – as he calls it – seem like a more plausible method of sharing items.

Chirp responded to Tone’s arrival by rushing out its own Chrome extension (http://chirp.io/chirp-chrome). The British company is keen to play David to Google’s Goliath, saying: “Naughty Google: Tone is a clone”. Let battle commence!