Elac Debut B6 Review – Designed at the company’s American headquarters, the new Debut B6 is a different type of Elac

It’s Elac Jim, but not as we know it! I have reviewed countless loudspeakers from this established German company over the years, and been impressed by many aspects of the sound, style and design – but the Debut B6 represents a ‘clean sheet’ loudspeaker by a newly hired acoustic engineer, done in a foreign country at a new price point. How’s that for a change of direction? 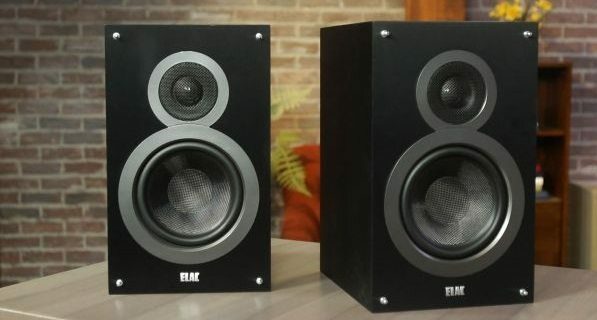 Traditionally, Elac loudspeakers have had a distinctively bright, bracing and detailed sound with a delicate and well resolved treble thanks to the innovative and expensive tweeter. However, the new B6 – designed in Cypress, California – sells at a substantially lower price point than the company’s previous wares – at per pair. For this, says designer Andrew Jones, a completely new approach was required that has meant new, bespoke drive units, careful fettling of less exotic cabinets and a meticulous costing of all the component parts to give the best sound per pound.

It’s also made in China in an effort to keep cost down; were the Debut range produced in Elac’s native Germany, it would need to have cheaper cabinets, drivers and wiring to break even.

Mr Jones’ name is festooned all over this speaker – well, on the box and the rear nameplate at least. Given the illustrious career this ex-Pioneer man has behind him – having worked for the likes of KEF and Infinity, as well as being behind some superb TAD high-end designs – perhaps this is completely understandable. He has masterminded the entire new Debut range, in which the B6 is the second smallest stereo loudspeaker – so it’s an unashamed entry-level product. There are also matching centre channel (C5) and surround (A4) models, along with a new compact floorstander (F5) and a choice of subwoofers. The entry-level B5 is just a little bit smaller than the B6, and lacks some of the bass extension of the model that’s reviewed here.

This loudspeaker is pretty typical for a ‘bargain basement’ standmount, showing plenty of signs of costcutting – albeit nothing that its rivals don’t have. As you’d expect, it’s a two-way reflex port loaded design with a chipboard cabinet and vinyl wrap. I’m not a huge fan of this particular ‘brushed’ finish (some will remember it appeared on Rega Planar 3 turntables in the mid eighties for a while, but I digress), as it looks a little chintzy and means that the speaker is only available in black. The other thing is that, although the finish looks a little fl ashier than some price rivals, just one knock of the knuckle on the side of the cabinet reveals that it’s a decidedly thin box. Again, you wouldn’t expect anything else at this price – yet the finish rather flatters to deceive. The rest of the package is par for the course at this price – from the decently solid binding posts to the plastic reflex port assembly. One let down is the lack of neat magnetic fixings for the grille, though; instead it is held in place by seventies-style clips protruding from the cabinet.

The drive units comprise a 25mm cone tweeter with metal front plate to protect from prying fingers, and a 165mm woven Aramid fibre mid/bass unit that crosses over at a fairly standard 3kHz. Its quoted sensitivity of 87dB is pretty average for the size and price, meaning that most modern amplifiers should get a good, loud punch from it. Elac recommends it’s used with amplifiers rated between 20W and 120W RMS per channel. My reference Exposure 3010S2-D integrated – admittedly a little more expensive than the sort of amplifier that would typically be used with the B6 – has no trouble driving the Elac and indeed it seems a relatively forgiving speaker for an amplifier to drive. In my listening room, I find that it works best on a sand-filled stand, very gently toed-in and positioned about 30cm from the rear wall.

Fun is one thing you can hope for from a budget loudspeaker. Given the fact that the compromises are so great that you’ll never get electrostatic levels of detail or earth shaking bass, any good designer will stick with the midband and engineer it to be as engaging as possible. And this is precisely what Andrew Jones has done with the B6; there’s a sense that it certainly isn’t perfect, but it’s still highly likeable. You can feed it with pretty much any type of music – from classical to jazz via techno and rock – and the little Elac shows every sign of enjoying itself. For this reason alone, considering its price, the B6 can count as a complete success.

I kick off the proceedings with some classic eighties pop from Act. Absolutely Immune is a complex, highly compressed extravaganza that sounds wonderfully overblown and bombastic, and it’s a veritable workout for a small, low-cost speaker such as this. On hearing the Debut B6 for the very first time I am struck by how curtailed it is in its bass and treble. Up top, it seems to muffle the very highest frequencies and they’re rather diffuse; down below, as you’d expect there’s little real deep bass and the upper bass makes you aware that the cabinet needs better bracing.

However, once you’ve got past these issues – and the ear is good at ‘tuning them out’, suddenly you begin to enjoy yourself. Indeed, the Elac bounces along in an appropriately dramatic way, conveying the grandiose nature of the song. In other words, it has great rhythmic control, and allies this to fine dynamic articulation. A less compromised speaker is far better able to carry large dynamic contrasts, but the B6 is still extremely deft with the smaller ones. It’s these that give a sense of real life to the music, along with the speaker’s ability to capture the attack transients of the notes, which is something else that this speaker does well. You can hear it on Cannonball Adderley’s Autumn Leaves, from Somethin’ Else, which relies on a taut double bass-driven groove and some beautifully laid back piano work to get things going. The Elac proves well able to capture the nuances of the timing in the track, and give a really involving window on the recording that gets the feet tapping in a strangely intense way.

On the other hand, focus in on the speaker’s reproduction of the ride cymbal, and you’re suddenly back in your listening room, remembering this is a budget speaker. Treble isn’t bad for the price, but there are rival designs that are a little smoother and more intricate. Ditto the bass; the B6 is a little more extended than most at its exact price point, but it’s just a little less grippy. This gives a bigger, softer and more sumptuous bottom end – which isn’t at all unpleasant – but it’s not strictly accurate, if we’re being honest. Beyond getting all the basics very right indeed, the midband is a little opaque and lacks deepdown, low-level detail. In truth, though, it’s no worse than any rivals in this respect and it decently integrates into either frequency extreme; the B6 certainly doesn’t shout at you like some small boxes.

The great thing about this speaker is that it covers its tracks well; anything you play through it fast becomes a musical event and not an exercise in analytical listening. This is a rare trick to pull off, even for a high-end speaker.

The other aspects of its performance mitigate well for it, too – the speaker images well despite its unfashionably wide baffle and throws instruments well clear of itself, making it possible to dissolve them into space. True, the location of the images doesn’t have the precision of many more expensive designs, but is little worse than the best of the rest at this price. The soundstage is surprisingly deep too; many budget boxes hang the sound around the plane of the loudspeakers but this seems to go a good bit deeper if needed. It’s only when you cue up some classical music that its rather monochrome tonality shows itself; the first movement of Beethoven’s Symphony No. 6 ‘Pastoral’ sounds a little tonally ‘grey’, but once again it proves consummate fun in the musical sense.

Here’s a very interesting speaker. A change of designer for Elac, and indeed a new price point has produced something that has little obvious link to its pricier products. Indeed, it’s quite different to the rest of its rivals too – seemingly eschewing fashionable styling (that wide baffle look is more eighties) and perceived build quality (again, there’s something very old school about this). Yet power the Debut B6 up and it works like a charm, showing itself to have a musically engaging sound that lets you forget about its own limitations, and those of the recording. There are a lot of ‘me too’ loudspeakers currently on the market, but this is most certainly not one of them and as such warrants serious consideration if you’re after an entry-level standmount.