Eizo is best known for making monitors aimed at graphic designers, publishers and other professional users. The Eizo Foris FS2434 monitor is therefore a surprise because it’s aimed squarely at everyday users. It’s more expensive than other 24in 1080p monitors, but it more than justifies this relatively high price. 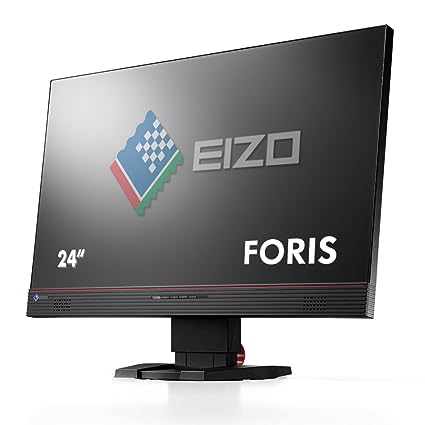 The base rests on a rotating turntable, letting you easily swivel the screen to the desired angle, while the stand can be adjusted by anything up to 60mm. There’s even a built-in carry handle at the rear, which will come in handy should you ever need to relocate it. The incredibly narrow (6mm) borders edging the screen are ideal for a multiple-monitor setup. Put two or three of these monitors side-by-side and you’ll barely notice where one starts and another finishes.

Speaking of which, managing multiple monitors is extremely easy, thanks to Eizo’s G-Ignition software, which lets you adjust picture settings on your monitor without having to use its onscreen menus. To use the software, the monitor must be plugged into your PC via USB 3.0. Any subsequent FS2434s you buy are then daisy-chained to the first display via USB. G-Ignition contains the same image-quality settings that you’d find on the monitor itself. It lets you adjust each monitor separately or as a group, so you can customize your setup very precisely.

If you’re not using a multiple-monitor setup, or simply don’t want to install yet more software, you can use the included remote control instead. This is far easier to use than the fiddly buttons found on many monitors, and makes adjusting your settings a breeze.In addition to DVI and HDMI connectors, there’s a two-port USB 3.0 hub built in, as well as a 3.5mm audio jack for connecting headphones – handy if your PC is tucked away under your desk and beyond the reach of your audio cables. This is just as well because the built-in speakers sound very tinny.

We were impressed by the Eizo Foris FS2434’s accurate color reproduction. With deep blacks and high contrast levels our test photos and HD videos looked superb. There are a few alternative color-mode presets for gaming, but they merely give the graphics a harsh, blown-out look that are unpleasant to look at and are therefore pretty much unusable.

The Eizo Foris FS2434 is a very good monitor with many useful extras. If you don’t need these trimmings however, you can save a few pounds by opting instead for the Dell U2412M, which also has superb picture quality.