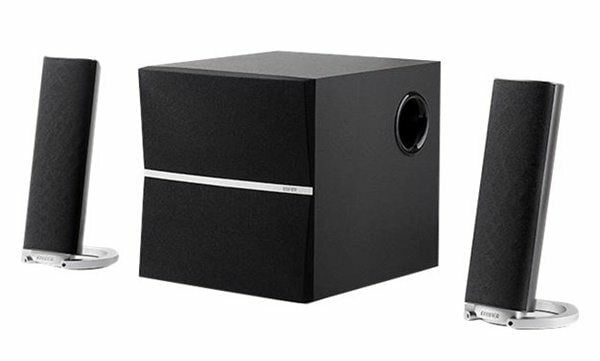 A new set of mid-priced powered speakers from Edifier

I think it’s fair to say that these days most of the population carry mobile phones. It’s also a fair assumption that the vast majority of these are so called ‘smartphones’, which means they incorporate things like a GPS, camera, media player and much more. They also have multi connectivity, including wi-fi and of course Bluetooth. That coupled with the fact that most users carry around their music collection makes them ideal as portable music centres. Their only failing is the quality of the tiny speaker on board, which is why you’ll see most users walking around with earphones perched on or in their ears.

Clearly this has disadvantages when you’re at home or work, when headphones would be restrictive. The alternative to this would be a set of external speakers, and to save the tangle of cables, ideally they would also be Bluetooth..
As I’m sure you know, these come in all shapes, sizes and prices. One of the biggest manufactures of these is Edifier, and over the past few years I’ve reviewed many different sets from this company, varying from those designed simply to add sound to your PC, which tend to be cheap and cheerful, to those like this latest release, which is quite a step up from any I’ve seen before..
The new Edifier Studio M3280BT speakers consist of two relatively small satellite speakers measuring 124mm x 255mm x 125mm, and a large subwoofer measuring 235mm x 244mm x 293mm. They are quite nicely styled, with a matt-black finish. The satellite units are tall, slim enclosures that connect to the bass box with an RCA plug, and unusually a DB15 VGA type plug as well, although once l had the system set up it became obvious why they’d used it. The left hand speaker has the controls for the volume, bass, and treble, and it also includes a headphone jack. Quite a sensible arrangement, I feel, because the bass unit usually sits on the floor, so you wouldn’t want to be crawling around the floor just to make any adjustments. In the case of the M3280BT, the woofer only has an on/off switch for the power..
Connecting to the speakers via Bluetooth is simplicity itself and just matter of scanning from your device until you find the Edifier M3280BT. No password to connect was required and it has a range of 10 metres. If you’re using the speakers with a PC or another media device, you can alternatively connect using the supplied RCA cables. These plug into the woofer, which has dedicated PC and aux inputs..
As far as the sound quality is concerned, given the price, they’re simply superb. The treble tones are bright and clear, and the woofer adds that element of bass depth needed for an all-encompassing sound. As you can tell, I was pleasantly surprised and very impressed by these speakers. They compare favorably with speakers costing twice as much, (if not more). When used with an MP3 player or a mobile phone, they could easily replace a traditional home media centre. Joe Lavery.