OUR VERDICT
The Inspiron 13 5000 is reasonably affordable, looks good and has roughly the same power as some laptops over £1,000. ...
SCORES 8/10
TODAY'S BEST DEALS

The Dell Inspiron 13 5000 is a sign that convertible laptops are now mainstream. Models like this and the Asus ZenBook Flip UX360CA have hints of high-end style and powerful components, matched with a practical approach. Laptops like this mark a renaissance for Windows laptops, once again seriously undercutting comparable Apple MacBooks.

There are three main specifications for the Dell Inspiron 13 5000. The most commonly-sold is the middle variant. It is probably the version we’d recommend most people look into. 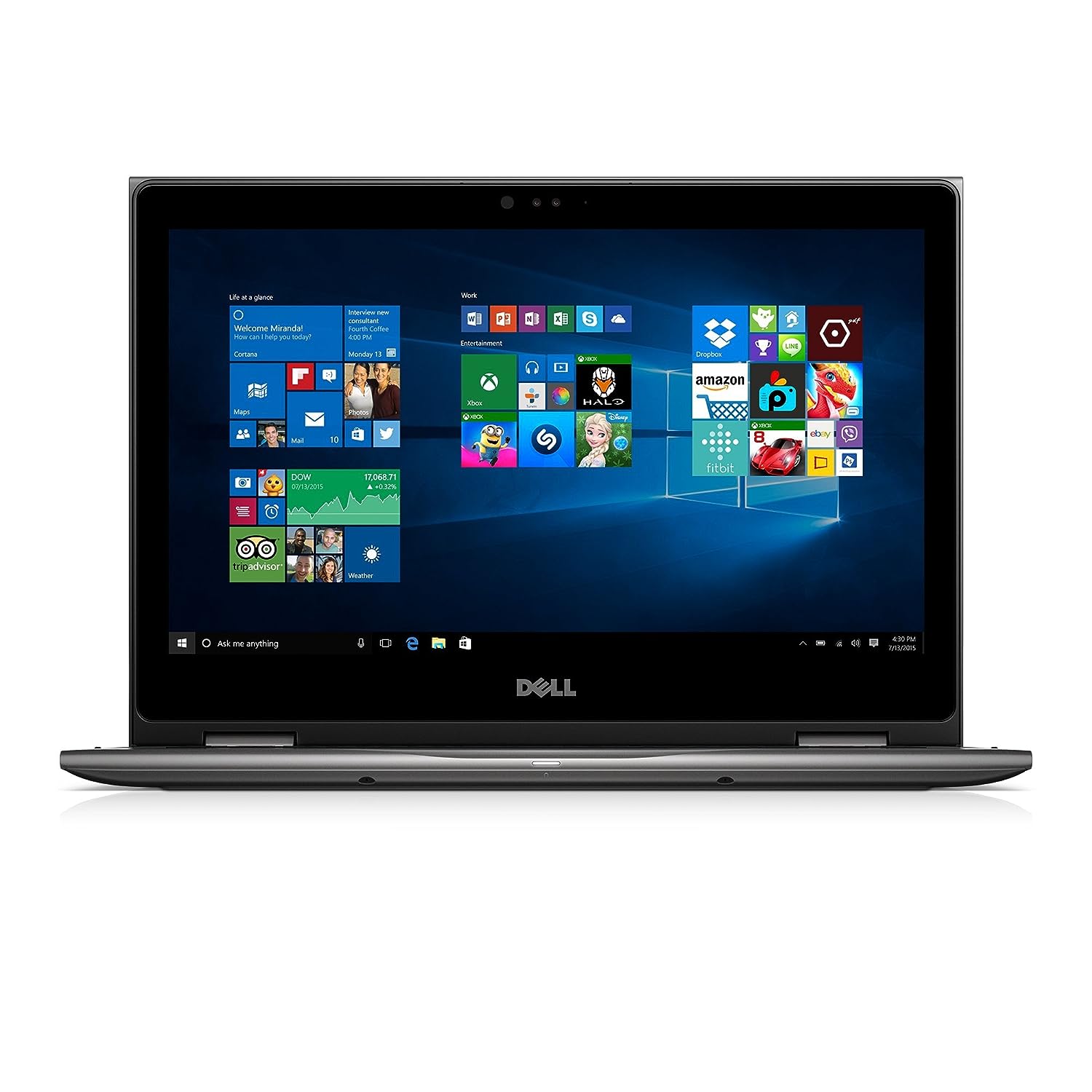 At first glance, the low-end model is alluring, cutting down to a Core i3 CPU and 500GB hard drive. However, it also has a non-IPS screen. We’ve not seen it in person, but it likely uses a lower-quality panel whose viewing angles aren’t well-suited to a hybrid like this. The screen may look funny from the wrong angle, in other words.

The top-end Dell Inspiron 13 5000 we’re looking, and upgrades the RAM to 16GB, the CPU to a Core i7. That’s several hundred pounds cheaper than you’d pay for such a specification list in a laptop with a high-end metal frame.

Dell has pulled off a clever trick with the Inspiron 13 5000. It’s managed to create a plastic, mostly sensible-looking laptop that still has panache and the sort of lifestyle sensibility that makes MacBooks so attractive.

It has a 360-degree hinge, an ultrabook-influenced layout and little hints, such as curved edges around the front of the laptop, that tell you this is more than a boring work machine. Even though, among convertible laptops, it’s definitely the one with a biroin its shirt pocket.

This isn’t a case of Dell being unable to create a stylish laptop – just look at the XPS 13 for proof.

A MacBook Pro with similar specifications to the Inspiron 13 5000. (Granted, the Core i7 CPU Apple uses is slightly higher-end).

In terms of build there are two main sacrifices for this attractive price. First, the entire shell is plastic. Laptops like this often use aluminium for the lid of the keyboard surround for a higher-end feel, but that’s not the case here.

It is, however, rigid, which is more important. The Asus ZenBook Flip UX360C, for example, is a similar device, but its keyboard flexes far too much under moderate pressure.

Not only does this make the typing experience worse but flexing can ruin the trackpad click too. The Dell’s keyboard is flex-free.

The Inspiron 13 5000 isn’t perfect, though. It has a pressure point in the bottom left of the keyboard surround that kills the trackpad click if, say, you rest your elbow on it too heavily. It’s mostly very solid, though.

Its second somewhat budget-related compromise is weight. The Inspiron 13 5000 weighs 1.6kg, a bit heavier than something like the Lenovo Yoga 900, which weighs just 1.3kg. It’s heavy enough that you won’t marvel at its lightness when you first pick it up, but still light enough to carry around with you.

This is nothing like the archetype chunky Dell you may have been lumbered with at work before.

The hinge is more proof of its modern edge. Like other convertibles, it flips around to meet the back of the keyboard, and can stick at any angle. The hinge is one of the few metal parts, and gives it the required strength.

It’s pragmatic, though. Truly design-led laptops make sure you can open the lid without holding the base in place. It’s a classy finishing touch. You’ll need to put a finger on the lower part here, because Dell’s main priority has been making sure the hinge is stiff enough.

You may be familiar with these convertibles by now. The idea isn’t really to make the Dell Inspiron 13 5000 work as a tablet, at least not in the conventional sense. In its tent position, or with the screen flipped so the laptop is resting on the keyboard, the touchscreen becomes the closest control method rather than the keyboard and trackpad.

The hinge may not revolutionize the way you use a laptop, but as the Inspiron 13 5000 demonstrates, you’re not paying an extra 50 percent for the privilege. We’re seeing convertibles this size become more affordable, whereas previously you’d have to pay a lot for them.

If you need more proof of how wide and frankly ‘normal’ an audience Dell is aiming for, just look at the Inspiron 13 5000’s connections. It has two USB 3.0 ports, an extra USB 2.0 socket and a full-size 1.4a HDMI.

This is a great low-maintenance array for a laptop like this. You can plug it into a monitor or TV without a special cable, and the USB ports are designed for today’s gadgets.

It’s just not as well-equipped for the future, though. There’s no USB-C port, which is slowly taking over from full-size USB.

The Inspiron 13 5000 also has a full-size SD card slot. It’s a practical bunch of connectors, just make sure you’re not going to miss having a USB-C in 12- to 18 months. Don’t worry about your next phone, it’s more about ultra-fast peripherals such as SSDs whose transfer speeds are faster than USB 3.0’s, and for attaching a hub that’ll connect loads of accessories to a single port.

There’s no major sense of compromise when it comes to the keyboard. It’s a standard chiclet design, with light but crisp keys.

Typing is comfortable, although the character of the key travel could be a little mellower. This is a case of personal preference, though.

One great extra feature here is a keyboard backlight. There are two intensity settings, and it makes typing in dark rooms much easier.

Asus UX-series rivals at the price don’t offer this, although HP’s range of Envy two-in-ones do.

The trackpad feels cheap in one respect, though. It’s not about the surface, the size or the reliability of the pad, all of which are fine. What we’re not totally convinced by is the high-pitch button click response.

It has the sharpness, viewing angles and general display quality we’ve become accustomed to in a convertible laptop, roughly bridging the gap between a traditional notebook’s screen and that of a modern tablet. It looks slightly mottled when viewed from an angle, most likely an effect of the touch layer, but it’s only obvious when youget up-close.

We think it looks better to human eyes than our colorimeter, the device we use to benchmark screens. In our tests, it recorded that the Inspiron 13 5000’s color covers a disappointing 61.6 percent of the sRGB standard.

This, however, is mitigated by a solid contrast of 1086:1, a glossy finish and the fact the display has a slim construction that makes the most of that contrast.

The recently-reviewed Asus UX360CA, for example, scored a much better 89 percent of sRGB, though light-reflecting air gaps in its display layers make its screen look washed out, spoiling the impact of those colors. The Dell’s display doesn’t look like the screen of a £1,000-plus laptop, but it doesn’t have any glaring problems either.

There are a few things to consider, though. First, this is a glossy laptop, which helps with color. On the downside, because the screen has a layer of glass on top, the Inspiron’s screen is reflective. We recorded a maximum brightness of 243cd/m2 , which isn’t high enough to compete with lots of ambient light. Use it outdoors on a sunny day and it’ll look very dim.

This is powerful enough to use as almost anyone’s main computer, more so than a skinnier-lighter Core M alternative. The only way to get a lot more power in a laptop is to head to a machine with an HQ-series quad-core CPU, though that will be larger, more expensive and have much worse battery life.

Windows 10 is slick in day-to-day use, though this is down to the use of an SSD rather than a Core i7 CPU.

The Core i5 version should feel similar to use until you start abusing the RAM by opening large number if browser windows or using demanding applications.

We see this a lot in mid-range laptops, because the extra performance of a higher-end SSD isn’t going to mean much to your average high street laptop buyer. If that’s what it takes to get a laptop, we’re happy.

The Dell can’t handle games, but if you want a gaming laptop that’s thin and light, you’ll have to save up for a Microsoft Surface Book, which is almost twice.

A few recent titles will be playable if you drop the resolution and visual quality down. At 720p with some of the graphics effects turned off, Alien: Isolation recorded an average score of 31.5fps. You may have to put up with some occasional frame rate chugging, but it’s playable. At 1080p with the visual effects turned back up, the frame rate dropped to 13fps, which is unplayable.

These are recent games, though.

If you have a Steam library of oldies from, say 2005 and before, they’ll run just fine.

As the Inspiron 13 5000 has a Core i3/i5/i7 CPU rather than a Core M, the fans run most of the time, and we noticed a few moments where they seemed to rev up for no real reason. It’s not, however, a loud laptop. Note, its fan outlets are on the very back of the underside, so be careful not to block them or the fans will start reviving.

The speaker outlets are a little temperamental about how they’re treated, too. They sit on the underside at each end, seemingly firing down rather than being angled outwards. This doesn’t help the higher frequencies reach your ears, making the top-end seem rather soft, but Dell has clearly put some work into making the laptop sound beefier than those with traditional laptop speakers. They are loud, seem to extend beyond the laptop’s dimensions and have a nice and thick, if not hugely detailed, mid-range.

Some content causes a bit of mid-range resonance at higher volumes, and there’s no separated bass either. The Inspiron 13 5000 doesn’t have the finer points of sound quality nailed down, but it does sound louder and warmer than we expected.

We have criticisms, but the laptop is a lot louder than our reference 13in MacBook Pro.

Dell says the Inspiron 13 5000 will last up to 10 hours on a single charge. Right away we knew this was a bit optimistic for our review machine as it’s the amount of time we would expect from less powerful laptops.

Playing a looped MP4 720p file, it lasted six hours 25 minutes. That’s not enough for a full day’s work unless you’re luckier than we are, but it’s still a respectable result.

The Inspiron 13 5000 is reasonably affordable, looks good and has roughly the same power as some laptops. Unfortunately, there are a few downsides, including a screen that isn’t as colorful as the best and the plastic casing. On the plus side, it fits in well among its more stylish peers.

The Inspiron 13 5000 is reasonably affordable, looks good and has roughly the same power as some laptops over £1,000. Unfortunately, there are a few downsides, including a screen that isn’t as colorful as the best and the plastic casing. On the plus side, it fits in well among its more stylish peers.

SaveSavedRemoved 0
About
Find out how well products perform with the help of Top New Review's comprehensive tests. Top New Review use some of the most exhaustive testing ...