Home » Software » Auslogics Driver Updater Review: Keep your device drivers up to date with this latest

Auslogics Driver Updater Review: Keep your device drivers up to date with this latest

Keep your device drivers up to date with this latest product from Auslogics. Read our auslogics driver updater review

Computers are complicated beasts at the best of times, but when you start adding all those essential bits of kit to customize it, it can cause compatibility problems. It’s fair to say that most software is pretty well behaved these days, and Windows itself has some fail-safes to help you get out of trouble when something goes wrong. 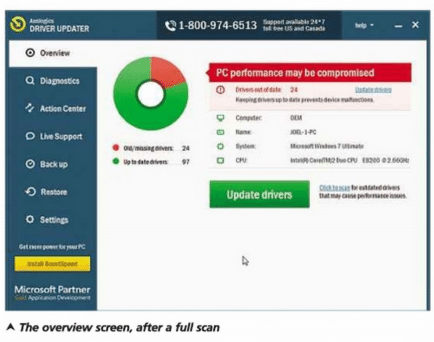 Hardware, however, is a different animal altogether, because most devices need a device driver loaded before they will work. Some of these require the driver to be installed before you add the device, whereas others need the device installed first. Yet how many times have you installed a device only to find that it doesn’t work, or perhaps if it does, then something else in your system doesn’t work anymore?

Well, this latest product from Auslogics is said to overcome these problems by keeping your system device drivers up to date.

The interface is nice and clean, with tabs down the left-hand side listing the options you have available; they include a System Overview, Diagnostics, Action Centre, Backup and Restore. Although fairly obvious by their descriptions, there are other options to consider. For example, the Diagnostics tab will highlight any out-of-date drivers, the display gives very concise details of what they are, the date of the current driver and the date of the new suggested driver. You then have the option to update the driver or click to ignore it. Alternatively, there’s a large green button at the bottom of the interface that updates all the drivers with a single click. 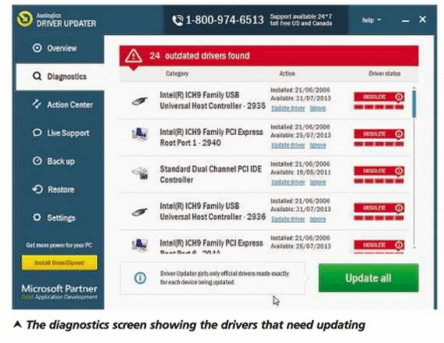 Incidentally, it’s worth checking the details of each driver, because when tested, it flagged an Nvidia High Definition driver for update, yet the update it proposed was older than my existing driver. Naturally, I didn’t allow Driver Updater to change that particular file.

So rather than dive straight in and update the drivers, I would open the backup tab first, and make a backup of your existing drivers, just in case any of the new drivers create a problem with your hardware. This again is a simple process, consisting of ticking the box alongside the drivers you want to backup or, as I did, tick the box at the top of the dialogue which will back them all up.

The program identified 24 out of 97 drivers on my system that needed updating, so after unticking the one driver that I didn’t want to update, I hit the green button and let Driver Updater work its magic. Although the process it pretty much automatic, Windows Security popped up on three occasions warning me of unsigned drivers, which is something of a puzzle, because the system is said to use only drivers from original manufacturers, so I erred on the side of caution and cancelled the installation of the unsigned ones. My motto is ‘If it ain’t broke, don’t try to fix if.

Finally I should mention the rather blatant attempt by the program to get you to buy even more utilities at every possible juncture. In fact, the Action Centre tab exists solely for that purpose, highlighting six other products that it says are missing and would improve your system. One saving grace is that you can disable these notifications if you want to.

An easy to use utility that does what it says to a point, but it’s not perfect.

An easy to use utility that does what it says to a point, but it's not perfect.

Quality
8
Value
8
User Rating: Be the first one!
1 Comment