Since AMD’s X470 chipset was launched earlier this year, mini-ITX seems to be far more popular than micro-ATX, with not a single of the latter yet available with AMD’s AM4 socket. Asus’ ROG Strix X470-i Gaming is the most premium mini X470 board now.

It’s the successor to the ROG Strix X370-I Gaming and the move from X370 to X470 sees the new board offer StoreMI technology support.

This feature moves regularly used data to an SSD and the rest onto a hard disk, allowing you to speed up Windows and programs if you don’t

have a large enough SSD to house them all. Not much else in terms of features have changed. Both boards support overclocking and the new2nd Gen Ryzen CPUs, and they both offer two M.2 ports. 802.11ac Wi-Fi and four SATA 6Gbps ports.

There’s been a small tweak to the M.2 ports, with the old board having one that was limited to PCI-E 2, limiting drives to speeds of 1,800MB/sec. The ROG StrixX470-i Gaming doesn’t completely solve the problem, but the second M.2 slot, which resides on the rear of the PCB does at least offer full PCI-E 3 speed. The downside is that, in order to do so, it steals lanes from your graphics card, which will be forced to run at 8x speed.

Thankfully, you won’t likely see much of a hit in games as a result, but if you have a single M.2 SSD, you’ll want to use the top slot under the large heatsink. This port is also compatible with SATA M.2 SSDs, but it’s a shame the port on the rear doesn’t support them too – an ideal cable-saving setup in a mini-ITX system would be a PCI-E M.2 SSD for Windows and regularly used programs and a cheaper SATA M.2 SSD for other programs and storage.

Such a setup on this board will mean having to use the rear port for your PCI-E SSD, which will not only miss out on being cooled by the heatsink but will also cut your graphics card’s bandwidth.

The heatsink itself secures with two screws, with a large slab of thermal pad underneath making contact with your SSD. It saw the load temperature of our Samsung 960 Evo SSD fall from 76°C to 62°C, so it’s definitely worth using.

The board has received a slight aesthetic tweak too, moving from silver details to moody dark grey. The VRM heatsink is slightly larger too, although the CPU power circuitry remains mostly the same. Strangely, the board still doesn’t come equipped with USB 3.1 Type-C, with no on-board header or rear port, but you do get a pair of USB 3.1 Type-A ports and four USB 3 ports.

There’s decent lighting support too. Whether you want to use standard or addressable RGB LED strips, the ROG Strix X470-i Gaming had headers for both types on the PCB, while the underside and M.2 heatsink ROG logo are RGB- illuminated out of the box and can be controlled using Asus’ Aura software.

Audio is provided by a tweaked version of Realtek’s ALC1220 codec, but there are only three audio jacks on the PCB, so you’ll need to connect your case’s audio jacks to the motherboard’s audio header and use the audio out jack to power side speakers on a 7.1 setup.

Despite all the RGB headers, large heatsinks and the trio of fan headers, there are no major layout issues, with the only niggle being that two of the four SATA 6Gbps ports are located to the left of the DIMM slots, so you’ll have to route SATA cables haphazardly around them.

Meanwhile, the EFI is excellent, as we’ve come to expect from Asus, with a familiar-feeling set of overclocking tools despite it being an AMD board. There’s manual vcore control as well as base clock adjustment, so you should have no issues applying a full overclock in the EFI instead of using AMD’s Ryzen Master software. The fan control section only has to contend with three headers, but you’re able to switch

The underside and M.2 heatsink ROG logo have RGB illumination

The on-board sound managed a -108dBA noise level and 113 dBA dynamic range, which are typical of good ALC1220 audio codec boards. This mini AM4 board also had no problems reaching 3,400MB/sec read and 1,875MB/sec write speeds with our M.2 SSD.

It managed reasonable results in our RealBench tests too, with a system score of 194,649 at stock speed. We also managed to reach 4.25GHz with our Ryzen 72700X using a 1.425V vcore, which is one of the best results we’ve seen so far. This overclock resulted in the some of the best benchmark results we’ve seen, with the Strix X470-l Gaming’s system score of 213,349 being nearly 10,000 points higher than that of the Asus TUF X470-Plus Gaming. However, this overclock did result in higher power consumption figures, with the system drawing 360W from the wall with the CPU under full load.

It’s great to see Asus continuing to support mini-ITX, and offering the most feature-packed, high-end mini-ITX board for AMD’s X470 chipset. The ROG Strix X470-i Gaming is perfect for an overclocked dinky 2nd Gen Ryzen system. It

doesn’t offer much more compared with the ROG Strix X370-I Gaming. The ROG Strix X470-i won’t need a BIOS update out of the box to support 2nd Gen Ryzen CPUs, plus it offers StoreMI support and could support more CPUs than its B350 and X370 siblings in the future, justifying the extra cash. 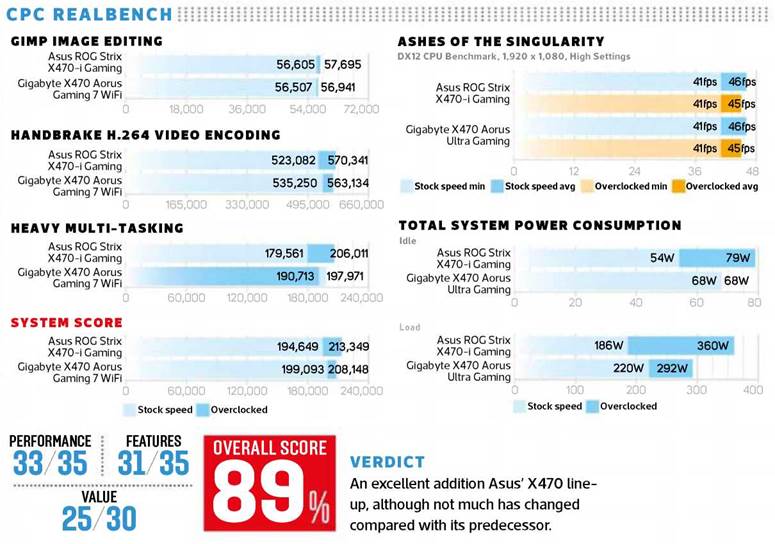 £569.99
Added to wishlistRemoved from wishlist 0

£276.06
Added to wishlistRemoved from wishlist 0

£243.79
Let us know your thoughts on a product or view reviews from our members, independent experts and other websites.