Old faithful AM4 motherboard made manifest

Asus is a behemoth of a company, split into different divisions dealing with graphics, peripherals, monitors, mobile devices, and everything else, with divisions upon divisions upon divisions, each with the aim of producing and maintaining products aimed at its own target audience. Take the motherboard division, for example. Inside this monumental substructure, you’ll find Republic of Gamers, TUF Workstation, and the Pro series of mobo teams. Each team working independently of one another, both in motherboard design and BIOS/UEFI development. 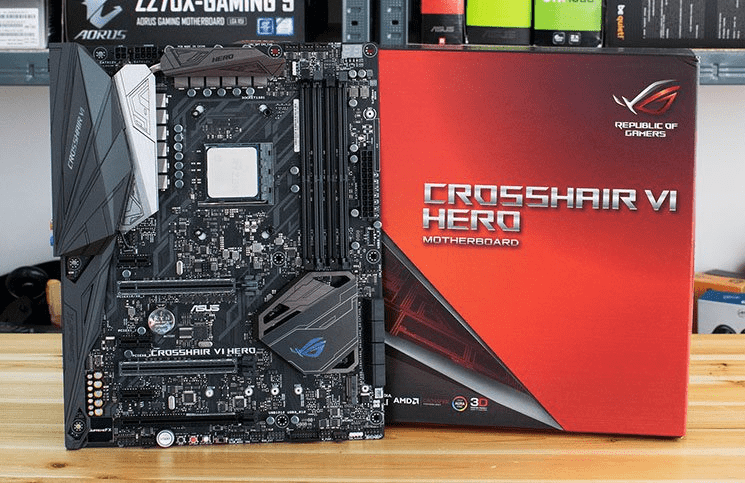 Why do we bring this up? Well, it’s to do with motherboard choice. Not all Asus motherboards are born equal. This Crosshair VI, plied with the latest BIOS update, is a phenomenal piece of gear, more than capable of hitting higher than 3.000MT/s memory overclocks, and one of the easiest plug-and-play kits we’ve seen. It’s nothing short of awe-inspiring.

For anyone accustomed to overclocking on Z77 Asus motherboards and above, very little has changed, with all the same options readily available for those people who like to delve into the Digi+ Power Control settings within the BIOS.

Overall performance was impressive. Memory latency was the lowest we observed, and computational performance was well within margin of error. We did see some rather impressive low and peak power draw overall, but still couldn’t push our Ryzen 7 1800X sample any higher than the 4.0GHz across all eight cores that we’ve seen elsewhere. What really impressed, however, was the undervolting. We managed to net an impressive 1.2V on the V Core, dropping temperatures by 10 degrees in the process.

The real sweet spot of the Crosshair VI, though, lies in its vast arsenal of rear I/O. We re talking two full banks of four USB 3.0 ports, one bank of USB 2.0 ports, one USB 3.1 type A, and one USB3.1 Type C, alongside a BIOS reset switch. Intel Gigabit Ethernet, and 5.1 audio, with optical out. Couple that with the vast array of SATA and M.2 support buried on board, and it’s a genuine force to be reckoned with.

It does come in at a pretty hefty price premium of overall, but for what you’re getting, it’s honestly one of the best— if not the best—Ryzen motherboards out there to date. Cooling support is ample, overclocking prowess pretty prominent (more applying to higher-end memory kits), and the BIOS that Asus’s ROG division is pumping out is improving memory support by leaps and bounds.

With fantastic rear I/O, strong overclocking and DDR4 support up to 3,200MHz, it's great value.