Built for spills, not for thrills Jacob Grana is left cold by the latest rugged Chromebook from Asus.

The Asus Chromebook C202, with its giant keyboard font and rubber bumpers, may look like an alphabet-singing ‘My First Laptop‘, but, this Chromebook is no fragile toy. Designed with the student in mind, the Asus C202 is built to weather all types of day-to-day adversity, be it backpack G-forces, clumsy adolescent hands or careless tosses in the classroom. 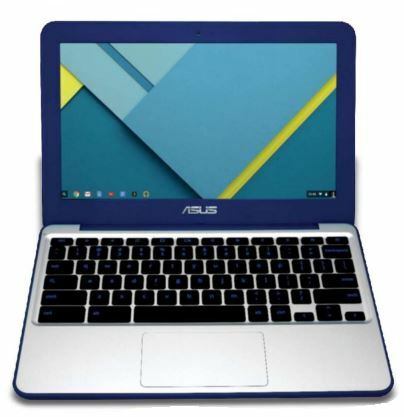 Like the tortoise, the C202’s main line of defence is a rigid shell: dimpled plastic covers the laptop’s lid and base. Additional shielding – thick, midnight blue rubber bumpers – runs along the C202’s edges.

All this armour doesn’t make for an elegant profile, but it does provide a good degree of ding, dent and drop resistance. According to Asus’s tests, the C202 can withstand a 4-foot drop landing flat, and a 2.5-foot fall landing on its side.

This defence-first philosophy continues with the C202’s screen, hinge and bezel. The hinge allows the screen to tilt 180 degrees, a flexibility intended to safeguard the lid and hinge against sudden pulls or tugs. The large bezel provides plenty of grabbing room for lid-lifters too impatient to pick up the laptop by its base. Despite all these wise reinforcements, the C202 is far the entire input structure.

The keyboard repels up to 60ml (2,23 ounces) of liquid, and any that leaks into the interior can be drained by merely flipping the laptop over. With two millimeters of travel, the C202’s chiclet-keys descend so deep the Marianas Trench is jealous. And all that travel isn’t undone by sponginess either: every key, from the top of the keyboard to the bottom, quickly bounces back after you press it.

There’s nothing exciting about the C202’s display. Its colours are demure. Its viewing angles are frustratingly narrow. Its anti-glare coating is missing in action.

The thin speakers are located near the base of the laptop, underneath the rubber bumpers, making audible, unmuffled sound an impossibility.

It’s worth mentioning that the C202’s Wi-Fi antenna is particularly potent. Previous Wi-Fi deadzones for other devices saw the C202 in those same areas ramps up to three bars. 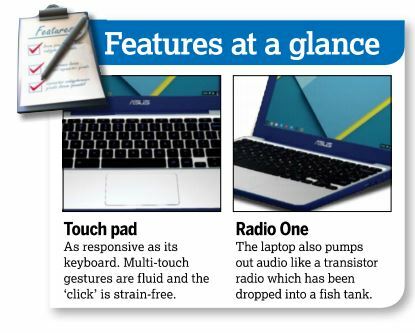 Here’s how the Asus C202 performed in our suite of Chromebook benchmark tests: Octane: 8,303, Mozilla Kraken: 3,913,8, As the benchmarks show, the C202’s JavaScript performance is mediocre. The Acer C740, for comparison, scored nearly 60% better on the Octane and Kraken tests.

In day-to-day use, the C202 handles multiple browser windows and applications well enough, but open too many and the device slows down considerably. Websites with pop-up and auto-play video often fail to load completely unless refreshed.

It might look better than average, the annoying truth is that it’s not.

Under battery testing where a HD movie is continuously looped at 50% brightness and 50% volume, the C202 actually fares quite well: it lasts a school-day-ready 8 hours and 42 minutes. On the same test, the Dell Chromebook 11 musters 8 hours of playback. But the budget Chromebook battery crown belongs to the Acer C704. At 9 hours and 35 minutes, it handily edges out the C202.

Asus’ latest Chrome OS laptop is simply underpowered, especially when compared to similarly priced Chromebooks. More so than its poor visuals and audio, the C202’s shoddy multitasking is what holds it back.