Apple’s obsession with  making its iPad tablets  thinner and lighter every  year is a philosophical  statement. The computer  should disappear; all that should  be left is the app. That’s Apple’s  genius, and something Android  tablet makers have trouble  matching. That’s also what has  made the iPad our top pick for  large-screen tablets since the first  model came out in 2010. The iPad  Air 2 has a few key improvements  over last year’s version, a couple of  which are especially meaningful: a  powerful processor and the first  multi-carrier SIM card we’ve seen  in the U.S. So yes, the iPad Air 2  pushes the state of the art forward,  and is a worthy Editors’ Choice. 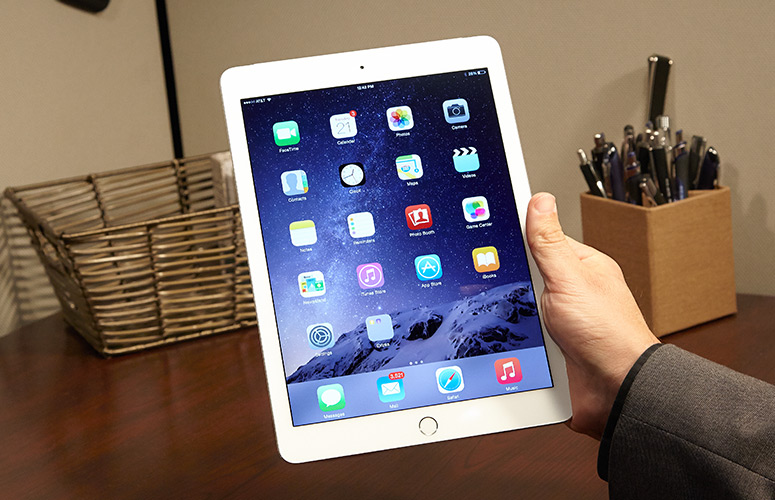 The iPad Air 2 is super slim. At 9.4  by 6.6 by 0.24 inches (HWD) and  15.4 ounces, it’s the same height  and width as the previous iPad Air,  and just a teensy bit thinner and  lighter. Just like the previous  model, this one is backed with dun-colored metal (gold, gray, or silver) and fronted  with glass (and either a white or black bezel, depending  on the back color you choose). The Home button has  been switched out for Touch ID, Apple’s signature  fingerprint sensor, which now lets you unlock the tablet,  buy things online, or log into, say, your Dropbox  account with a touch of a finger. Along the bottom  panel, the two rows of small speaker holes have been  replaced by one row of larger holes. On the right-hand  side, the lock switch is gone.

The 9.7-inch LCD screen is the same 2,048-by-1,536  resolution with 264 ppi as the inaugural iPad Air, but it  has a new anti reflective coating and it’s been optically  bonded. That means blacks look noticeably blacker and  colors a little more saturated, although we’re nowhere  near super-saturated Samsung Galaxy Tab S levels.
Apple’s existing iPad Air Smart Covers fit the Air  2 just fine. More rugged or tighter-fitting iPad Air cases  may not fit, because the camera and volume rocker have  both moved ever so slightly.

NETWORKING AND THE APPLE SIM

Apple claims this iPad Air’s Wifi is twice as fast as the  previous model’s, with 802.11ac support running up to  866Mbps. The problem there is that almost nobody’s  Internet connection is 866Mbps. Still, against a  100Mbps corporate connection with a Meraki MR16  router, we saw pretty much the same (very good) speeds  on both tablets.

The big advance here, though, is the Apple SIM— something you couldn’t get in any earlier iPad model. If  you buy a cellular iPad that’s outfitted for AT&T, Sprint,  or T-Mobile, you’ll get a single SIM card that can be  switched between the three carriers’ prepaid plans (and  EE, in the U.K.) in the iPad’s settings. The SIM is  removable just like any other SIM, and if you buy a  Verizon model, you’ll just get an ordinary, single-carrier  Verizon SIM in the slot. The single iPad model sold in the U.S. supports all of the U.S. carriers’ arcane bands except one (T-Mobile’s  700MHz Band 12, which hasn’t even been deployed yet). If Apple gets more  global carriers on board, this could be a real boon for world travelers.

The reason the full-size iPad keeps winning Editors’ Choice awards is that there  are whole categories of apps you’ll find on iPads that don’t exist for Android  tablets. Or there are under-featured Android versions. Apple is way ahead on  creative and productivity apps, for instance. There are Google apps and Amazon  Prime Streaming apps. The iPad is the one tablet platform all developers, except  the most extremely hacker-focused, consider a must.
Inside the iPad Air 2 there’s a 1.5GHz, 64-bit Apple A8X processor, but don’t  listen to all of that gigahertz and bit width stuff, because Apple’s processor  design makes for faster performance than other competing devices. The Air 2  scored 63,264 on the AnTuTu system benchmark and 4,580 on the Geekbench  3 processor benchmark, as compared with around 30,000 and 2,863 for the  iPad Air, and 35,000 and 2,770 for the Samsung Galaxy Tab S.
On the SunSpider browser benchmark test, the tablet scored an impressive  311.8ms, which is in the same class as the iPhone 6 and iPhone 6 Plus (360-380 ms), and faster than we’ve ever seen Google Chrome operate on any  Android device (the Tab S clocks in around 1,000ms).
You can see the power of the A8X with movie exports in iMovie. In testing,  exporting a 2-minute movie to 720p took 19.5 seconds on the Air 2, as  compared with 34 seconds on the original Air. Wow. But I didn’t see such a dramatic change in other productivity apps. Opening a giant spreadsheet in  Microsoft Excel only dropped from 26 seconds to 23 seconds. And resizing 24  photos in the third-party Reduce app took 28 seconds on both the old and new  tablets. The iPad Air 2 has a blazing engine, but third-party developers really  need to open up the throttle.
The Air 2’s super-slim build means endurance falls a bit short. The battery life  of 5 hours, 15 minutes, when streaming a YouTube video over Wifi at  maximum screen brightness is about the same as with the previous generation  (5:36). Cut the brightness in half, and you have Apple’s estimation of 9 to 10  hours. Neither tablet can come anywhere near the Samsung Galaxy Tab S 10.5,  which gives you two more hours of heavy use between charges.

The iPad Air 2 now has an 8-megapixel camera on the back, joining its 1MP  front camera. That’s a jump up from the 5 megapixels on the iPad Air, and the  main camera now supports 120-frames-per-second (fps) slow motion recording.
Apple has done a good job making sure the front camera takes sharp selfies,  though it gets noisy in low light. The main camera has been significantly  stepped up from the iPad Air’s camera. HDR mode now works properly,  balancing exposures and not blowing out bright skies. Low-light performance is  not up to iPhone 6 standards—images are significantly grainier than on an  iPhone, although fortunately they don’t blur too badly because the shutter speed  doesn’t run lower than 1/15 second.
The video modes now record 1080p video with the main camera and 720p  with the front camera, both at 29 to 30 fps indoors and out. There’s no optical  image stabilization, but as I  found in testing the iPhone 6  Plus, that can be a shibboleth  that doesn’t actually improve  your image quality if it isn’t  part of a larger package of lowlight improvements.

The iPad line has always  made excellent music and  video players, and Apple  didn’t mention that the iPad  Air 2 is much louder than the  previous iPad Air. It’s easily noticeable when they’re playing the same content.
I wouldn’t call it room-filling, but it’s certainly a  step up. At maximum volume, sound doesn’t  distort, but the tablet vibrates noticeably.

But the fact remains that the iPad Air 2 is the  best tablet for the most people. You probably  don’t need to replace your iPad Air—there’s not  enough here to merit the cash outlay—but the  drop in weight and improvement in Wi-Fi  performance, among other things, make replacing  an older-generation iPad with an Air 2 a good  idea. If you’ve never had an iPad, the Air 2 is a  no-brainer. Unless you have a distinct reason for  purchasing another tablet, for example because  you really want to use Windows apps or you crave  parity with the operating system on your phone,  the iPad has more elegant apps than any other  platform. And if you’re just looking for “a tablet,”  it’s still the default—and for good reason.