AOC U2777PQU Review: AOC puts quality as the top priority in the stunning

You can buy a 4K TV, if you’re willing to accept some major limitations, but realistically would you use this as a monitor?

The apparent similarity between TVs and monitors in the technology does lead many people to wonder if the extra for a monitor is worth the extra? 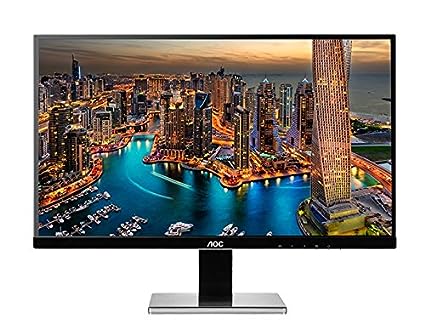 The best answer I’ve seen is the AOC U2777PQU, because this isn’t a TV and does things that a TV never realistically could unless it cost considerably more.

4K monitor for those with few budget limitations

Technically, there are two versions of this screen. AOC makes the U3277PWQU, a 32” variant with an AMVA panel, and the 27” U2777PQU reviewed here with an enhanced IPS panel technology.

They’re both built to generate 100% of the sRGB color gamut range, though the U3277PWQU panel also claims to cover 95% of NTSC, the American TV standard.

As that strongly suggests, the target audience for these screens are those working in the media and video editing business and who like their color calibration accurate.

AOC puts quality as the top priority in the stunning U2777PQU On unboxing U2777PQU for the first time, I was initially struck by how relatively heavy it is, compared with other 4K UHD screens I’ve handled recently.

Weighing in at 7.3kg with its removable stand, I expected most of that mass to be in the support, but it isn’t. Only 2.1kg is the stand and the majority of weight is in the substantially built monitor.

The stand is interesting in a number of ways, not least that it that allows a very wide range of movement and rotation. But it also doesn’t connect using a proprietary connection, just a VESA 100 panel with provided screws.

This means that should you mount the screen on a wall or pillar mount the stand could be reused by any screen with a VESA 100 holes in it.

The stand offers a vertical travel of 18cm ,and the panel can be spun through 165º and tilted 4º and back 24º from the vertical.

Displays that flip in this manner are useful for working on page layouts or websites, though only if the panel handles alternative viewing angles well.

The AOC U2777PQU has no problem in this respect, because its viewing angle is 178º in both axes.

What slightly confuses me about the AOC U2777PQU is the input selection, because it’s not exactly screaming ‘graphics designer’.

The four inputs that AOC gave this panel are DisplayPort, HDMI, DVI and VGA. Seriously , why add VGA and not another DisplayPort?

What’s important to realize is that you can only get the full resolution and 60Hz refresh on DisplayPort or HDMI 2.0.

On most Intel-based systems using integrated GPU, you’ll be limited to either a lower resolution or 30Hz, and that makes the pointer noticeably lag on such a high resolution display.

Those wanting to play games on this display will probably need to use DisplayPort, and they’ll need a really meaty video card.

My Zotac GTX 960 was borderline playable on most 3D titles, suggesting that perhaps a GTX 1060 or AMD equivalent is a minimum requirement for gaming as 4K res.

Therefore, when you consider what you’ve probably spent on your system already , the £519 that this costs probably won’t faze you.

AOC also put a really good USB 3.0 hub in the panel, enabling you to tidy up your cabling and use the screen as the means to connect your mouse and keyboard.

There aren’t any speakers, though a headphone jack and audio line-out are included, along with cables for audio, USB, HDMI, VGA and DisplayPort.

Being IPS, the response level of the U2777PQU is good for an IPS panel, though not the TN level that hardened gamers demand.

For general use, displays like the U2777PQU do tend to point out the well-documented limitations of Windows in respect of very high resolution displays.

On Windows 7, the interface seems painfully small, with desktop icons being only about 6 mm high.

Windows 10 has a scalability function that goes wrong as much as it works correctly , putting some apps in one scale and others in entirely another.

Owning such a lovely monitor as this is, you’d be inclined to find workarounds and fixes, but it’s not an ideal scenario.

Putting aside the vagaries of Windows, the U2777PQU is exceptionally well built and specified.

The price isn’t cheap, but you’re probably getting what you’re paying for in terms of color accuracy and image stability.

Because of scalability issues, most people might prefer the bigger U3277PWQU option, particularly if they’re not the ones paying.