This affordable 24in monitor from AOC is sturdily built and, with a few tweaks, can deliver a good performance

This 24in monitor is one of AOC’s cheapest. 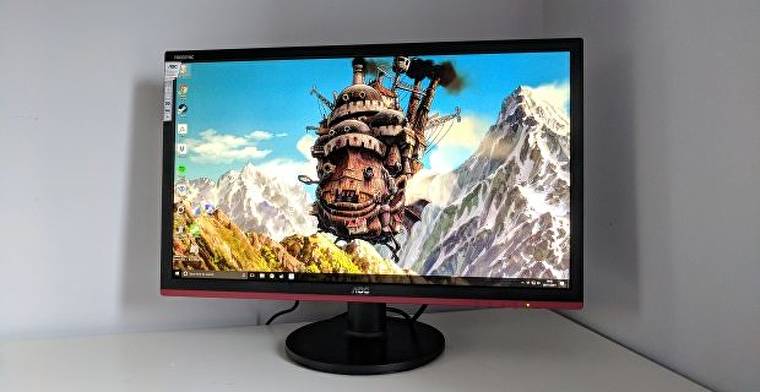 However, it still has a solid, sturdy body and enough ambition to stand out from the crowd.

Its circular stand has a smart brushed-metal effect and the area beneath the screen is decorated with a curved red band that houses the OSD buttons.

Its back panel is reassuringly resistant to bending and the base is solid and doesn’t wobble.

The only indication that this is a budget monitor is the relative lack of adjustment options: you can tilt it, but that’s all.

It also has thick bezels around all four edges, but that’s not a problem unless you’re considering a multi-monitor setup.

If you have AMD graphics hardware installed in your PC, this monitor is compatible with its FreeSync technology (bit.ly/fsyn452), which basically ensures that the graphics and monitor are operating at the same speed to create smooth animation. The monitor peaks at a 75 MHz refresh rate, which might fall short of the capabilities of the very latest graphics cards, but should be fine with a modest PC.

We found it worked well with our test PC, proving smooth and consistent while gaming.

There are two built-in 2W speakers but their output isn’t great – you’ll be better off channelling sound through separate speakers or using headphones. It has sufficient video outputs – DisplayPort, HDMI and VGA – but there’s no USB port, which is unusual for a new monitor.

We were also disappointed by the OSD (on-screen display) that’s used to choose options – it opens across the bottom of the panel and uses awkward horizontal menus that are slow and confusing to navigate.

The monitor’s performance delivered mixed benchmark results. Out of the box, its contrast ratio of 706:1 is middling and its black level of 0.37cd/m2 isn’t the best, though it’s still pretty good for a screen at this price. After some experimentation, we found that the monitor’s sRGB setting, which you can select from the OSD, was the best built-in option. This improved the contrast ratio to 769:1 and proved capable of recreating 96.8% of the sRGB colour standard, which is a

It worked well with our test PC, proving smooth and consistent while gaming

Perhaps the biggest problem we found was the uniformity of the panel – it lost 14% of its backlight power in its bottom-left and top-right corners.

The AOC’s performance could be a lot better. It doesn’t do anything seriously wrong and its built-in sRGB setting can be used to deliver broadly better results than the out-of-the-box setup.

AMD FreeSync support alongside a decent selection of inputs and a good build quality, make it a bargain.