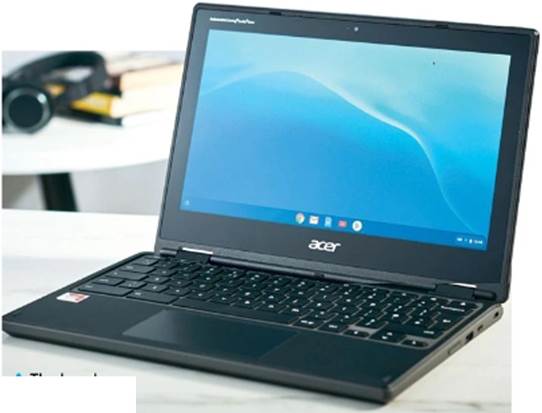 The bezels on the screen limit its size.

The Acer Chromebook Spin 311 is a great little Chromebook that has impressive levels of versatility, as well as satisfying interaction and usability. Just using the Spin 311 is a joy. and the design and build quality of this device are immediately apparent as soon as you take it out of the box. We’ve got our hands on the updated 2019 model based on the newer AMD A4 processor.

The design of the Spin 311 is sleek and subtle, sticking to black to make it as aesthetically unobtrusive as possible, while the diamond-shaped pattern detailing on the back of the screen is a nice touch.

Embedded into the black chassis, the keyboard and touchpad are as easy as ever to use on a Chromebook. Responsive and punchy, with pleasing clicks and actuation, typing and other menial tasks are satisfying. However, the keyboard, despite being the same size as on other Acer Chromebooks, does feel a bit small due to its place in a smaller design. We did get used to this more cramped design in time, but it took us a while. The only other slight concern here is that there is a bit of flex in the keyboard, which starts to show itself if you’re a heavy typer.

The screen is pretty good, though a bit of a double- edged sword as we had to increase the brightness a fair chunk to see images more clearly. The increase in brightness made the screen brighter, obviously, but only in the sense of it getting lighter and whiter; colours and contrasts doesn’t follow suit.

Despite having a modest component set. the Acer Chromebook Spin 311 always handled whatever was thrown at it. Having far too many chrome tabs open, running and listening to YouTube or Spotify, and messaging on apps all at the same time never revealed any stuttering or trouble that the AMD-based hardware,

supported by 4GB of RAM. couldn’t cope with. The Spin 311’s processor performance remains average but is a modest step up from the previous Intel Celeron N3350.

Utilising the spin mechanism of the Acer Chromebook Spin 311 to turn it from a laptop-like device to a tablet-like one is great fun. but also handy, particularly in combination with the touchscreen.

The battery life is pretty average. It clocked more than eight hours in our movie test, which is good going, and shows that it’ll safely last you a working day away from the office. However, many other models will happily deliver 10 hours or more, while it charges via USB-C from flat in two hours.

If you want something with a bigger tank, the larger Acer Chromebook 314 might be a better choice. However, the compact nature of the Acer Chromebook Spin 311 makes it an ideal smaller device for those who are looking for something that you can basically use one-handed.

The Acer Chromebook Spin 311‘s versatility makes it a great all rounder, supported by good battery life and interactivity.