No so long ago 1080 HD monitors were the bee’s knees, but these days the modern enthusiast can opt for something that’s four times better.

4K may be something that’s bandied about without any regard to what it actually means, but once you see the difference it’s really quite astounding. 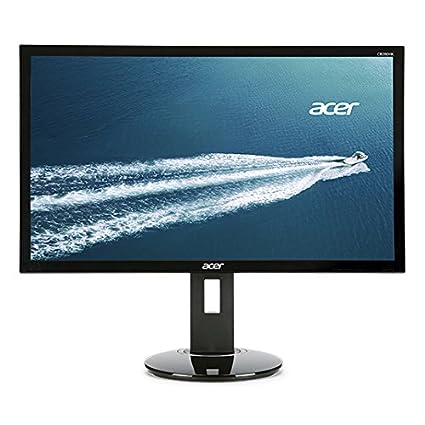 TOP NEW REVIEW has been looking at six examples this week.

You could argue that you get what you pay for (in this case, the latest and greatest in visual technology), but nearly for a single screen is still extravagant.

Acer, however, has put the cat among the pigeons here Rather than charging the king’s ransom that most other manufacturers ask for 4K wonderfulness, it put its latest screen on the market for a more reasonable price.

The Acer CB280HK is a 28 twisted nematic film LED monitor capable of displaying resolutions up to 3840 x 2160.

If that wasn’t enough to pique your interest, then the 1ms response time, 100,000,000:1 contrast ratio, DVI, HDMI, DisplayPort and Mini DisplayPort may tantalize you even further.

It’s surprisingly adaptable too, with adjustable height and tilt angles, plus there’s MHL (Mobile High Definition Link) on one of the connections, so you can hook up your smartphone and enjoy the whole office in your pocket thing, with the added bonus of having a large, ultra-HD screen.

The quality throughout is generally good.

The large-ish bezel is a little off-putting to begin with, but that soon becomes a background annoyance which you’ll gradually get used to.

The base, though, doesn’t feel all that good; it does the job it was designed for well enough, but it feels a little flimsy and perhaps a little too plasticky.

Saying that, we didn’t hear any creaks and cracks and sounds of plastic under stress as we moved the screen around when making tilt and height adjustments.

Naturally, the screen quality is the element that will ultimately draw in the crowd.

Once you’ve experienced true 4K viewing and gaming, you can begin to appreciate just how amazing it really looks. Sadly, though, we found the Acer CB280HK a little washed out.

The colors were good -probably better than anything we’ve viewed in 1080 HD – but next to the other 4K monitors on test, this Acer just didn’t quite hit the mark.

That’s not to say the clarity and sharpness of the screen was poor; it’s just that it wasn’t as good as the other monitors we’ve used this week past.

However, if this is the only 4K monitor you’ve come across, and you’ve upgraded from a 1080 HD variety, then you’ll love the extra quality this monitor will offer.

If, on the other hand, you’re more used to what 4K can offer, then you’ll find the Acer somewhat lacking.

If you’re used to what 4K can offer, then you’ll find the Acer somewhat lacking.

Overall, then, while the Acer CB280HK isn’t the best 4K monitor we’ve ever had the privilege of testing, it’s okay and will certainly suffice for a newcomer to the 4K world. Bonus points, of course, are awarded for the pricing, but for a few pounds more you’ll get a significantly better product.

Overall, then, while the Acer CB280HK isn't the best 4K monitor we've ever had the privilege of testing, it's okay and will certainly suffice for a newcomer to the 4K world. Bonus points, of course, are awarded for the pricing, but for a few pounds more you'll get a significantly better product.