During their time, Wilson’s famous ‘Watt Puppies’ were upgraded on as many as seven occasions, until the Sasha W/P was born (now also in its Series 2 iteration). The Sasha was no longer a standalone monitor with a carrying handle and a matching subwoofer but a fully-fledged modular integrated loudspeaker system.

Legend has it that, on a trip to Vienna, David Wilson had an epiphany that was to prove a turning point in the brand’s sound. The upper bass bravado, midrange jactance and treble alacrity which, by European standards, allegedly afflicted earlier generations of Watt Puppies, were all sensibly dealt with in the (then) revolutionary Sasha project.

The original Alexia drew on the Sasha [HFN Mar ’13], taking the modular approach to time alignment used in the Alexandria and XLF to new levels. Now the time has come to improve the Alexia itself, taking it on to Series 2 status using the knowledge gained from the development of the WAMM Master Chronosonic [News, HFN Jan ’17].

The first challenge for Daryl Wilson, who took over as company CEO in 2016 [see boxout facing page], was to increase the internal volume of the bass enclosure by 10% while ensuring it remained roughly the same size and retained the same footprint as the original. This was no mean task, but it has been achieved by building a six-sided cabinet from a mix of the company’s X- and W-Material with a cut-out at the bottom for the crossover. This eliminates the need for a chamber through which the cable is routed and the variable-gauge Transparent Audio cabling now exits through gas-tight fitting holes.

The 200mm and 250mm paper pulp bass drivers are the same as those used in the original Alexia while the front baffle inherits its gentle slope from the Alexx for improved integration with the midrange. The final touch is the XLF-inspired removable window of clear glass at the rear of the cabinet, which reveals the speaker’s tuning resistors.

The rear chamber has also been banished from the midrange housing, increasing internal volume in this case by 26%. With both chambers removed it was now possible to centre the bass port, which was offset in the original speaker, and turn the two vertical midrange side vents into a single horizontal vent.

More internal space also means room for better bracing to improve rigidity and eliminate panel resonance. Again the enclosure is built from X- and W-Material, but the baffle has been fabricated from S-Material (Wilson Audio’s cabinets are becoming an alphabet soup). What’s more, the enclosure’s side panels have their internal edges milled with an elaborate geometric pattern in a bid to dissipate rearward-reflected energy further.

RIGHT: No bigger than the original Alexia, but with increased cabinet volume. The 1in silk dome tweeter and 7in mid may be aligned and angled with pin-point accuracy. The bass cabinet houses 8in and 10in pulp woofers

‘I revelled in a soundstage glittering with pin-sharp detail’

FROM FATHER TO SON
Daryl Wilson, son, protege and technical heir to company founder David Wilson, seems determined to put his fingerprint on all the latest models designed by his father. Daryl has methodically upgraded Wilson’s stable of thoroughbreds, bar the WAMM Master Chronosonic, which is off limits and will forever remain as David’s final statement to the audio community. Described as his ‘Magnum Opus’ this flagship has served as inspiration to many recent models, including the Alexia S2. Wilson Audio is now a more prolific manufacturer, since Daryl was formally elevated to CEO and President in 2016, although he was involved in design before: the Sabrina [HFN Aug ’15], Sasha 2 [HFN Jun ’14], Alexx [HFN Nov ’16], Yvette [HFN Feb ’17] and now the Alexia S2. What’s next?

or by adjusting the height of the rear supporting spikes in order to tilt it to suit the seating height of the listener. This arrangement can be refined further by placing the rear spikes in a number of pre-set block steps. By rotating both the midrange and tweeter modules on the polar axis you can tune up polar dispersion too, thus widening the usable listening area. Think of it like eating your cake in the sweet spot and sharing it with your family and friends around you.

The tweeter enclosure has a fully redesigned chamber for better rear-wave diffraction and now sports the very same 25mm ‘Mach 5 Convergent Synergy’ silk dome tweeter developed for the company’s WAMM. The position of the tweeter in relation to the midrange can also now be adjusted via a series of ‘half foot’ indentations, said to result in the best possible temporal accuracy.

The speakers were set up in a large and well treated room and tuned by a local distributor. They were positioned some 3.5m metres apart and well away from side and back walls. Associated equipment was of the highest calibre: a dCS Vivaldi One media player [HFN Feb ’18] was used for the replay of CDs and a Rossini DAC for hi-res files; amplification came courtesy of a Dan D’Agostino Momentum preamp [HFN Nov ’13] and Progression mono amps [HFN Jun ’17]; while all cabling was Transparent Audio Opus.

The Alexia Series 2 conveys a feeling of ‘togetherness’, and I don’t mean just a more cohesive and integrated sound than the original due to better temporal accuracy.

It draws you into the performance conjured up by the musicians, making you feel you are part of it. I revelled in the wonder of a soundstage of Biblical dimensions glittering with pin-sharp detail set in a sea of ambience cues.

Macro and micro dynamics were perfectly balanced, improving the sense of pace and rhythm, bass went deeper – though don’t expect a free ride to the centre of the Earth – while midrange transparency saw all veils from vocals removed. I was enthralled. And this was from a seating position four metres away from the speakers.

Bob Seger & The Silver Bullet Band’s Nine Tonight is a live album with some entrancing moments (voice mostly, and simple piano accompaniment) that allow you to dive deep into the live ambience of Detroit’s Cobo Hall. Of course, you can hear the shouting, whistling and cheering of the crowd loud on a desktop radio. But do you feel the excitement of being there yourself?

With the set streaming from Tidal the Alexia Series 2 transported The Silver Bullet Band into the listening room. And this was the case with the hugely popular fado singer Mariza performing ‘Gente Da Minha Terra’ from her Concerto Em Lisboa [EMI, CD 50999 9 58857 2 8].

I know this to be true because I was there, literally, when Mariza became so emotional during that performance she shed tears of sorrow and happiness, and eventually had to stop singing. Time was suspended, ‘tied up with the strings of a guitar’ as the speakers allowed me to relive that spine- tingling moment once again.

LEFT: Back view shows lower-to-upper cabinet connections, rear-firing port, midrange vent and access to crossover resistors. As the crossover is in the main cabinet, it does not support bi-wiring

It was time for an experiment. How would the Grammy-Award winning vocalist Gregory Porter sound singing ‘Mona Lisa’ from his tribute album Nat “King” Cole & Me [Blue Note CD 5791468] compared with Nat ‘King’ Cole’ on his original recording taken from The Unforgettable Nat King Cole [Capitol Records B001AVWJUW]?

Heartfelt as Porter’s tribute might be, the Alexia Series 2 nailed the creamy timbre and silkiness in Cole’s fleecy voice so naturally that I gave up comparing the two discs and sat back to continue listening as Cole sang ‘Unforgettable’ followed by ‘Smile’ before finishing with the upbeat ‘L-O-V-E’. And don’t even try comparing Michael Buble’ with Sinatra. The Alexia Series 2 works as a polygraph. You’ve been warned.

This loudspeaker takes all kinds of music and renders it with its lifeforce fully intact. Whether it was Kendrik Lamar’s ‘Humble’ from the album DAMN [Aftermath CD 060255761 1755] with its gobs of electronic bass and all too explicit lyrics, or the angelic operatic voice of soprano Pretty Yende on Dreams [Sony 889854301 52], her piccolo- challenging coloratura trills giving the speaker’s tweeter and midrange a workout in Donizetti’s ‘Lucia di Lammermoor, Act 3: Ohime!’, the presentation was electric.

Finally, Mahler’s Symphony No 1 engulfed the room, in glorious DSD1 28 from NativeDSD Music [BFO/lvan Fischer; Channel Classics 33112]. The soundstage, imaging and dynamics were overwhelming, from the almost inaudible whispers to the chaotic climaxes. The woodwinds were bewitching, the brass simply breathtaking, and the timpani rolls thrilled with their force.

The Alexia Series 2 delivered all this with flying colours, plus Fischer’s impeccable phrasing and clear instrumental lines. The speakers vanished, as did the walls, and I was transported to the Bela Bartok National Concert Hall in Budapest.

I am tempted to commit the heresy of declaring Wilson Audio’s Alexia Series 2 a better speaker than its earlier and much costlier Alexx floorstander, which I tested basically under the same conditions [HFN Nov ’16]. Of course, there will always remain the important matter of scale. Nevertheless, it at least declares the need for Daryl Wilson to consider an ‘Alexxieva’ in the very near future…

Measuring the Alexia Series 2 in PM’s listening room afforded sufficient space to place the measurement microphone at 2.44m (8ft), the shortest distance for which the midrange and tweeter enclosures can be aligned according to Wilson’s set-up instructions. The results were corrected by 7.75dB to make them 1m-equivalent, to match our normal measurement distance. The shorter time window, caused by reduced time delay between the direct sound and the floor reflection, reduced frequency resolution to about 400Hz, but concerns about accurate integration of the midrange and tweeter outputs through crossover were allayed.

Wilson claims 89dB sensitivity but we measured a pink noise figure of 90.5dB (0.7dB higher than the original Alexia, 400Hz-20kHz), so the spec. is conservative. This is achieved in part through low impedance: 4ohm nominal is specified, with 2.54ohm minimum at 85Hz, but we measured a dip to 2.4ohm at 88Hz. Impedance phase is quite well controlled but still the EPDR falls to a low of 1.2ohm/67Hz, with further minima at 129Hz (1.8ohm) and 410Hz (1.9ohm). So the Alexia 2 presents a challenging load to the amplifier, albeit not so much as its predecessor (min EPDR 0.9ohm). On-axis frequency responses [Graph 1] at 2.44m display a distinct presence band depression and narrow notch at about 4.3kHz. Because of the latter, response errors are high at ±5.5dB and ±5.2dB but reduce to about ±3.4dB if the notch is ignored. Pair matching over the same 400Hz-20kHz frequency range is first-rate at ±0.6dB. The CSD waterfall [Graph 2] indicates low-treble resonances at 3kHz and 6.4kHz, with two further modes above 10kHz. KH 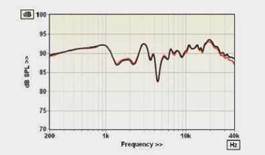 ABOVE: Forward response is extremely extended (bass and treble) but with a depressed presence band 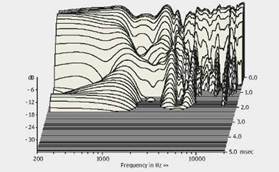 ABOVE: Cabinet resonances are well controlled but there are mild mid-cone and treble dome modes