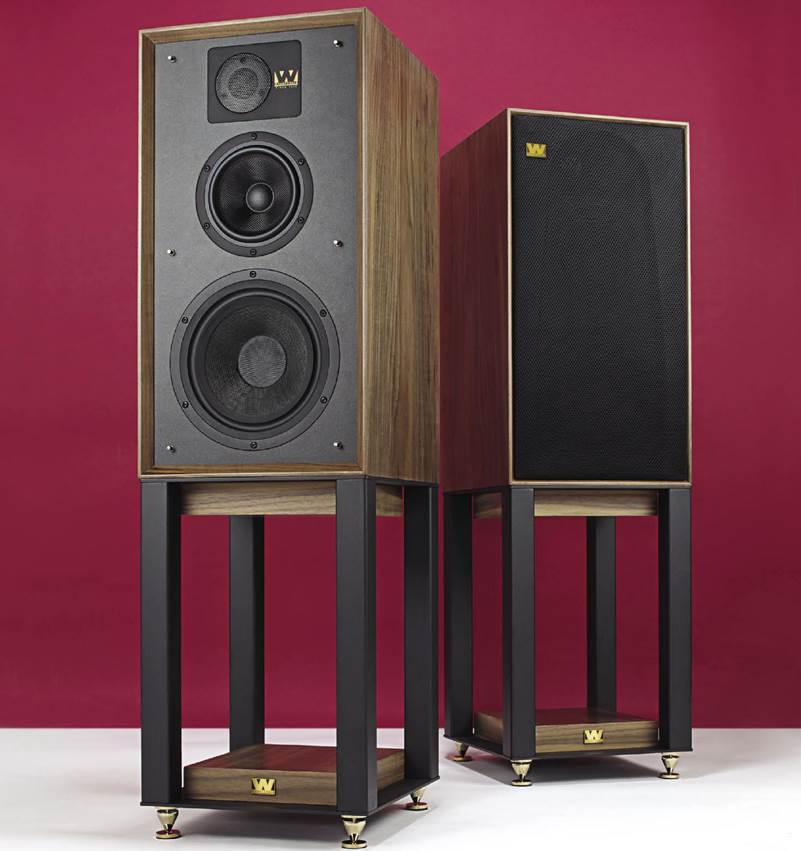 Past values brought up to date – that’s the new Linton 85th Anniversary Edition loudspeaker, price £ per pair. Think a big sound with powerful bass, a sound that will rock you. No messing around here: the cabinets are wide and deep, in true old style. Sound comes first, the narrow front of modern loudspeakers to make them visually less obvious doesn’t figure. And you even get storage for LPs underneath – for an authentic 1970s look.

The new Linton is sort-of big.

It doesn’t stand high, measuring 437mm vertically, where modern floorstanders come in typically at 1000mm. But go to lift it and you’ll know what I mean. Weighing I8.4kgs it’s heavy and solid. The equally sturdy stands, an optional extra priced at £ per pair, lift it to top out at 1010mm. Combined price – you get a reduction – is £.

With a width of 300mm and a depth of 330mm the Lintons stand out rather than fade back. Back in the I960s-70s hi-fi was the third most important domestic purchase after house and car, Philips marketing department once said. Loudspeakers were meant to be seen. And of course they were meant to harmonise (an old term that predates ‘iconic’) with furniture of the time – think wood.

Capitalising on this, the new Lintons are wonderfully finished in hand matched walnut or mahogany wood veneer that has a deep and lustrous finish. As our pics show they are veneered at rear, but not on the front baffle, being purposed for use with grilles on. Paradoxically, 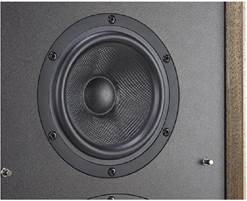 our measurements show the grille is acoustically transparent and makes little difference to the sound balance, unlike the Denton 85th Anniversary Edition; Wharfedale seem to be in two minds about all this.

But no big deal, since grille-on was how it was done in the past, for reasons you will understand if you look at the old Wharfedale Linton XP3 with grille off – using the modern fangled internet. Not a pretty sight, even if that white Leak midrange unit, designed by Alex Garner (Leak/Wharfedale, then Tannoy) was a wondrous device even by modern standards, with damped layer plastic cone and wave breaks.

Which neatly brings me to the drive units! The new Linton has three of them – again in good 1970s style. The idea always was to have one driver – the midrange unit – optimised for critical vocals. Here it is a I 35mm woven Kevlar cone, for low colouration, working from 630Hz to 2.4kHz Wharfedale say. Above is a 25mm (I in) textile dome tweeter and below a 200mm Kevlar cone bass unit – identical bass/mid cone materials being important for subjective coherence. The bass unit is reflex loaded by two rear ports.

Quite a lot has changed in the period between old and new Linton. Bass drivers have become more powerful, using stronger magnets, and computer aided design can now optimise unit to cabinet in the blink of an eye. Whatever you want you can get, design wise. And what Wharfedale wanted here was a well damped system able to play a bass tune right down to the lowest notes, in obvious fashion, but without overly exciting a medium sized room, in order to avoid room-boom. So although these speakers have quite obvious bass power they are not bass heavy, nor loose – as old designed-by-hand systems could be before Thiele-Small parameters were introduced by KEF for the emerging computer.

What you get here is a volumetrically large cabinet that’s able to go low, fitted

with modern computer optimised drive units for a specifically tailored response. In more general terms, the new Linton’s are meant for medium sized rooms, meaning in the 16ft-20ft region. However, our listening room is far larger (6550cu ft) and they still had the power to fill it.

Another way the new Lintons differ from the past is their almost ruler-flat, accurate frequency response, free from the peaks and dips that gave olden- days loudspeakers much of their character. The new Linton’s give it straight, as I think you have to do nowadays. There’s less obvious bite in a short showroom demo – where maximum bite seems to count – but easier and assured long term listening over the years. Through fundamental accuracy you can properly judge the qualities of a recording – as the BBC always demanded in their studio monitors. This is a value worth retaining and good to see the Lintons achieve this, grille on or off.

Rounding things off comes the tweeter which is – natch! – not a metal dome. It is a standard I in (25mm) textile dome that covers high frequencies smoothly – without sharpness or ringiness.

I connected the Lintons to our Creek Evolution I00A amplifier through Chord Company Signature XL Reference cables. Sources were CD and hi-res from a MacBook Pro feeding the DAC section of our Oppo BDP205D player, with its still excellent ESS DAC and linear power supply.

All of which put a lovely 1970s glow on proceedings – I just had to not remember the strikes, riots, rubbish piled high in London’s streets, etc, etc!

Back to nicer things and the feeling of force these ‘speakers deliver. Playing high dynamic range CDs and Hans Theessink’s ‘Mississippi’ the Linton’s put a good forceful edge onto guitar strings, had plenty of stage depth and sounded full bodied in good ‘ol fashion. This made for generously large sound that all but jumped out to surround me. There’s no magic here: a large box with a strong bass unit gives such a sound but I did also get to hear the down side – some boxiness. Kick drum on Hugh Masekela’s Stimela was a little box bound, even though his vocals floated out freely and his trumpet came over as fruitily sonorous. Again think big bodied, generous in sound staging (more depth than width), fast and detailed – the modern bit.

The Linton’s have strong and tuneful bass – no doubt about that. They also went loud quickly and easily, even with our Icon Audio Stereo 30SE. This was another 1970s attribute: if you want to play at high volume they’re clean and easy with it – so I found myself turning volume right up to get immersed, rather than intimidated. It was fun; they’re a very easy loudspeaker to enjoy.

Spinning 45rpm remastered vinyl and an old, old song (1969), Lodi, from Creedence Clearwater Revival, the Lintons drew my attention to Stu Cook’s bass line, where he uses bass as lead, like Noel Redding. Never noticed this before but the Lintons teased it out nicely with their strong bass and good bass damping, making for an informative delivery.

With more modern vinyl and Mark Knopfler’s True Love Will Never Fade the Lintons moved to sounding tubby. This is a fulsome recording and one that suits most loudspeakers, making them sound smooth and rich, but with the Lintons it didn’t work so well.

Marianne Thorsen playing Mozart violin concertos (2L Norway, I80gm) had the Trondheim Soloists behind her in a big space, their instruments full bodied. 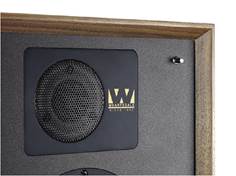 The stage had good depth, if not expanding outward too far. There was plenty of detail in her violin and it was free from rasp.

The Linton 85th Anniversary Edition loudspeakers are big – 1970s style – brought up to date. Full bodied, powerful and eager to go loud. They are also revealing and accurate.

There is some boxiness from the big cabinets but that is what comes with the territory. If you want to go loud and have your socks blown off – just try these!

Frequency response of the Linton 85th Anniversary, measured using third- octave analysis of pink noise, shows basically level output from 35Hz to 16kHz within +/-3dB limits, grille on or off, the grille making little difference. Phase matching between drivers was good and dispersion wide so they differ little on and off axis. Flat frequency response and lack of a mid-range dip at crossover will give the Linton 85 a modern sound balance, one that provides strong midband detail.

The design is slightly over-damped for use close to a rear wall, output rolling down slightly below 200Hz. This ameliorates room-boom, by the use of strong acoustic damping, imposed by two rear ports that add to give a large throat area. Our impedance curve identifies port frequency as 38Hz and the red trace of port acoustic output in our frequency response analysis correlates. The Linton has good output down to a low 30Hz before cutting off sharply – 30Hz being perceived as low, weighty bass.

Sensitivity was good at 87dB, from one nominal Watt (2.8V) of input, enough to go very loud with 60 Watts or so. Impedance measured 6 Ohms

with pink noise so a 40 Watt solid- state amplifier will give 60 Watts here. Since the d.c.r measured 4 Ohms valve amplifiers should be used with the 4 Ohm tap.

The Linton 85th Anniversary Edition has a modern, accurate sound balance; not soft or warm. But it goes very low, has strong bass control and needs little power to go very loud. NK 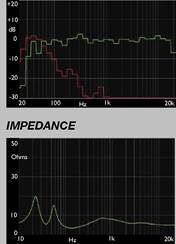 OUTSTANDING - amongst the best. VALUE - keenly priced. Powerful sounding loudspeaker with strong tuneful bass. Some box-boof but a small detail in the big picture.