3D printing never really caught on quite as well as most of us expected it to. By now, we thought 3D printers would be as popular as regular 2D, paper printers. But they’re not.

There are a number of factors that contributed to the lack of a 3D printing revolution, but we won’t get into them all here. However, two of the main contributing factors were cost and ease of use. 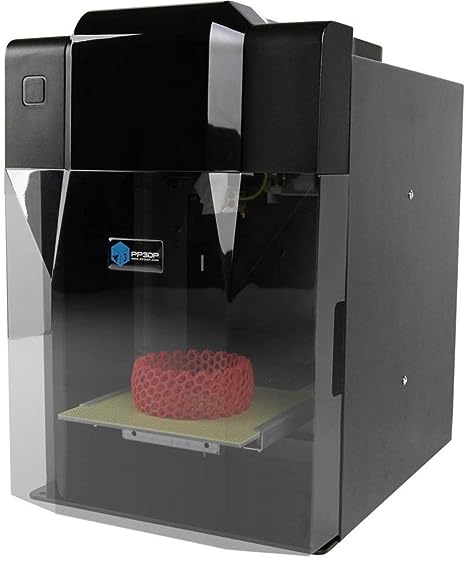 The UP Mini 3D Printer , supplied by Denford Ltd, is an example of how we may yet see 3D printers become regular household items of technology. This is a remarkably compact and lightweight model, measuring just 240 x 340 x 355mm and weighing a mere 6kg. But there’s a lot more to this tiny printer than you would expect.

The UP Mini 3D Printer comes as a complete, built package, so there’s no need to dig out the soldering iron and a collection of different sized screwdrivers in order to build it from a box of parts. The only items that you’re required to install after unboxing are the spool arm fitted to the rear of the printer (which, incidentally, is a 3D-printed component); the actual print head itself, which slots into position easily thanks to three magnets; and the insertion of the print cellboard over the heated print bed/platform.

It only takes a few minutes to carefully put everything together, and once done you can install the necessary driver and UP software to initialize and configure the printer. Again, though, the process of calibrating the printer is a simple enough affair, as all you need to do is initialize the print nozzle and poke the end of the filament spool through a hole in the top of the print head and set the maximum height of the print bed to within a fraction of a millimeter off the print nozzle – all of which can be done by eye.

The included software isn’t quite as complex as other 3D modelling examples available. You won’t be able to create your own 3D models with it, but you can take an already designed STL file and change its scale and position, and you can also fix any angle problems that would cause the printer to fail when it comes to actually printing the object.

Despite the small footprint of the UP Mini 3D Printer, it does offer a decent-sized print size (up to a maximum of 120 x 120 x 120mm) and an optimum layer resolution of 0.2mm. This translates to a reasonably good quality of printed object, available in a number of colors depending on which PLA or ABS reel you install.
We managed to print out a selection of named keyrings, the STL files of which we found on Thingiverse, as well as a dust cap for a Celestron 5SE telescope. Each object printed perfectly well, with a more than acceptable resolution. The minimum time to print was around four minutes for a keyring displaying the name ‘Joel’ and up to 25 minutes for the dust cap.

We were pleasantly surprised that everything we sent through printed first time and without any problems and without the object prising itself loose from the printer platform. We’ve had a few 3D printers in the past, and each had a problem with a poorly heated platform and portions of the object being printed cooling quicker than the opposite side. This inevitably led to the object rising slightly off the platform and causing a collision with the nozzle as it moved through the layers.

Thankfully, the UP Mini 3D Printer features an enclosed chamber where the printing takes place. This works like an oven for the printer and keeps the temperatures inside at an ideal constant for printing. This means you can happily leave the UP Mini 3D Printer printing a bigger, more complex object without having to continually monitor it or create elaborate methods to retain the heat of the platform and nozzle.

The UP Mini 3D Printer currently from Denford Ltd, and with this you get the printer itself, a 700g spool of white ABS filament, a set of heat protecting gloves, a power brick, a USB cable, a six-piece precision modelling knife, three cellboards, a pair of snips, tweezers, a scraping tool and the necessary tools to maintain the printer during its lifetime.

The only slight problem we had with the supplied components is the relatively small USB cable, but since the UP Mini uses a standard Type-B USB connection, it was fairly easy to find a longer version that could stretch from the PC to the printer.

The UP Mini 3D Printer is the entry-level model available from the range, and it does a fantastic job of getting the user up and running within minutes. It’s fast, easy to use and is small enough to sit on a desk without taking up too much room.

With Windows 10 offering the 3D Builder app as standard, now may be the ideal time to get into 3D printing, and we can certainly recommend the UP Mini 3D printer as the ideal foundation.