Ah yes – Cool Britannia, Absolutely Fabulous, Blur vs. Oasis – remember it well! As the nineties slowly morphs from contemporary to historical, let us pause and reflect on the hi-fi of that decade. CD players were king, floorstanding loudspeakers were just beginning to catch on and we suddenly saw a procession of Japanese-made budget amplifiers which were “tuned for British ears”. It was all the Pioneer A-400’s fault as I remember, and this started a fashion for Sonys, Kenwoods, Marantzs, etc. all fettled especially for us. 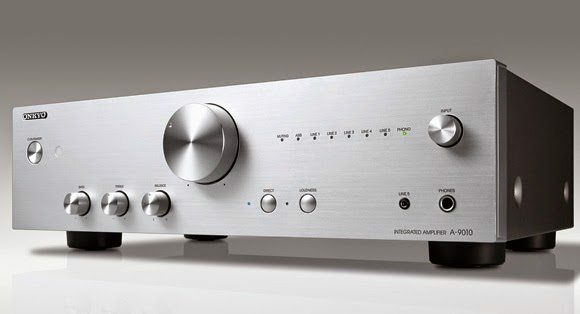 Quite what the difference is between British and Japanese ears was never made clear then, and isn’t now. Perhaps it’s more useful to talk in terms of taste and environment. When I lived in Japan in the nineties, I was struck by how different the houses and apartments were – many use tatami mats extensively and this gives a well-damped sound compared with the average British abode with carpets and painted walls. Another consideration is that Brits tend to buy different loudspeakers to Japanese audiophiles, too. Either way, it’s nurture not nature..

Now some two decades later, Onkyo has started to ‘channel’ the nineties, and has come up with its very own British-tuned products. The company’s British operation is blessed with good enthusiastic people who know a decent sound when they hear one, so a UK-tuned amplifier was always going to be an interesting thing. It has started with a standard A-9010, stripped it of its built-in DAC (which appears in some markets, but not the UK), and fettled it into an audiophile product. Given its price, the challenge was to make substantial upgrades to its sound, without spending so much money that it would no longer be an entry-level stereo amplifier..

Onkyo’s British tuning team retained the lion’s share of the 9010’s internal gubbins – including its ‘Wide Range Amplifier Technology’ circuitry, which is said to privilege current drive over output power; to give good ‘real-world’ driving ability even when the speaker impedance drops and increases the load. Interestingly, instead of the usual Class D modules you might expect for such a product, the A-9010 uses discrete low impedance Darlington output transistors from Sanken running in Class AB. Many audiophiles still believe this to be the best compromise between sonics and practicality, but it’s less common than it used to be. The result is a claimed 44W RMS per channel in an 8 ohm load, which is just about enough to drive most speakers in most British rooms..

A series of tweaks were made to, as Onkyo puts it, “deliver a sense of warmth and body” to the musical performance. A large, frame-type power transformer and beefy extruded aluminium heat sinking was fitted, along with four audio-grade capacitors. The circuitry all sits on a chassis designed to isolate the components from sound-degrading external vibrations, and there are chunky gold-plated speaker terminals..

The Onkyo may be a little more finely fettled than some, but it’s still a Japanese budget amplifier – and to this end it comes with a predictable list of facilities that haven’t changed since the seventies, let alone the nineties. So you get a moving magnet phono stage (not discrete transistor, via an IC), a headphone output stage (via a 6.3mm socket), tone and balance controls and a good range of inputs; four on the back via RCA and a mini-socket on the front for your portable. It’s well turned out for the price, with a nice sleek brushed alloy front panel and the pressed steel casing isn’t as flimsy as one might expect. With smooth controls and a generally robust feel, Onkyo has done a good job of hiding its budget origins..

Having reviewed a number of budget Japanese amplifiers over the years, I have a good idea of what to expect. At this price they tend to have a bright and breezy sound with a slightly metallic upper midband, vivid treble and a decent but rather vague bass. The overall sound is usually pleasant, and at first you think it is really rather impressive at the price. But extended listening tends to reveal quite an insipid and prosaic sound; it’s not bad, but it completely fails to involve the listener. This is precisely what the Onkyo has to avoid, and after about 10 minutes of use it is clear that it doesn’t fall into such a trap. Indeed, right from switch on I find it a particularly bouncy thing, with lots of energy and drive. This stands in marked contrast to the sat-upon sound that some rivals at or just slightly above its price serve up..

First inside the CD player is Kate Bush’s Cloudbusting. It’s a beautiful song made with distinctive eighties synthesisers and samplers, and can sound quite shut in, yet shrill on vocals. The Onkyo copes surprisingly well and rises to the challenge better than expected. Kate’s voice sounds icy, yet doesn’t veer into harshness – unlike some other budget amplifiers I have tried. It’s a difficult one to get right, because many smooth amps flatten it and strip it of its sparkle, while brighter ones can grate. The A-9010 (UK) treads a well-judged middle path and places it fairly deep into the mix. Behind it sits those distinct sampled drum patterns, which can sound curtailed on lesser amplifiers because they’re highly damped and nowhere near as lively as you would expect drums to be. Again the Onkyo takes a sensible middle path, and seems fast and lithe enough to capture much of their energy and impact, without pushing them unduly to the fore. On a good system the relatively murky mix of this album begins to open up, and there is definitely a sense of this happening here..

Next up, some superbly crafted seventies rock courtesy of Steely Dan. Aja is a masterpiece of its age, and still sounds superb to this day. For a rock recording it is very dry, but with a good amplifier it can fill out and command the room. The title track proves impressive; Donald Fagen’s voice can be a little nasal and forward, and the close-miked piano sometimes comes over as brittle with cheap solid-state electronics; but the A-9010 (UK) takes things in its stride and shows its fine natural balance. It’s quite a dynamic recording and so quite a workout for a relatively low-powered amplifier such as this, but the crashing drum kit breaks don’t throw the Onkyo. In absolute terms, it doesn’t quite have the range of a more powerful design at three times the price, but it seems to make the most of the power it has. That powerful bass guitar line that underpins the song is given good weight, and is enjoyably supple and tuneful too. The song’s various stops and starts, bridges and middle eight all have a real sense of coherence, showing this amplifier to be well capable of keeping a grip on the proceedings – again this isn’t something you can take for granted down here in the cheap seats!Moving to some classic jazz in the shape of Miles Davis’ So What, the Onkyo continues to impress. This is less complex than Aja, but demands rock-solid control to properly convey the infectious rhythms, and a decently realistic tone to handle that soaring trumpet. The A-9010 (UK) isn’t out of its depth here either, zooming in on the drum section and giving a nice, full-bodied piano sound. It’s way more convincing than you have a right to expect at the price, and manages to snap the recorded acoustic into sharp focus and locate the instruments with a decent degree of precision. The soundstage is surprisingly wide too, although it’s a little two dimensional compared with an amplifier at twice the price. It gives some sense of depth perspective, but if you want proof that it isn’t entirely blameless, then this is where you should look. Nevertheless, it serves up a beguiling and enveloping sound and makes this beautiful jazz standard a pleasure to hear. This is something I cannot say about anything else at or near the A-9010 (UK)’s price..

The first job of any budget amplifier is not to sound horrible, and the Onkyo a-9010 review (UK) breezes through this challenge with ease. Then it goes on to make a really rather lovely sound that completely belies its cost. It’s not the greatest amplifier in the world of course, but what it does wrong never offends the ear, and it hides its tracks brilliantly. What it does right is something that plenty of amplifiers costing many times as much cannot do – which is to sound unerringly musical and fun. Forget about the UK-tuned amps of the nineties, the Onkyo’s combination of bargain basement price and unalloyed sonic charm reminds me of the classic NAD 3020 of the late seventies. It’s a recipe that appeals far beyond the beaches of Britain, I dare say.