MSI GT75VR 7RF Titan Pro Review – What happens when you put the equivalent of a complete desktop into a notebook chassis? How about if you include a bit of the desk? MSI’s GT75VR 7RF Titan Pro answers that question with an everything- including-the-kitchen-sink attitude. 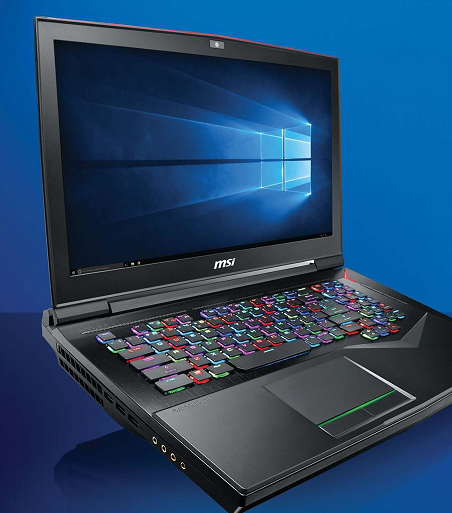 The Titan Pro’s size matches its name, but so does the noise it makes.

For starters, it’s gigantic, even by desktop-replacement standards. We’ve tested some large laptops over the years, but at more than 2.2 inches thick, the Titan Pro is absolutely massive. A good portion of that is due to the cooling solution, with more than 10 heat pipes, dual exhausts, and twin super-large, 29-blade fans (more on those later). Adding to the heft is the SteelSeries mechanical keyboard, and while its removable keycaps are still chiclet in style, they have a satisfying click that feels great to type and game on.

The Titan’s insides are quite impressive as well. Computing duties are handled by an Intel Core i7-7820HK processor paired with a whopping 64GB of DDR4-2400 RAM. Storage is capacious, too: 1TB of fast storage, courtesy of two 512GB M.2 PCIe SSDs in RAID 0, paired with additional storage via a 1TB 7,200rpm HDD. The former is definitely impressive, offering read/write speeds of 3,391/2,947MB/s in CrystalDisk QD32 sequential. It also scored excellently in PCMark 10 Express, with 4,395, one of the highest scores we’ve seen in a laptop form factor. Though, again, this is really much more of a desktop replacement than an actually portable laptop.

The GT75VR is available in several SKUs, dependent on how you like to game. For the display, you can choose between a 4K IPS panel or a higher refresh rate 120Hz 1080p screen that’s unfortunately a TN panel—though both offer G-Sync. The unit we tested featured the former, and while colors looked great, it left us wanting more. We generally try to avoid 4K screens on gaming laptops, as the GPU power required to maintain 40fps in the latest games is difficult even for top-end desktops. The GT75VR we tested was outfitted with a single GeForce GTX 1080, which is more than capable at 1080p but can struggle at 4K. (There are also single and double GTX 1070 SKUs available.)

Let’s look at some numbers. The Titan Pro’s GTX 1080 performed well in our 1080p gaming tests, scoring 76fps in Total War: Warhammer Il’s battle benchmark, and 61fps in the super-demanding Ghost Recon: Wildlands. It was able to handle the slightly older Rise of the Tomb Raider even more easily, scoring an average of 110fps across the game’s three-part benchmark.

However, our machine had a 4K screen, so it made sense to test at that resolution, too. At that more demanding resolution, the single GTX 1080 struggled. Rise of the Tomb Raider, the easiest of the gaming tests, returned scores of 53fps in the Mountain Pass, 44fps in Syria, and 43fps in the Geothermal Valley, for an average of 47 fps—not great. Meanwhile, the more demanding TW: Warhammer II and Ghost Recon: Wildlands proved even more difficult, with 30 and 29 fps, respectively.

In other words, the single GTX 1080 couldn’t maintain 60fps at 4K in any of the games we tested, and while you can drop to 1080p, you’re then saddled with the 4K screen’s more limited 60Hz refresh rate. And if you opt for the 1080p 120Hz panel option that’s available, you’re stuck with a TN screen. For a machine with these sort of internals, we would have much preferred a high refresh rate 1440p IPS screen- especially at this price point.

One other thing to note is the fans. The GT75VR boasts a robust cooling system, featuring MSI’s “cooler boost” technology. It certainly succeeded at keeping things cool, but it was incredibly loud doing so. Even after tweaking some settings, the fans made a ton of noise whenever they spun up even a little bit. For all the hubbub over impressive cooling tech—not to mention the massive chassis—we hoped that things would stay quiet during regular gameplay, cranking up the volume only when pushed to the absolute limit, -bo moore