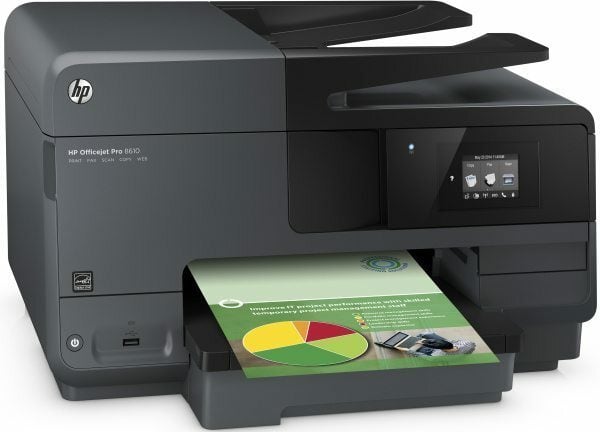 Mark is pleasantly surprised by a budget office printer from HP

Having seen a slew of multifunction printers recently, I’ve realized that the differences between them often come down to daily running cost, and not initially outlay. That’s critical in the typical small office scenario, because a low print volume printer can get a sudden shock to the system should the business rapidly start growing.

Some products score highly on initial outlay, but are less desirable when you start looking at cost per page when ink becomes a major overhead. Or that’s the theory, because the HP Officejet Pro 8610 e-All-in-One – at least in respect of running expense – appears to entirely contradict the cheap printer/high ink cost model we accept as standard. After you’ve take advantage of the HP cashback offer, you get a single bin printer that can also copy, scan and fax with automatic two-sided duplex printing. Its wireless and wired network compatible, cloud capable, has a 35-sheet document feeder for the scanner, offers borderless output and it can print even print directly from a USB key.Another plus point is that HP gave the Pro 8610 four ink cartridges (CYMK), and these are coupled to a print engine designed to generate 1200 dpi black output or up to 4800 x 1200 dpi colour, on photo quality paper.Print speeds are a more than acceptable 19ppm for black and 14.5ppm for colour for normal quality, though it can go even quicker in draft mode. First page arrives in around 12-13 seconds, so waiting for the printer won’t be a major office complaint.Like the majority of its competitor products, the HP Officejet Pro 8610 e-All-in-One uses a repurposed phone touch display to control user requests. It’s a small 2.65” one, but the interface is easy to follow and responds well to chubby fingers jabbing at it..

So where is the HP Officejet Pro 8610 e-All-in-One less wonderful, then? Well, as these things go, this is a very big plastic box, measuring a minimum of 499.3 x 468.9 x 300.5mm. With the output tray deployed it becomes 647.5mm deep, a scale that would be difficult to ignore on a typical workers desk. Yet, curiously, being so large it’s actually not that heavy, at a snip under 12kg. That’s good if you need to move it, but not enough weight to stop the printer swaying gently when engaged in full speed operation.

That hints at a build quality that’s not the greatest you’ll find out there, and that borderlines on flimsy in some other respects.

The single input tray, for example, is a weakness – in that you can’t use alternate stock, and if you want to use envelopes you’ll need to remove any A4 paper first. The output tray is also holds substantially less than the input, which could cause issues on a big print run.

However, what’s critical to either a home or small business user is how much a typical monochrome or colour page is going to cost them. Because, historically, using inkjet output isn’t the cheap printing option; in fact, it can cost a fortune.Like most inkjet printer makers these days, HP makes two sizes of cartridge for its designs – and the ‘XL’ ones offer the best cost option. The HP 950XL and is good for 2,300 pages at 5% coverage. That’s a cost per page of 1p, and those are at official ink prices, which I’m sure you can better elsewhere than HP’s own store.

The colour CL ink but only hold enough for 1,500 pages, which – with all three colour inks in use – works out at about 3.4p a page.That’s cheaper than many multi-function inkjets we’ve come across, especially older designs that use the annoyingly inefficient three-colours-in-one cartridge design.

The only caveat is that some of Canon’s latest designs, like the more costly Maxify MB5350 I covered recently, are even a little cheaper at printing than this model is.For those who don’t mind a printer that’s the size of beached whale, and only need single paper source printing, the HP Officejet Pro 8610 e-All-in-One is actually a much better value device than I’d initially expected.Not only is it cheap to buy, but the running costs are very affordable too. I just wish it was engineered to a higher specification. Because in this context ‘office’ is just another word for ‘abuse’, and I’m concerned as to how much of that this printer could reasonably take.Thankfully though, as a promotional deal, HP is offering a three year warranty currently.