Cowon’s Plenue D2 portable digital player is a tiny pocket wizard. It is small enough to be stashed anywhere, has a claimed 30 hour playback life with hi-res and – Cowon claim – packs a performance not bettered elsewhere. I hardly believed their figures – but they’re true.

However, there are some points to consider. The D2 is purposed as a very high quality portable for headphone use; it has no digital output for connection to a hi-fi DAC, nor a digital input for use as a computer’s headphone amplifier. You get small size allied to high performance but – and here’s a wrinkle – the claimed performance is only available from the unit’s tiny 2.5mm balanced headphone jack. OK, the unbalanced 3.5mm jack isn’t far off, also offering a great result.

Weighing 98gms on our scales, the D2 feels solid but not overly heavy. Measuring 79.2mm high, 53. I mm wide and 15mm deep it will even fit a shirt’s top pocket and – happily – Cowon put both headphone outputs on the top face, not the bottom like some. However, there’s no rotary volume control at top, only a circular power button that looks like one. Volume is set by a small side rocker – inconvenient – and volume level readout is numerical only, positioned beside the battery level indicator at top right. Beneath the volume control lies a Play/pause button and forward/back track skip.

The D2 comes with 64GB of internal storage for music and this can be boosted by using a micro-SD card of up to 128GB. Plenty enough for MP3 and CD files, but DSD comes in at 100MB a track or more remember – and the Plenue D2 plays DSD if you so wish.

The user interface has been kept reasonably simple and obvious, making the D2 easy enough to use, but the graphics are inevitably a bit on the small side. Since this is a touch screen you have to peck at small active areas, but sensitivity was good, making for a reasonably assured response. Startup was almost instantaneous, at around 5 seconds and the screen is bright and clear; I had no trouble reading it, unlike some. An info screen gives bit depth, sample rate, data rate and type encoding.

Cowon supply the D2 with a 120cm long cable with a micro- USB to USB A plugs for charging or computer connection. The unit will play whilst on a charger and is compatible with both Mac and PC, updating automatically when loaded with new music files I found – a nice touch. 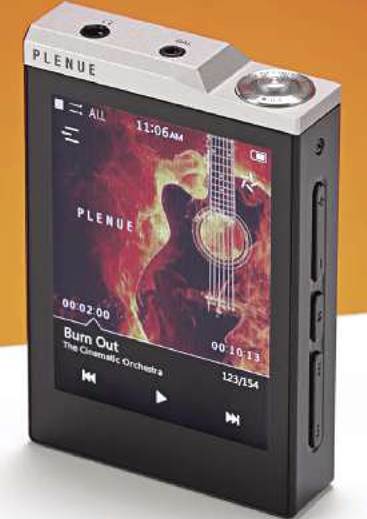 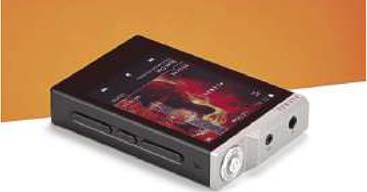 At top a 3.5mm headphone socket (right) and a smaller 2.5mm socket that provides balanced output. The circular control is a power button only.

Music file formats are Wav, Flac, WMA, MP3, AIFF, ALAC, Ape and Ogg, plus DSD of dff, dsf and Iso headers. DSD64 and 128 are supported. A five band equaliser is fitted, plus no end of special effects. Buried in the Music settings menu are fast and slow digital filters but they have only subtle sonic effect, especially with hires. 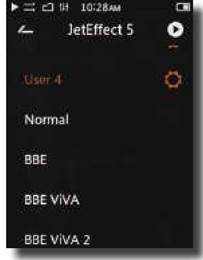 A host of sound effects are provided, Normal being the straight-through option.

Portable player manufacturers make much of their technologies, a trend set by Astell&Kern, also of Korea like Cowon. This has spawned an arms race between companies in Korea and China, one that Cowon seem determined to win with the D2. They equip it with a CS43131 dual DAC chip from Cirrus Logic, that has built in headphone amplifiers – hence the optimised figures. Our measurements confirmed Cowon’s claims (see Measured performance). They’re right up with the best hi-fi DACs. Under the skin, this tiny player is more than it looks.

However, whilst the balanced output socket gives massive volume and extraordinary dynamic range, I find 2.5mm jack plugs virtually unusable – they snap. Suitable for driving a hi-fi system perhaps where the plug will not be stressed – if you can find a 2.5mm 4-pole plug to XLR male plug adaptor lead and your hi-fi 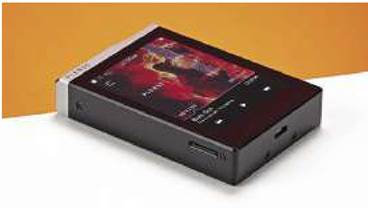 A micro-SD slot on the left side of the player accepts up to 128GB of extra memory storage.

has XLR balanced inputs. Not suitable for the rough and tumble of portable use, where the stronger 3.5mm plug is needed. These comments apply to all players with 2.5mm balanced 4-pole jacks of course, not just to the D2. All the same, the D2’s 3.5mm unbalanced headphone output still gave superb results under measurement.

My overwhelming impression of this player from the 3.5mm jack was a sense of silky smoothness that took the digital out of digital. But that’s how modern DAC chips are evolving sound quality wise – and the new (Oct 17) CS43I3I DAC chip designed for portable use is an impressive newcomer to the field.

The prominent violin of Marianne Thorsen playing Mozart’s Violin Concerto in G Major, backed by the Trondheim Soloists (2L Noway, 24/96) was both vivacious and deeply detailed, yet free from that rasp digital adds. There was strong separation of instruments in the backing Trondheim Soloists, and from her lead violin. The delicacy of her playing was conveyed strongly, especially in solos, making for a sound that drew me in.

With Marta Gomez singing Maria (24/96) her vocals sounded close and detailed, surrounded by a sense of cosseting smoothness. No hardness here either, with accordion and blocks nicely defined. With Fleetwood Mac’s classic rock Go Your Own Way (24/96), replete with sizzling 70s pace set by Mick Fleetwood’s frantic drumming, the D2 fairly flew along. Interestingly, where I hear rasp from this track in cymbal crashes via Chord Electronics revealing Hugo TT2, the Plenue D2 seemed able to gloss over the issue. All was smooth 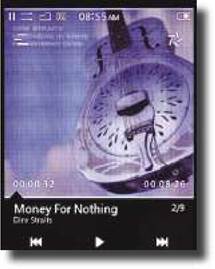 The main play screen with transport controls and cover artwork. 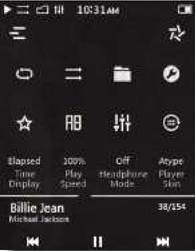 and easy, yet lively all the same, Stevie Nick’s vocals rising out from the rock melee behind her.

Popping in a micro-SD card loaded with DSD, rather than my card of selected PCM review tracks, I was greeted by better DSD rendition than usual; Cirrus Logic have nailed this one. The CS43131 smooths PCM to DSD presentation in this player, but Diana Krall’s Narrow Daylight (DSD64) edged it out as easier, clearer and more fluid in progress. Cyndee Peter’s singing House of New Orleans (.dsf, DSD 128) had strikes against a triangle ringing sweetly in one of my ears, and cymbal strokes with a brush obvious in the other. This track has hard left and right images and the D2 reproduced them strongly, perhaps 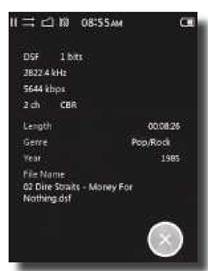 due to its on-chip dual DACs. Easy going yet with nice dynamic push, Cyndee Peter’s warbling slightly too far back in my view, due to the mixing, not this player; Eric Burdon’s original was grittier.

I couldn’t resist connecting the 2.5mm balanced output jack direct to the balanced inputs of our Creek Evolution I00A amplifier and thence on to Martin Logan ESL-X hybrid electrostatic loudspeakers to see how it fared acting as a high quality balanced analogue source. It retained its sense of creamy smoothness, if with the soft bass digital players usually exhibit from their battery power supplies; digital connection into a mains powered DAC is 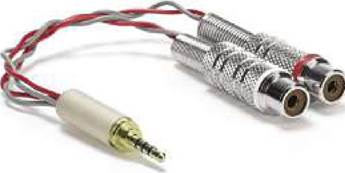 The 2.5mm 4pole balanced output jack can drive a balanced amplifier input through XLR plugs. This is our test adaptor.

punchier but not an option with the D2.

Cowon’s pocketable Plenue D2 sets performance standards in digital – remarkable for such as small, unassuming device. I found it fast to start, fast in response to screen inputs and easy to use. It lacks digital output or input, being a basic player for headphones, although both headphone jacks will drive a hi-fi system via analogue connection via adaptor leads, with the player working from 5V USB power supply. In this fashion it can be seen as an alternative to a CD player – one also able to play hi-res digital.

A fine player then, well worth its price. 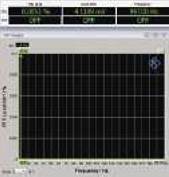 jack. This is enough to go loud with all headphones, even high impedance types. It is also correct for driving a hi-fi amplifier’s line input: the D2 can be used as a ‘CD player’ in effect.

Distortion values (24bit, -60dB) were exceptionally low, just 0.008% from 3.5mm out, and 0.005% from the 2.5mm out (balanced). As a result EIAJ Dynamic Range values were 128dB and 133dB respectively, a stringent way of confirming Cowon’s claimed SNR value of 130dB. These are exceptional figures, ahead of all hi-fi DACs.

Frequency response (192kHz sample rate) measured flat from 5Hz to 84kHz with the Fast filters and just slightly less with the Slow filters; there was little difference to the amplitude response.

The Plenue D2 delivers impressive measured performance, ahead of all other players – and most hi-fi DACs too. NK