How much is Too much? Or, why not more? That’s the question Acer’s Predator 21 X asks just by existing. An exercise in excess, the 21 X is a behemoth of a laptop—if you can call it one—that crams every possible bell, whistle, and kitchen sink you can think of inside its not-so-svelte frame. Except when it doesn’t. 21-inch curved ultrawide screen? Check. Full-size mechanical keyboard? Check. Top-end internals? Check. High-resolution panel? Nope. 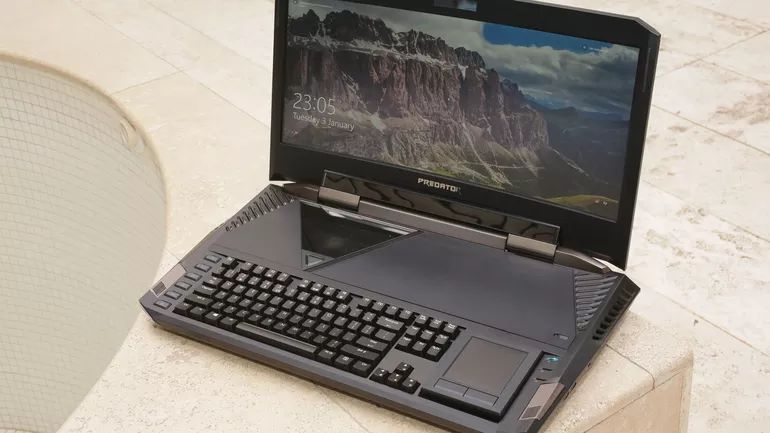 Before we get to that questionable design choice, let’s talk about what it’s like to use a laptop that’s upward of four times more expensive than a high-end desktop. Of course, laptop is a bit of a misnomer. Sure, it’s an all-in-one system with a mouse pad, keyboard, and screen that folds down in a clamshell—you know, the traditional hallmarks of what we call a “laptop”—but this is not the kind of machine you’d situate on your lap. First off, it weighs more than 18 pounds, not including the two massive 330W power bricks. That alone should be enough reason, but there’s also the front- situated keyboard that makes general use awkward, not to mention the massive fans spitting hot air out of the back. Ouch!

Portable desktop-replacement would be more accurate. But even then, is the Predator 21 X that portable? It’s not exactly the kind of rig you can toss in a backpack and take through airport security. In fact, the system ships with its own custom Pelican carrying case—a gargantuan wheeled box that you might expect to house a photographer’s entire livelihood. The (even larger) cardboard box it shipped in was so big that we were able to fit our editor in chief, Tuan Nguyen, completely inside. Solid Snake would have been proud.

All of this is to say that the Predator 21 X is hardly portable, which for a laptop, amounts to a contradiction that in many ways sums up the machine as a whole. This is the system that asks “why not?” Yet, we find ourselves asking “why?” For all the power and engineering inside, it’s saddled with a comparatively low resolution panel that clocks in at a mere 1080p.

About that power. The Predator 21 X is outfitted with a nice suite of top-end internals. An Intel Core i7-7820HK pairs with 64GB (because why not?) of DDR4- 2400 RAM. Primary storage is handled by two 512GB PCIe SSDs in RAID 0 (again, why not?), with a backup 1TB SATA HDD for good measure. And for pixel-pushing, two GeForce GTX 1080s in SLI. Why not, indeed.

If you’ve paid attention to some of our previous dual-GPU system reviews, you may remember a common thread: SLI does not play nice with 1080p. Most dual- GPU laptops we’ve tested before sported 4K screens, and top-end dual-GPU rigs are usually similarly intended for higher ­resolution gaming—if not at 4K, then 1440p at 144Hz. And yet here we are: two GTX 1080s in SLI chained to a criminally low resolution 1080p panel.

Now, it’s worth noting that the Predator 21 X’s panel is indeed a 21:9 ultrawide format, meaning the actual resolution is 2560×1080, as opposed to the standard 1920×1080. But even so, we found the lower resolution’s issues with SLI performance to exist nonetheless. In some games, SLI played nice and offered frame rates in

the realm we expected. The Division, for example, consistently returned a score of 115fps with SLI enabled using its built- in benchmark on the highest available graphics preset, as opposed to 81fps without SLI. Far Cry Primal was a different story. It also scored around 81fps without SLI, but the frame rate dropped down to an average of 63fps with SLI turned on.

Rise of the Tomb Raider had the same issue. Without SLI, the game’s three-part benchmark returned an average of 103fps. With SLI, that score dropped to 80fps. To make matters even more confusing, enabling DirectX 12 seemed to help SLI performance—raising the score to 127fps on average, but also introducing extremely noticeable bouts of lagging frames. Not exactly an enjoyable viewing experience.

All of this is to say: why? For all the excessive “shoot-the-moon” attitude that went into the Predator 21 X, why not go all the way and outfit it with a proper screen? It doesn’t even have to be 4K—we’d be plenty happy with a high-refresh-rate 1440p panel. But 1080p? That’s unacceptable. For we expect the best. -bo moore