Switching from a hard drive to an SSD is one of the best ways to speed up a PC. We show you what to buy and how to install it

There are all sorts of ways that you can tweak your PC to get it to work faster, but the single most effective upgrade we know is to transfer Windows off your mechanical hard drive and install it on a solid-state drive (SSD). Like RAM (Random Access Memory), which is the superfast memory that your computer uses to hold the information it’s currently working on, SSD technology uses banks of computer chips that can store gigabytes of information. This is even better than RAM, because it doesn’t disappear when you turn off your computer.

Because there are no moving parts, SSDs are much faster at seeking and retrieving information, and finding convenient places to store new stuff. Modern mechanical hard drives are fast, but they still rely on spinning disks, which makes them significantly slower at all these tasks.

In this Group Test, we put 17 SSDs through their paces. However , as with most upgrades, it’s not as simple as popping out your old hard drive and slotting in a new SSD, particularly because there are two connection standards: SA TA and M.2. See our boxout below to check what you need.

We measured the maximum read and write speeds of each SSD using CrystalDiskMark 5.21. The results are shown in our charts on the opposite page. Because this is a pure speed test, it doesn’t automatically follow that it reflects real-world performance, so to test this we used Futuremark PCMark 8 to see how quickly the SSDs perform when carrying out real Windows tasks.

For each test, we also included the results from a standard mechanical hard drive – a 1TB Seagate Barracuda – so you can see the difference in performance. You’ll find these at the bottom of our charts.

Our Gold Award-winning SSD is the Samsung 960 Evo, which looks expensive on paper, but it ’s a 500GB model that uses the M.2 connection and it came at or near the top of all our performance tests, so we think it ’s worth the extra outlay. The higher-spec Samsung 960 Pro is slightly larger and faster, but doesn’t make such a marked improvement that it ’s worth paying the extra. The biggest difference between the two is that the Evo has a write tolerance of 200TBW (Terabytes Written), whereas the Pro is rated at 400TBW. This means that the Evo drive is capable of writing 200TB of data before it starts to fail.

One of the drawbacks with SSDs is that they have have a shorter lifespan than mechanical hard drives. However, this problem has been much improved in recent models so even if you write 5GB a day to the SSD, it ’ll still last 10

The main decision when buying an SSD is which type of connector to choose. SATA SSDs use the same data and power connectors as a regular mechanical hard drive, so they should work with most PCs built in the past 10 years. Most modern PCs have a selection of SATA connections placed along the edge of the motherboard near the existing hard drive.

The problem with SATA is that its performance is limited to around 550MB/sec. You’ll still notice the benefit compared to a mechanical drive, but you won’t realize the full potential of the drive’s memory chips.

This is why most manufacturers have embraced M.2, which is a new type of miniature slot designed specifically for SSDs. M.2 is based on the standard PCI expansion slots that components such as graphics cards use to connect to a PC’s motherboard, and can offer five times the bandwidth of SATA, giving a theoretical top transfer speed of 3,940MB/sec. However, even the fastest modern drives can’t come close to that speed yet.

Most new PCs have an M.2 slot on the motherboard even if they don’t come equipped with an SSD. It ’s often next to the expansion slots alongside the removable plates at the back of a desktop PC.

Check your PC’s motherboard for M.2 1 and SATA 2 ports

years – probably outliving the the PC you’re installing it in.

The Evo comes with Samsung’s Data Migration tool, which handles the fiddly business of cloning your existing Windows installation from your old hard drive to the SSD. The drive also has built -in AES-256 encryption, so you can lock the entire drive if you’re using Windows 10 Pro with BitLocker or if your PC’s BIOS supports another form of drive-locking.

If £200 seems like far too much money to spend, our Silver Awardwinner – the Adata Ultimate SU900 – is less than half the price of the Samsung 960 Evo. It also only provides half the storage (256GB) but if you just want to run Windows and a few key programs from your SSD, and are willing and able to keep your mechanical hard drive for storing everything else, it ’s perfectly sufficient. The SU900 is a SATA drive, so it should be easy to install in most PCs, and it ’s the only SSD in this test that comes with an adapter for a 3.5in slot, the most common size in desktop PCs.

No SATA drive can match the performance of an M.2 drive, but the Adata Ultimate SU900 is one of the fastest of the SATA drives we tested and it crept further up the results when put through our real-world tests. The drive also comes with Acronis True Image HD 2015, which is a great tool for migrating everything from your old drive to the new one.
If you’re more concerned with space and value than performance, the Bronze Award-winning Crucial MX300 is our top recommendation. This SATA drive has 525GB of space so it ’s rightfully joint-top in terms of price-per-GB.

The downside is that it isn’t particularly fast, although it will still provide a significant and noticeable boost over a mechanical hard drive. It also comes with the same Acronis True Image software as the Silver Award-winning Adata drive, but with the added ability to encrypt the whole drive, which Adata doesn’t provide.

Despite missing out on one of our awards, there were plenty of other noteworthy drives in our test. The Adata XPG SX8000 is an M.2 drive with 512GB of storage space. It wasn’t the fastest M.2 drive in our performance tests but it is rated at 320TBW, which is impressive for a drive of this price, making it a good option if you intend to use its impressive capacity to store files as well as Windows and a few programs.

As well as M.2 drives, Samsung also manufactures SATA models, such as the Evo 850.

This costs almost the same as the Crucial MX300 and has just slightly less capacity (500GB), but it ’s a little faster and comes with Samsung’s migration tools.

The high price of the WD Blue is offset by its whopping 1TB of storage space, which made it joint-top for value for money. This SATA drive’s mammoth capacity is its stand-out feature, and it performed reasonably well in our tests, too. 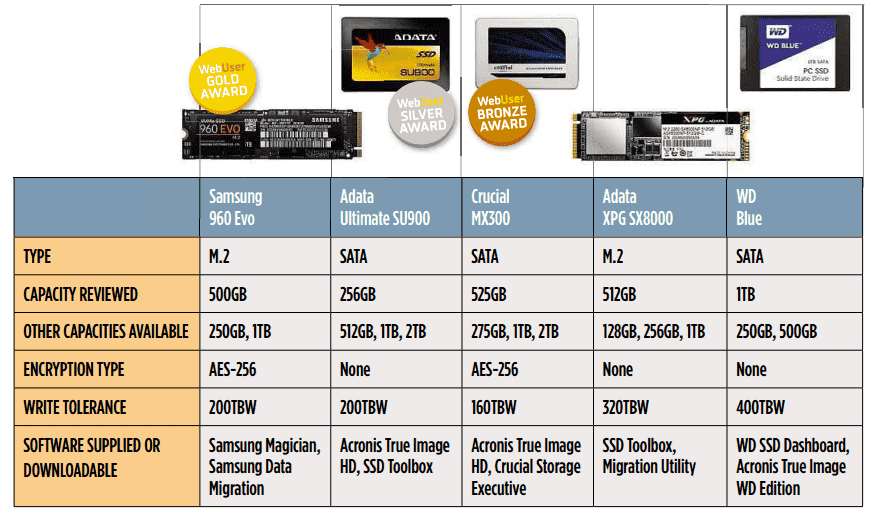 Our Gold Award goes to the Samsung 960 Evo, a 500GB SSD with an M.2 connection. It offers a great balance between price, capacity and performance, and comes with a suite of useful software tools to get you up and running.

The Adata Ultimate SU900, wins our Silver Award. You only get 256GB of space, but that’s plenty to run Windows and your most-used software, and its SA TA connection mean it will work with most PCs.

In third place, the Crucial MX300 isn’t going to wow you with blistering speeds but it’s still much faster than a standard drive. It provides excellent price-per-GB value and its migration software lets you encrypt your entire drive.