Do you use your PC for working in Windows, playing games or watching movies? Or all three? Andy Shaw tests five affordable models to help you find the perfect display for your needs

Monitors come in all sorts of shapes, sizes and resolutions, and the best one for you will depend on what you mostly use your PC for. We’ve picked out a selection of five models in this Group Test, ranging from just under, to suit every purpose. The more expensive models tend to have high resolutions and serious gaming features, but those at the other end of the scale offer everything you need for general use. If your monitor is starting to let you down or you fancy a new model that performs better, look no further.

We test each monitor with a calibration device, which uses its own software to measure the percentage of sRGB colors that each one can display. We measure this out of the box. without adjusting the settings, because most people don’t have their own calibration equipment. We also measure the contrast ratio (which indicates how well a monitor can pick out detail in dark images) and the maximum brightness.

The AOC Q2781PQ’s bezel (the plastic surround encasing the screen) is just 8mm thick, which means the display takes up 93% of the entire front of the monitor. This makes the screen appear larger and more spacious than its actual dimensions because the viewing area feels less boxed-in. 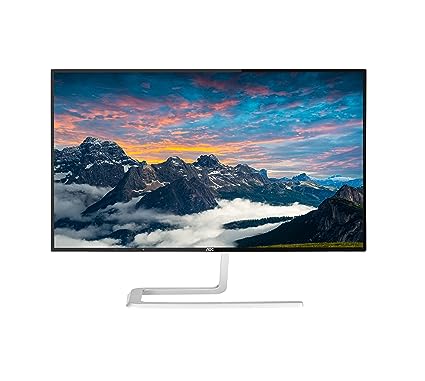 The monitor’s curved metal stand adds a further touch of class, and has the added benefit of saving space on your desktop. For the most part, the AOC monitor is only 15mm deep and only thickens slightly where the stand meets the screen. Overall, its design looks more high-end than its price tag implies.

The monitor’s interface pops up from the bottom of the screen and is simple enough to use, but there’s little reason to fiddle with it – we found the monitor’s setup was almost perfect the minute we plugged it in. Our color calibration tool measured 97% of the standard sRGB color range without needing to tweak the monitor at all, which makes it incredibly easy to use.

On the downside, we noticed some light leaking from the top-left corner of the panel when the monitor was displaying a pure black image. You won’t notice this in day-to-day general use but if you’re specifically looking for a monitor to play games or watch movies, this may become distracting.

Furthermore, the screen has a relatively slow 4ms response rate and was prone to ghosting (blurring and double images) when showing fast-moving objects, such as the scrolling scenery in a racing game. For that reason, it’s not best used for gaming, although it’s perfectly sufficient for most general-purpose use.

This is a good-value monitor with impressive image quality and a classy design. It’s well set up. so you don’t need to worry about calibrating it or tweaking its settings. However, you may find the backlight bleed and relatively slow pixel-response time is distracting when playing games. But if you’re after a monitor with a resolution of 2,560×1,440 pixels to accompany a general-purpose Windows PC -rather than an entertainment model -this is the one to buy.

If you dismissed our Gold Award- winner because it doesn’t match up to your gaming needs, this liyama should get your pulse racing. It’s a 28in 4K-resolution screen with a 1ms response rate (the length of time it takes to change from one pixel color to another) and FreeSync technology that further enhances fast-moving games (so long as you have an AMD graphics card). The viewing angles are narrow, so it’s best for solitary use rather than as a display for a family PC, and we had to carry out some major tweaking to get its color properly balanced. This took it from displaying 86.6% of the sRGB colour palette, when we first set it up, to 96.3% after calibration.

It performed well in our games tests, though, especially considering the price, and provided the kind of performance you’d expect from far more expensive models.

You’ll need to put in a bit of effort to get the best color accuracy from this monitor but once you do, you’ll have a great 4K-resolution monitor at a very reasonable price.

If you’re on a budget (or looking for a second monitor for a multi-screen setup), this 23.6in liyama model is ideal. It’s surprisingly attractive for such a cheap screen, with a 12mm bezel and a practical, unfussy stand, which also lets you rotate the display by 90 degrees into portrait mode. It has HD resolution (1,920 x 1,080 pixels), and single HDMI, DVI and VGA connectors.

The screen produces deep blacks and accurate colors straight out of the box. We measured 94.3% of the sRGB color range. Contrast was also excellent, partly because it has a very deep black, with very little light leaking out. This makes it particularly good with text, and displaying detail in dark images and movies.

Its control buttons are hidden at the back of the monitor, which looks neater but makes them tricky to use.

This is a good-quality monitor for general-purpose Windows use, and it comes at a great price. Its menu controls are a bit fiddly but it comes well-configured out of the box. so you shouldn’t need to use them once you’ve set the brightness.

This 27in Samsung model is the only curved monitor in our Group Test. Its 1,920 x 1,080-pixels screen doesn’t come cheap – you’d pay £80 less for the Bronze Award-winning liyama – but the curvature of the screen gives it a dynamic, modern feel and helps immerse you in whatever you’re viewing.

The screen’s default settings are fantastic, displaying 99.2% of sRGB colors and a very high contrast ratio. With a color calibrator you could easily make this perfect.

If you’re buying this monitor to play games, you’ll find plenty of further options to tweak, including the same FreeSync technology that’s on the Silver Award-winning liyama. You can also tweak its response time, which speeds up the length of time it takes the monitor’s pixels to change from one color to another.

This is an attractive monitor with a good-quality screen, but a lower resolution than our Gold- and Silver-award winners. However, we think curved screens work better on a larger monitor and are a bit of a gimmick on this smaller model.

The XG2401’s price tag may feel rather steep for a 24in screen but it’s aimed at gamers and is brimming with features and specifications. It has support for AMD FreeSync. a very high 144MHz refresh rate, a 1ms response time and its own technology for making pixel color changes even faster.

Before calibration, the screen was capable of displaying an impressive 96% of sRGB colors, though we nudged it up to 98% with our calibration tool. The high refresh rate makes everything look smooth, which is great with games but also gives Windows animations a slick feel that you might not get with other monitors.

However, we found it gave black text a pink tinge when scrolling in basic Windows applications, which we couldn’t fix with any of the built-in controls. You can’t see it during gaming but it’s distracting when you’re trying to work.

With a premium build quality to match the price, this is a fantastic gaming monitor with a very high specification and great extras. However, problems with the text color when working in Windows make it a poor all-rounder. 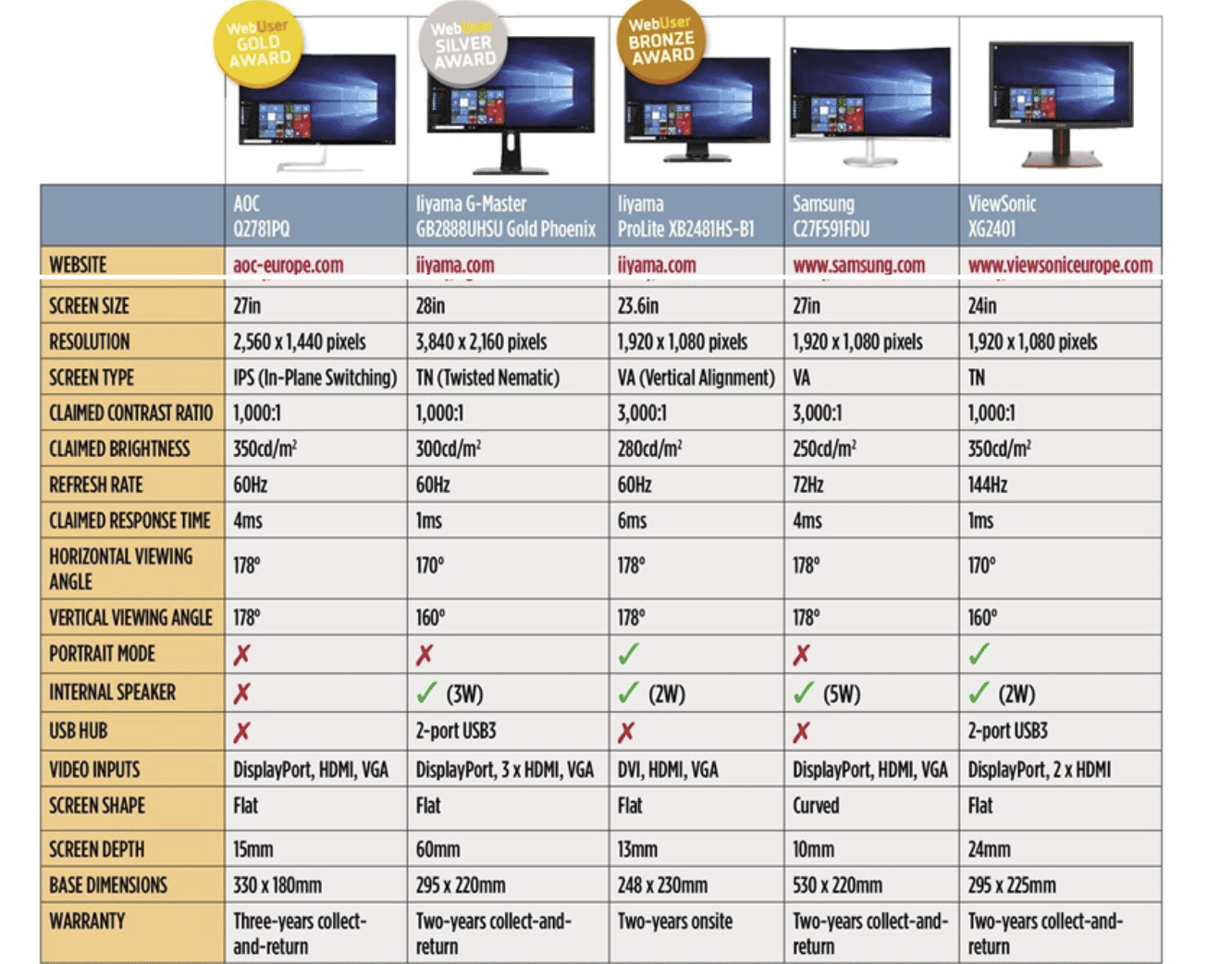 The AOC Q2781PQ wins our Gold Award because it’s a great monitor for Windows users. It comes well set up so you can use it straight from the box, it has an attractive design and is good value for money. The only thing wrong with it is that it isn’t the best choice if you play a lot of games.

If gaming is more important than Windows performance, consider the Silver Award-winning liyama G-Master GB2888UHSU Gold Phoenix. You’ll need to do a bit of setting up to get the best color accuracy from this monitor but it’ll be worth it, especially if your PC can handle its game-boosting tools and 4K resolution.

Our Bronze Award goes to the liyama ProLite XB2481HS-B1, which is surprisingly affordable. It’s a smaller screen than our other award winners, but it’s a great all-rounder.