Microsoft’s latest tablet, the Surface Pro 4, has been designed to replace your laptop. Here we look at whether the tech giant has succeeded. 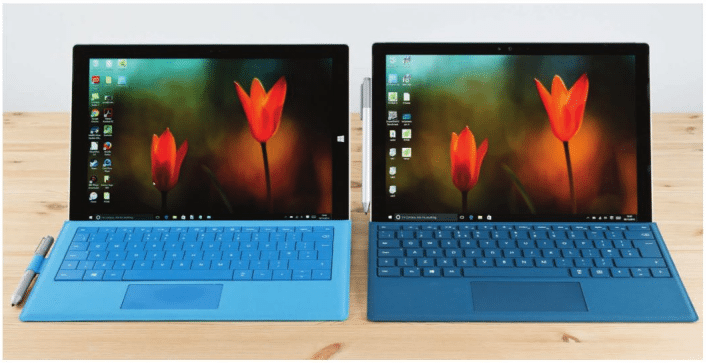 It’s more expensive than its predecessor, but Microsoft has pretty much gone to town when it comes to improvements and upgrades. Although this is the entry-level price, you can spend up to a whopping for a top-of-the-range model. That’s a lot of money, especially since you’ll have to pay extra for the keyboard Type Cover. The Surface Pro 4 certainly isn’t a winner when it comes to value. 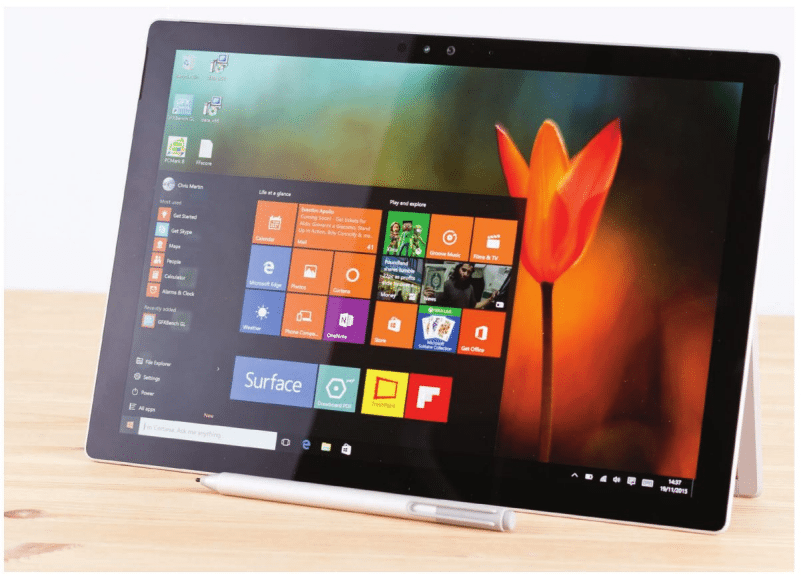 A spanner in the works here is that there are plenty of laptops offering a decent Windows 10 experience for less money, so the Pro 4 isn’t necessarily the right purchase for everyone. If you’re deciding between the Surface Pro 4 and a MacBook Air, for example, the latest models from Apple and, come with everything you need. For that price you get a smaller 11in size, though.

You won’t buy this as a gaming machine; it’s just too expensive compared to buying a real gaming laptop with a proper GPU. But if fortune smiles upon you and you possess the stunningly designed and manufactured Surface 4 Pro, take heart that it can do games – as long as you have an i5 or i7 model with the better integrated Intel graphics.

The unusual native res is 2736×1864, but if you need to drop that to gain frames it holds up better than most, retaining a crisp and sharp look down to around 1440×900 or so. At that res, a playable 40fps can be expected from Battlefield 4 at low detail. 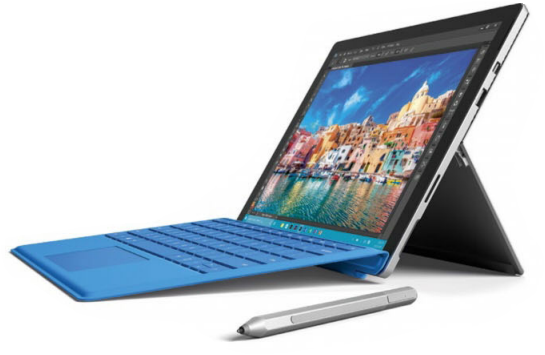 Fan noise is an issue when the CPU is loaded, but it’s not ear-piercing in pitch and is surprisingly bearable for long periods. The noise that matters more comes from the hidden speakers and it can be so good al Limes it’s startling. It’s clear, has same power behind it. too, and holds up very well at full volume.

Assuming you also have the Type cover, the plus is the new and wider glass trackpad, however even the springier keys, much im proved from the Surface 3, areh’t up to the task of twitch gaming.

None of this should be a surprise.

The Surface 4 Pro is a work machine – a very beautiful work machine – and it can be purchased in many greatly varying configurations. At the high end the i7 with 512GB of SSD (NVMe, no less) is the one to have for mobile gaming, but (inc keyboard) is a foolish spend when smarter alternatives are abundant.

Initially, you could easily mistake the Pro 4 for the Pro 3 (see below), but on closer inspection there are some significant changes that make a big difference to the overall experience.

It’s thinner and has a larger screen without a bigger overall size thanks to thinner bezels. Microsoft said that it’s as thin as it can get without being forced to get rid of the USB port – and we would have been disappointed if the firm had chosen thickness over the USB.

Just 8.45mm is impressive for a device with the kind of high-end specifications on offer here. All of this also means the device is lighter at 766g for the Core M model – this is because it doesn’t require a fan, so you can add 20g if you opt for a Core i model.

You wouldn’t want to use it for long periods of time in one hand, but it does make a difference overall with handling and carrying. Let’s face it, the Surface is has been designed for use on a flat surface.

Otherwise, things are pretty similar with the same design as the Pro 3, including the kickstand, camera placement and port placement. The thinner bezel around the screen means the touch sensitive windows button is gone, while the volume rocker is now on the top next to the power key. 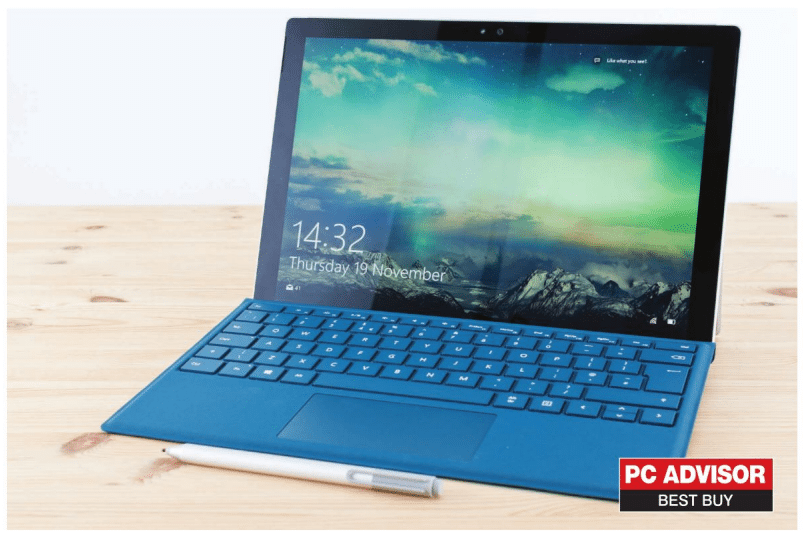 This is so that the Surface Pen, still included with the tablet, can be attached magnetically to the left side. This is a lot better than the Surface Pro 3, which allowed you to attach the Pen on the right side, though, the hold was very weak and it covered the power port.

The screen on the Surface Pro 4 is larger than that of its predecessor, though the size of the tablet hasn’t increased. It’s jumped a little from 12- to 12.3in, which isn’t huge but does make a difference. Also important is the resolution, which is now 2736×1824 resulting in a crisp and clear pixel density of 267ppi.

As you might expect, the Surface Pro 4 comes with Windows 10 Pro and it looks great on the PixelSense display. Overall, it’s one of the best we’ve seen on any laptop or tablet offering excellent all-round performance. There are top-notch viewing angles, plenty of brightness, great contrast and accurate colours – the list goes on. 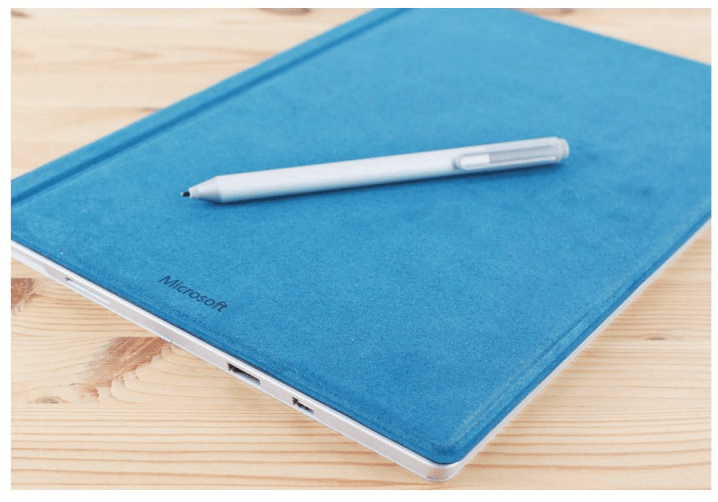 Microsoft has listened to the demands of its customers and provides up to 16GB of RAM and up to 1TB of storage for its top-of-the-range model, so power users will be pleased. Of course, those with lower requirements can simply choose a lower-spec model. Things start at 4GB of RAM with a 128GB SSD and improve the more you’re willing to spend.

Unfortunately, the 1TB model is not currently available in the UK, so the highest spec model you can buy comes with 512GB. This is a real shame as it’s a big feature of the Pro 4, we’re hoping that things may change in the near future. We received the following statement from Microsoft on the subject: “We do not comment on pending market availability. That said, we have taken and will continue to take a measured and phased approach to Surface Pro 4 availability to meet customer demand and partner expectations.”

Inside the new slender frame of the Surface Pro 4 is a sixth-generation Skylake Intel Core M3 processor, though could get a Core i5 or Core i7 if you wish. That’s a lot of power on offer inside a 12in tablet, but as mentioned earlier, you’ve got to pay a decent chunk of money if you don’t want the entry-level model.

The Surface Pro 4 has USB 3.0, a Mini-DisplayPort and a microSD card reader. The front camera remains at 5Mp, though the rear camera has been upgraded to 8Mp should you find cameras on a tablet useful – arguably the front camera would be more suited to the enhancement for video calls.

Those are the core specs, but it’s also worth noting that the Surface Pro 4 comes with 11ac Wi-Fi and Bluetooth 4.0 once again.

Microsoft claims the device is 50 percent faster than a MacBook Air and 30 percent quicker than the Surface Pro 3.

Our review sample came with a Core ¡5 processor, 8GB of RAM and 128GB of storage. We put it head-to-head with a Core ¡5 Surface Pro 3. We can’t say we’ve seen a 30 percent improvement, but the Pro 4 is certainly better than its predecessor. On the MacBook front, as you can see from the table, it’s not 50 percent faster compared with a Core ¡5 model from 2013 – at least in a Geekbench 3 benchmark which primarily tests the CPU. 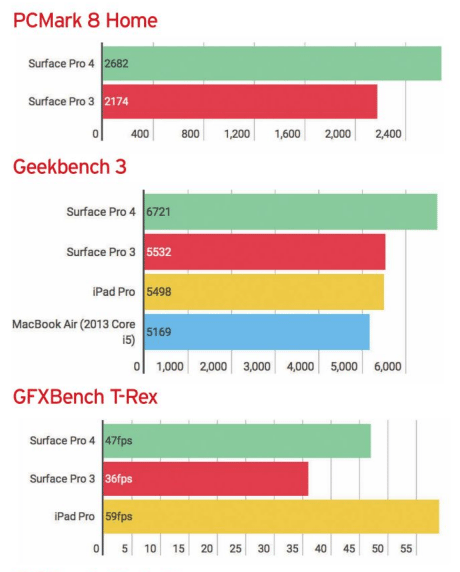 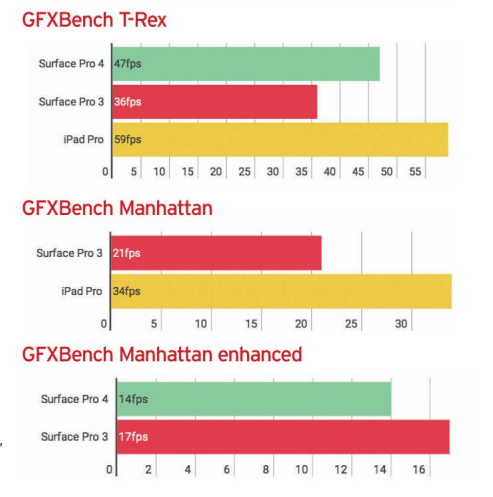 Benchmark figures (right) are one thing, but real-world usage can often be very different. On this front, we can vouch that the Pro 4 is a speedy machine indeed.