Not small or pretty – but it does the business.

Ford Transit, the Medion Erazer takes the term ‘mobile’with a pinch of salt. It weighs nearly four kilos, has a full 17-inch display panel, and would very likely break your spine if you tried to walk it from your house down to… anywhere at all.

And it isn’t worried about this in the slightest. Because this machine is tremendously well-endowed down below. 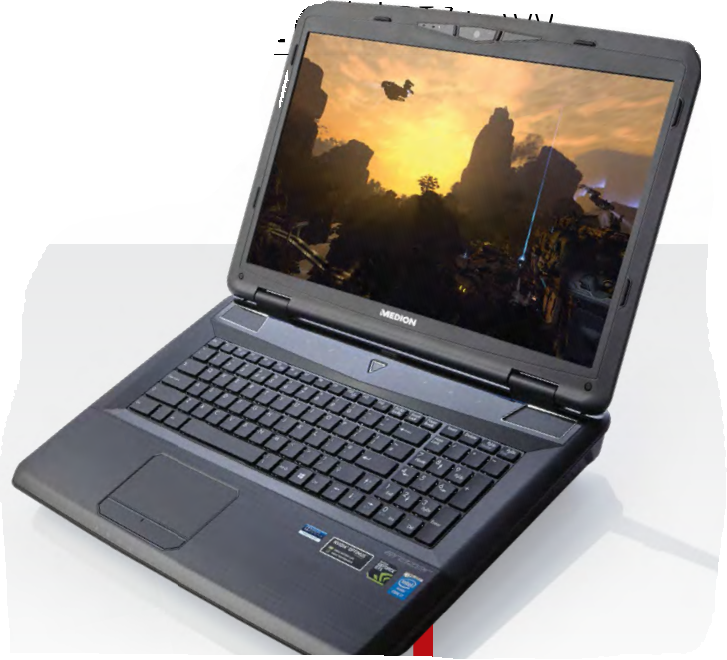 Actually, we’ve steered into some really weird territory here so let’s be explicit: the CPU and integrated GPU powering this monstrosity can handle just about any game you care to throw their way, in full HD and ultra graphics settings, and still produce a genuinely playable frame rate.

Not in a “It’s 2007, I’ve managed to get Crysis running at 14fps and that’ll have to do” sort of way. We’re talking about a rock-solid 60 frames per second in all but the most GPU-intensive games. Thanks to the snazzy i7-4710MQ CPU and integrated GTX 870M GPU, this computer has sprinted the PC Format gauntlet at impressive speeds, posting the second-best frame rate in Metro: Last Light’s ultra-gruelling benchmark test. Above it? Asus’ G750. There are just five frames per second between the two. The Erazer X7829 offers great value performance – that’s what we’re trying to say.

There is little else to shout about on this hulking mass of a laptop, though. The keyboard is functional and without fancy flourishes. While the laptop’s screen does have a native 1080p resolution and a matt display, its colors are still pretty dull in comparison to Asus’ lively G550JK, which we have reviewed on p28.

At the sides and rear of the chassis are some ugly and ungainly cooling vents, which are very much required given the meaty GPU within. 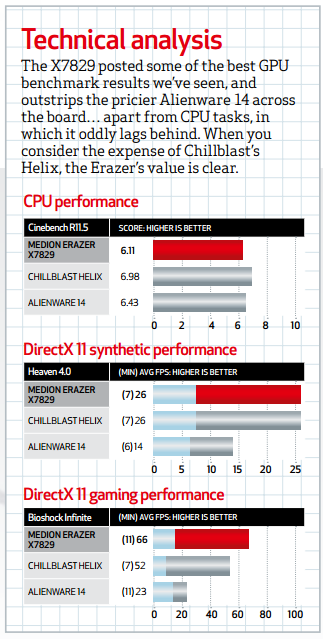 Nevertheless, we reckon they could have been designed to be far more visually discreet.

The Erazer X7829 is extremely quiet, even while you’re playing a game and thrashing its components, but inevitably it also gets very hot.

This machine comes from the old school of gaming laptop design, where function reigns on high and finesse is for all those namby-pamby iPad-swiping sissies.

Fat stuff Just how portable you find the X7829 machine depends entirely on how closely your body resembles Dwayne “The Rock” Johnson’s, but if you’re looking to save some space in your home this will actually make a highly capable desktop PC replacement. There are HDMI and DisplayPort outputs if you need a bigger screen, and five USB ports (three USB 3.0 and two USB 2.0) for various gamepads, keyboards and mice. The machine also comes equipped with a Blu-ray/ DVD drive so you can enjoy all your favorite films while you’re out and about.

With all these whistles and bells its weaknesses are nullified – but if you are really keen to game on the move, we’d highly recommend picking one up and walking around with it for a bit before you decide to commit to the purchase.